Leptin was discovered over 20 years ago and has since been shown to be essential for the regulation of body weight and energy homeostasis. Genetic and acquired lipodystrophy syndromes are rare conditions in which leptin deficiency plays a key role, and are associated with insulin resistance and hypertriglyceridaemia, which can lead to the development of life-limiting comorbidities. Patient registries have been established in the USA and Europe to better understand lipodystrophy syndromes and to improve the clinical outcomes for these patients. Traditional therapies are aimed at addressing the hypertriglyceridaemia and hyperglycaemia. More recently, metreleptin, an analogue of human leptin, has been investigated in association with diet as a treatment for these patients and has demonstrated significant and sustained metabolic benefits.

The discovery of leptin has significantly advanced our understanding of lipodystrophy and the associated severe metabolic, endocrine and immunological consequences.1 Over 20 years ago leptin and its receptor were shown to be key players in the regulation of body weight and energy homeostasis,2 which was subsequently shown to be due to leptin binding to its receptor on neurons in the hypothalamus.3 Leptin is produced mainly in adipocytes, and blood levels are strongly correlated with the overall levels of body fat.4,5

Inherited or acquired lipodystrophy syndromes are rare disorders characterised by a generalised or partial loss of adipose tissue in association with severe metabolic disturbances.6 The loss of adipose tissue results in low levels of leptin; deposition of fat in ectopic locations (such as liver and muscle); and metabolic abnormalities such as insulin resistance, hypertriglyceridaemia and diabetes, which can result in life-threatening comorbidities.6 It has been hypothesised that replacement of leptin in lipodystrophy syndromes could be beneficial by improving the metabolic variables that can result in life-threatening comorbidities.6 In this report we examine the pathophysiology of leptin deficiency, and the role of leptin replacement in patients with genetic or acquired lipodystrophy.

What is leptin deficiency?

Adipose tissue plays an important role in the process of generating energy (adenosine triphosphate) from dietary nutrients, as well as regulating insulin sensitivity through the control of lipid metabolism.7 It is responsible for the secretion of adipokines, which have both pro- and anti-inflammatory properties.8 The most extensively investigated of the anti-inflammatory adipokines is adiponectin, which plays an important role in insulin sensitivity.7,8 There are also a number of pro-inflammatory adipokines, whose expression has been correlated with insulin resistance.7,8Leptin is an important adipokine with a role in the regulation of blood glucose levels through critical pathways within the central nervous system (CNS) and CNS-mediated effects on the periphery. Leptin receptors are expressed on some peripheral tissues but direct effects on peripheral tissues are less clear.8,9 Leptin levels have been shown to significantly correlate to total body fat,4,5 and in addition to its role in regulating glucose levels, leptin appears to regulate fatty acid oxidation as well as modulate insulin sensitivity.10,11

In obesity, resistance to leptin results in high circulating leptin levels, which is correlated with pro-inflammatory responses and a chronic sub-inflammatory state.8,11 In lipodystrophy, there is a loss of subcutaneous adipose tissue, with redistribution of fat to non-adipose tissues, such as such as the liver, giving rise to the development of fatty liver disease.7 The reduction in the circulating levels of leptin to undetectable or very low levels, as a result of decreased adipose tissue mass, is associated with a number of deleterious metabolic consequences.7,12–14 Patients present with hypertriglyceridaemia and insulin resistance with an increased risk of diabetes.15 These metabolic disturbances can lead to the development of acute pancreatitis, non-alcoholic fatty liver disease (NAFLD), non-alcoholic steatohepatitis (NASH), cirrhosis and cardiovascular disease.15

Lipodystrophy syndromes require expert management and patients should be referred to centres of excellence. There are now two patient registries in the USA and Europe. The LD Lync Study in the USA (ClinicalTrials.gov identifier: NCT03087253) is a multicentre, collaborative, prospective, observational, natural history cohort study, which will investigate the natural history of these rare syndromes, especially genotype-specific causes of morbidity and mortality, in approximately 500 patients with genetic lipodystrophy.20 Patients will be assessed on a yearly basis for approximately 4 years to collect clinical, metabolic, morbidity and mortality data. Initial results are expected in 2023. The Registry for Patients With Lipodystrophy (European Consortium of Lipodystrophies [ECLip] Registry; ClinicalTrials.gov identifier: NCT03553420), based in Europe, has been established to gather knowledge on lipodystrophy syndromes, including information on diagnosis, clinical presentation and comorbidities, the natural course of the disease and family history.21 Data will be gathered over a 50-year period and it is hoped that this data will provide new insights into the pathophysiology of lipodystrophy, improve the therapeutic options for the patients and provide improved information material for patients, families and relevant professionals. Medical centres from all over the world where patients with lipodystrophy are treated are being invited to join the ECLip Registry.

How to treat lipodystrophy

Lipodystrophy syndromes are heterogeneous in nature. Traditionally, the wide range of metabolic problems in lipodystrophy are tackled with the available therapies directed to the metabolic manifestations.22,23 The treatment of lipodystrophy ideally should ameliorate both the metabolic disturbances and pathological changes in fat distribution, but such a therapy currently does not exist.22 Treatments designed to directly address hypertriglyceridaemia and hyperglycaemia are often only partially effective, with insufficient glycaemic control in most patients with lipodystrophy, and can be associated with adverse events; for example, hyperinsulinaemia can result from the use of high-dose insulin.23 As such, research is ongoing into more effective treatment options.

In a proof-of-principle study, nine female patients (four <18 years of age, five ≥18 years of age) were enrolled and treated with metreleptin, a recombinant human leptin analogue, for 4 months (0.03 mg/kg <18 years of age, 0.04 mg/kg ≥18 years of age).24 All of these patients had low leptin levels as an inclusion criterion for the trial. The first patient treated with leptin therapy had an especially remarkable response within the first 4 months of therapy, allowing discontinuation of plasmapheresis therapy. In the entire cohort, leptin-replacement therapy led to clinically significant metabolic benefits, including decreases in glycosylated haemoglobin and triglyceride levels.24 On the basis of these findings it was proposed that leptin deficiency might be the chief contributor to the metabolic abnormalities associated with lipodystrophy.24 Due to the exciting results seen in the first nine patients, leptin treatment was expanded over time to include patients with not only generalised but also partial lipodystrophy.25 The dose was modified to address either inadequate metabolic control or excessive weight loss, with a maximum daily dose of metreleptin of 0.24 mg/kg.25 The treatment resulted in significant and sustained improvements in glycaemic control and dyslipidaemia across both generalised and partial lipodystrophy patients included in this particular study.25 When the clinical effects were investigated over the long-term (3 years), substantial reductions in glycaemic variables, triglycerides and liver enzymes (alanine aminotransferase [ALT] and aspartate aminotransferase [AST] levels) were observed.6 When the results were analysed according to patient type, greater benefits were observed in patients with generalised lipodystrophy than those with partial lipodystrophy.19

NAFLD and NASH are features of lipodystrophy.26 In an open-label prospective study, treatment with metreleptin (0.06–0.24 mg/kg dose, adjusted to achieve metabolic control) resulted in a significant decrease in the number of patients meeting the criteria for NASH versus baseline (33% at mean 26 months on treatment versus 86% at baseline, p=0.0003) and resulted in significant improvements in steatosis grade and NAFLD activity scores (p<0.0001).26 In addition, there was a significant improvement in metabolic profile, as well as ALT and AST levels. There was no improvement in fibrosis.26

Long-term efficacy data from a cohort of 55 patients receiving metreleptin treatment have demonstrated clinical benefits for glycaemic variables, triglycerides and liver enzymes in patients with inherited or acquired forms of generalised and partial lipodystrophy (Figures 2–4). Long-term safety analysis of this cohort identified T-cell lymphoma in two patients with acquired lipodystrophy who had immunodeficiency at baseline.6 There was an additional case of a lymphoma in a 13-year-old child who had no evidence of haematological abnormalities at baseline. There was no convincing evidence that metreleptin treatment increased the risk of de novo development of T-cell lymphoma.6 However, the use of metreleptin in patients with acquired lipodystrophy and haematological or bone marrow abnormalities should be carefully considered and monitored.6 Other notable adverse events reported in this patient population were likely attributable to underlying medical conditions (e.g. pancreatitis, chronic renal disease and chronic liver disease), which are often present in patients with lipodystrophy.6 In addition, there were six reports of hypoglycaemia, all in patients receiving concomitant insulin, suggesting this could have been due to improved insulin sensitivity in patients receiving high doses of insulin at the initiation of metreleptin treatment. There were also reports of weight loss in 5% of patients, which might be expected due to the mechanism of action of metreleptin.6

The results to date for metreleptin treatment in lipodystrophy suggest that long-term treatment for generalised lipodystrophy is generally well tolerated and can produce significant and sustained improvements in glycaemic control, hypertriglyceridaemia and liver volume.27 In addition, metreleptin treatment has been shown to significantly decrease glycated haemoglobin (HbA1c) and triglyceride levels in patients with partial lipodystrophy.28 Overall, these results support the hypothesis that treating generalised lipodystrophy as a leptin deficiency syndrome can improve the metabolic outcomes in affected patients,29 since the metabolic complications of lipodystrophy are key factors in patient morbidity and mortality.30 In partial lipodystrophy, not all patients have very low leptin levels. However, administering metreleptin to patients with low leptin or more severe metabolic complications has been shown to reduce HbA1c and triglyceride levels.19

The current recommendations for generalised lipodystrophy include the use of metreleptin (with diet) as a first-line treatment for metabolic and endocrine abnormalities.16 In the EU, metreleptin is also indicated for partial lipodystrophy in adults and children ≥12 years of age, for whom standard treatments have failed to achieve adequate metabolic control.28 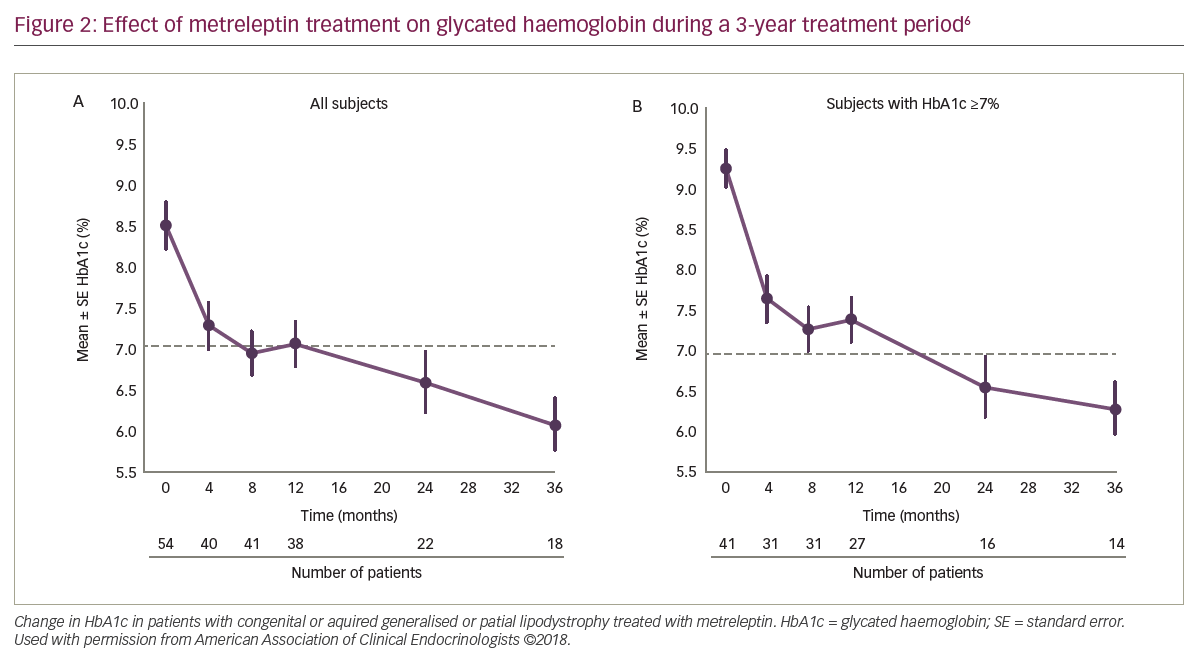 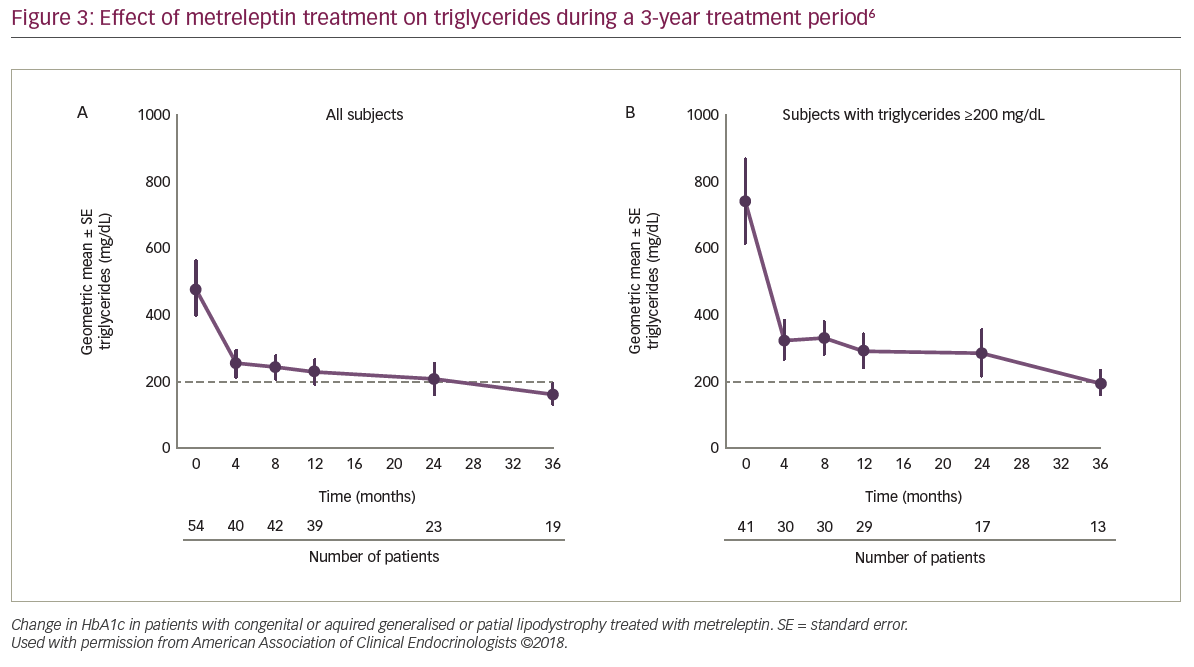 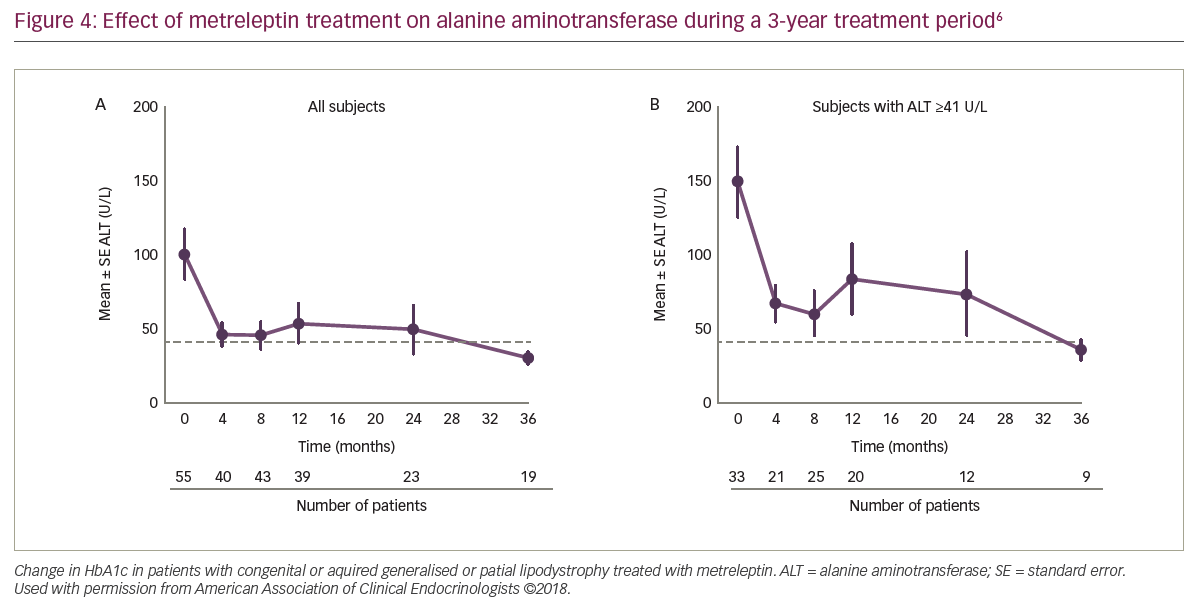 This article reports on the proceedings of a sponsored satellite symposium and, as such, has not undergone the journal’s standard peer-review process. However, it was reviewed by the Editorial Board for accuracy prior to publication.

All procedures were followed in accordance with the responsible committee on human experimentation and with the Helsinki Declaration of 1975 and subsequent revisions. Informed consent was received from the patient involved in this case study.

The named authors meet the criteria of the International Committee of Medical Journal Editors for authorship for this manuscript, take responsibility for the integrity of the work and have given final approval for the version to be published.

This project was initiated, funded, and developed by Aegerion. Content is only intended for healthcare professionals outside the USA. Content was developed by Dr Vanessa Lane (touchEndocrinology; www.touchendocrinology.com) based upon the Aegerion sponsored satellite symposium, “Behind insulin resistance: debugging the endocrine system. How to tackle leptin deficiency in lipodystrophies”, at EASD 2018. Content was approved by Dr Julia von Schnurbein and Prof. Elif Oral.

Adverse reactions should be reported to Aegerion by email to:
Medinfo.emea@aegerion.com or by telephoning the free phone number: 00800 234 37466

Wounds on the feet, known as diabetic foot ulcers (DFUs), are a major complication of diabetes. DFUs can become infected, leading to amputation of the foot or lower limb. Patients who undergo amputation experience significantly reduced survival rates.1 In previous studies, researchers have achieved high accuracy in the recognition of DFUs using machine learning algorithms.2–5 […]