The kidney is important in the context of diabetes not only because it is involved in normal glucose homeostasis, but also because it is one of the most important end organs to be involved in diabetes complications. Glomeruli are the meeting point of both microvascular, or renal; and macrovascular, or cardiovascular, health in diabetes. Sulfonylureas are effective glucose-lowering drugs. While a sulfonylurea-based glucose-lowering strategy is nephro-safe and nephro-protective, this aspect of sulfonylurea pharmaco-biology has not been highlighted earlier. In this review, we discuss current preclinical and clinical trial evidence regarding the performance of modern sulfonylureas at the glomerular battlefield.

The glomeruli (also known as Malpighian bodies) were first described four and a half centuries ago, in 1666. Marcello Malpighi showed that these structures were a continuation of the renal vasculature. Two centuries later, in 1842, William Bowman detailed their architecture and demonstrated the continuity between the capsule and the proximal tubule.

The glomeruli are vascular structures comprising a tuft of capillaries located at the start of each nephron. The 0.8–1.5 million glomeruli of each kidney receive their blood supply from afferent arterioles, and exit into high-resistance efferent arterioles. The pressure gradient creates a hydrostatic force which facilitates ultrafiltration and allows excretion of waste products. The glomerular filtration rate is a measure of renal function.1,2

The glomeruli are also the site of intense endocrine activity. The afferent arteriole walls synthesise renin, and juxtaglomerular cells play host to the renin-angiotensin system (RAS). These help regulate blood volume and blood pressure by multiple and complex mechanisms. The glomeruli produce multiple hormones related to the RAS, and are their target as well.1,2

Maintenance and improvement of glomerular health is an important strategy, as well as target, in metabolic and diabetes care. This is achieved by using various nonpharmacological and pharmacological tools. Advances in drug development have meant that the glomerular battlefield now plays host to multiple pharmaceutical warriors. Their usage is backed not only by pathophysiological justification, but also by robust evidence derived from randomised clinical trials and cardiovascular outcomes trials.4

Modern blood-pressure-lowering drugs, such as angiotensin converting enzyme inhibitors (ACEi), and angiotensin receptor blockers (ARBs), as well as glucose-lowering drugs, including glucagon-like peptide 1 receptor agonists (GLP1RA) and sodium glucose co-transporter 2 inhibitors (SGLT2i) have been demonstrated to attenuate albuminuria.5 This pharmaco-physiological effect is postulated to contribute to their cardiovascular benefit.

The antioxidant and positive haemorrheological effects of gliclazide have been studied by researchers in great detail. Recently, gliclazide was compared with glibenclamide in a murine model of streptozotocin-induced diabetes, fed a 4% cholesterol diet. The induction of high-cholesterol diet led to an increase in renal nicotinamide adenine dinucleotide phosphate [NAD (P) H] oxidase, reduction in manganese super oxide dismutase (MnSOD) and a rise in urinary lipid peroxidation products and H2O2 excretion. Gliclazide, but not glibenclamide, was able to reverse these abnormalities, and enhance endothelial nitric oxide synthase (e NOS) expression.8

Gliclazide also ameliorated glomerular macrophage migration, mesangial matrix expansion and albuminuria in the murine model. This beneficial effect is thought to be due to multiple causes, which seem to be drug-specific rather than class-specific (see Table 1).

The importance of the glomerular battlefield is underscored by the fact that most cardiovascular benefit noted in long-term and cardiovascular outcome trials is reported to be due to renal or microvascular risk reduction, as opposed to macrovascular risk attenuation. This is true for the United Kingdom Prospective Diabetes Study (UKPDS), the UKPDS follow-up at 10 years,9 the Action in Diabetes and Vascular Disease: Preterax and Diamicron Modified Release Controlled Evaluation (ADVANCE) trial,10 the ADVANCE observational study (ADVANCE ON)11 and the STENO-2 trial (NCT00320008).4 It must be noted that UKPDS, ADVANCE and STENO 2 all used sulfonylureas as a routine glucose-lowering therapy, with the latter two studies using gliclazide as the sulfonylurea of choice.

The long-term follow-up studies demonstrate that an initial phase of intensive control protects against long-term development of end-stage renal disease in persons with type 2 diabetes.12,13 Early institution of optimal glycaemic control, while renal function is still preserved, has the best results. Thus, the glomerular battlefield is one which should be targeted early on in the course of the war against diabetes. While the choice of glucose-lowering therapy is decided by multiple factors, the results of ADVANCE and ADVANCE ON, as well as STENO 2, suggest that the modern sulfonylurea – gliclazide – is an effective warrior in the fight for glomerular and renal health.

In the ADVANCE trial, intensive glucose lowering by the use of gliclazide modified-release (MR) based treatment resulted in significant relative risk reduction of 10% for the combined outcome of major macrovascular and microvascular events and 21% for a hard renal endpoint i.e. new or worsening nephropathy. Moreover, ADVANCE-ON, the observational follow-up trial of ADVANCE, has reported the legacy benefits with gliclazide MR and revealed that intensive glucose control was associated with a long-term reduction in end-stage renal disease (ESRD). During this follow-up trial for 9.9 years, a persisted, significant risk reduction for ESRD was observed with intensive glucose control (hazard ratio [HR] 0.54 [95% confidence interval [CI] 0.34, 0.85], p<0.01). The trial also established that patients with preserved kidney function benefit most with the ADVANCE treatment regimen, while those with diabetic kidney disease stages 1–5 benefit in a decreasing order. 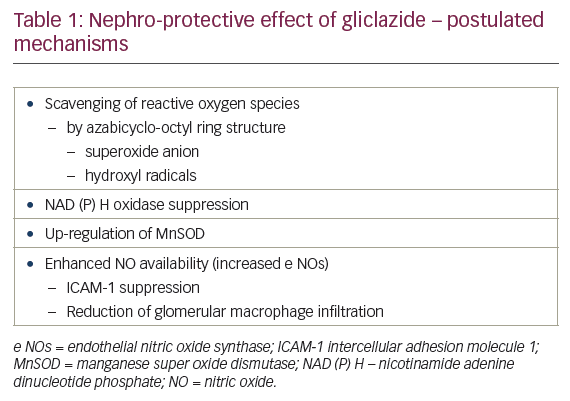 Various studies have demonstrated the free-radical scavenging or antioxidative effect of gliclazide in persons with type 2 diabetes. In a study conducted on 50 Indian participants with type 2 diabetes, Chugh et al. found significantly raised levels of malonyldialdehyde (MDA) and superoxide dismutase (SOD), and decreased levels of reduced glutathione (GSH) in uncontrolled diabetes. This was thought to indicate free radical stress-induced lipid peroxidation. A significant fall of MDA and SOD and increased levels of GSH in blood occurred after control with either gliclazide or glibenclamide, suggests beneficial effects of glycaemic control on oxidative stress. On intergroup comparison, gliclazide-treated participants showed greater improvement in oxidative stress (MDA, GSH) (p<0.001) than those on glibenclamide. The levels did not achieve normalcy in either group, however.14

Jennings et al. performed a blinded clinical trial in 30 participants with type 2 diabetes, on treatment for ≥2 years (mean 8 years), including glibenclamide for >2 years, with or without adjunctive metformin therapy. Patients were studied for 6 months and randomised to continue either their present dose of glibenclamide or to be converted to an equipotent dose of gliclazide. At 3 months, there was significant improvement in the oxidative status of the gliclazide-treated patients. Lipid peroxides decreased (8.3 ± 1.1 to 7.0 ± 0.06 μmol/L, p<0.01) and red blood cell SOD increased (135 ± 21 to 152 ± 36 μg/mL, p<0.05). Plasma albumin-thiols (PSH) levels were unaltered at 458 ± 38 μmol/L, whereas they had decreased significantly in the glibenclamide patients (414 ± 34 μmol/L, p<0.05), (p<0.004). Platelet reactivity to collagen also improved in the gliclazide-treated patients, decreasing from 65.1% ± 14% to 50.8% ± 24% (p<0.01), while it did not change in the glibenclamide cohort. Differences persisted at 6 months. Hence, gliclazide demonstrated free radical scavenging activity independent of glycaemic control.15

Thus, modern sulfonylureas may have a nephro-protective effect in specific subsets of persons with type 2 diabetes. The statistically significant nephro-protective results obtained with gliclazide may be explained by its antioxidant effects, which may be more relevant in persons with relatively better glycaemic control (HbA1c <7%), less genetic or structural causes predisposing to kidney disease (the elderly), and preserved renal function (CKD stage 1–3).16

Renal safety is an important concern while prescribing glucose-lowering therapy. Modern sulfonuylureas have been shown to be safe in chronic kidney disease.17 According to the South Asian Federation of Endocrine Societies (SAFES) consensus on safe and smart use of sulfonylureas, gliclazide and gliclazide MR can be used without dose modification in CKD stages 4 and 5.6 Glimepiride can be used in low once-daily doses. American guidelines from nephrology and diabetology organisations suggest that modern sulfonylureas can be used in conservative doses.17,18

Sulfonylureas are effective glucose-lowering drugs. Apart from their efficacy in achieving glycaemia, they are also proven to be reno-safe, and are helpful in improving renal health. The positive microvascular legacy effect noted with gliclazide MR provides evidence that this molecule is a useful warrior on the glomerular battlefield.

Sanjay Kalra, Deepak Khandelwal,
Sarita Bajaj and Ashok Kumar Das have nothing
to declare in relation to this article.

This article is a short opinion piece
and has not been submitted to external peer reviewers.

This article is published under the
Creative Commons Attribution Noncommercial
License, which permits any non-commercial
use, distribution, adaptation and reproduction
provided the original author(s) and source are
given appropriate credit. © The Authors 2018.