Thyroid hormones are essential in the regulation of early development and play a key role in the maintenance of a normal pregnancy and in the development of the foetus, particularly the foetal brain. An awareness of the gestational changes to thyroid physiology and the impact of thyroid disease on pregnancy and newborns is crucial for the successful management of hypothyroidism and hyperthyroidism. Increased levels of human chorionic gonadotropin (hCG) in the first trimester of pregnancy directly stimulate the thyroid gland to increase production of thyroid hormone, which results in decreased secretion of thyroid stimulating hormone (TSH).1 In normal gestation, the thyroid gland adapts its structure and function to meet these changing demands; however, decreased thyroid reserve can lead to the development of thyroid disease.2 Thyroid disease is a common occurrence during pregnancy, and may be associated with obstetric, labour, and delivery complications.3 Severe maternal hypothyroidism has been associated with cognitive delay in early childhood.4 Even if there is no detectable thyroid dysfunction, the presence of maternal antithyroperoxidase antibodies (TPOAb) increases the risk of miscarriage and preterm delivery.5 Since it has been estimated that around 1 in 6 pregnant women in an iodine-sufficient population are affected by thyroid disease,6 this is a substantial health problem.

The American Thyroid Association (ATA) has published new guidelines that cover most aspect of thyroid function and dysfunction during pregnancy and the postpartum period.8 The guidelines comprise 97 recommendations encompassing best practices for thyroid function testing, iodine nutrition, pregnancy complications, and treatment of thyroid disease during pregnancy, as well as diagnosis and management of hypothyroidism, thyrotoxicosis, thyroid nodules, and thyroid cancer, directions for future research. New recommendations include thyroid disease during lactation, thyroid dysfunction in women with infertility, and foetal and neonatal consequences of maternal thyroid disease.

Hyperthyroidism in women of childbearing age is predominantly of autoimmune origin and caused by Graves’ disease.9 While not treating overt hyperthyroidism can be risky for both mother and foetus, the use of the anti-thyroid drugs methimazole (MMI) or propyl thiouracil (PTU) in the first trimester, which is the period of organ development, also poses risks. In addition, as a result of the changes in thyroid physiology, thyroid-function tests should be interpreted differently in pregnant women than non-pregnant women. The definition of the upper limit of normal for TSH has been particularly controversial. There is a downward shift of the TSH reference range during pregnancy, with a reduction in both the lower (decreased by about 0.1-0.2 mU/L) and the upper limit of maternal TSH (decreased by about 0.5-1.0 mU/L), relative to the typical non-pregnant TSH reference range This decrease is largest in the first trimester and gradually rises, but even in the third trimester remains lower than for non-pregnant women. The decrease is also larger in twin pregnancies, and varies between different racial and ethnic groups.8

These guidelines were produced by an international panel of experts and should serve as the gold standard for diagnosis and management of thyroid disorders in pregnancy. However, the task forced members acknowledged that there was a lack of high-quality placebo-controlled trials investigating thyroid conditions during pregnancy, which decreased the strength of many recommendations. In particular the panel highlighted the need for clinical studies investigating the effect of iodine supplementation in pregnant women with the mildest form of iodine deficiency (median urinary iodine concentrations, 100 to 150 μg/L), as well as an evaluation of the effect of levothyroxine treatment (at 4 to 8 weeks of pregnancy) in women with either subclinical hypothyroidism or isolated hypothyroxinemia on the offspring’s IQ.8

The guidelines recommend targeted TSH testing only for high-risk groups, a decision that remains controversial, with many experts advocating universal screening.10 However, a large study found that antenatal screening (at a median gestational age of 12 weeks 3 days) and maternal treatment for hypothyroidism did not result in improved cognitive function in children at 3 years of age.11 Other gaps in our knowledge have been highlighted, including the need for antithyroid antibody testing for women with a history of preterm birth. At present, there is insufficient data to support the use of levothyroxine treatment for women who have antibodies but have normal TSH levels.12

In conclusion, these guidelines have translated the best available evidence into clear clinical recommendations, which will help define the best practices for thyroid disease in pregnancy and will improve the health of many mothers and newborns. 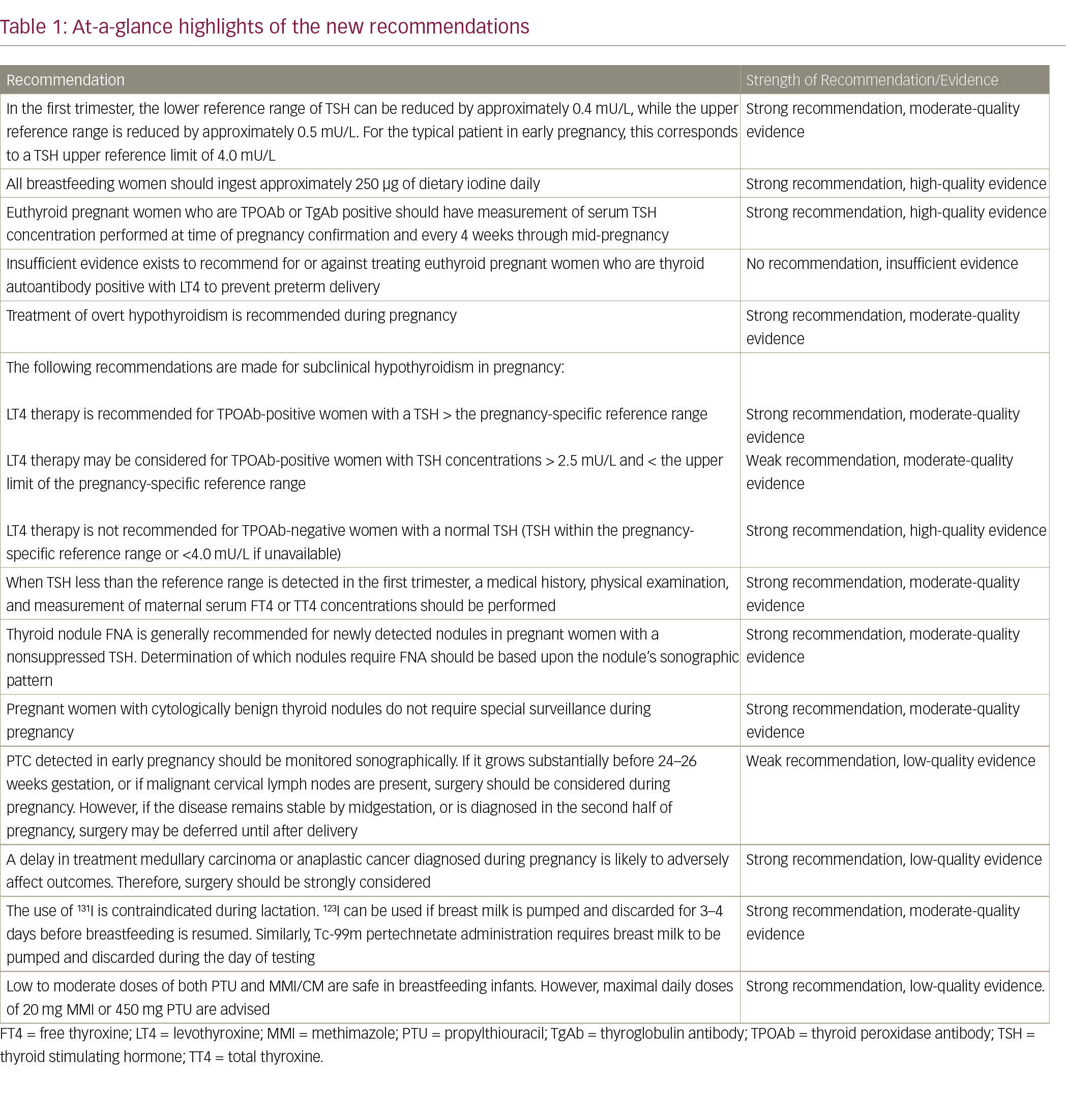