Cerebral oedema is the most common neurological complication of diabetic ketoacidosis (DKA). However, ischaemic and haemorrhagic brain injury has been reported infrequently. A 10-year old girl who was previously well presented with severe DKA. She was tachycardic with poor peripheral perfusion but normotensive. However, two fast boluses totalling 40 ml/kg normal saline were given. She was transferred to another hospital where she was intubated due to drowsiness. Rehydration fluid (maintenance and 48-hour correction for 7.5% dehydration) was started followed by insulin infusion. She was extubated within 24 hours of admission. Her ketosis resolved soon after and subcutaneous insulin was started. However, about 48 hours after admission, her Glasgow Coma Scale score dropped to 11/15 (E4M5V2) with expressive aphasia and upper motor neuron signs. One dose of mannitol was given. Her symptoms improved gradually and at 26-month follow-up she had a near-complete recovery with only minimal left lower limb weakness. Serial magnetic resonance imaging brain scans showed vascular ischaemic injury at the frontal-parietal watershed regions with haemorrhagic transformation. This case reiterates the importance of monitoring the neurological status of patient’s with DKA closely for possible neurological complications including an ischaemic and haemorrhagic stroke.

The authors would like to thank the late Prof Dr Fatimah Harun for her contributions in critically revising the manuscript. Last but not least, to their patient and their family who have kindly given the permission for us to report this case. Compliance with Ethics: All procedures were followed in accordance with the responsible committee on human experimentation and with the Helsinki Declaration of 1975 and subsequent revisions, and that informed consent was received from the parents and patient involved in the study. The case report has obtained the approval from the IRB of University Malaya Medical Center.

All named authors meet the International Committee of Medical Journal Editors (ICMJE) criteria for authorship of this manuscript, take responsibility for the integrity of the work as a whole, and have given final approval to the version to be published.

This article is published under the Creative Commons Attribution Noncommercial License, which permits any non-commercial use, distribution, adaptation and reproduction provided the original author(s) and source are given appropriate credit. © The Authors 2018.

Type 1 diabetes mellitus (T1DM) is the most common type of diabetes affecting children.1–3 Despite increasing awareness of early presentation of diabetes, a high number of children newly diagnosed with T1DM still present with diabetic ketoacidosis (DKA).4–7 DKA in children carries higher risk of mortality and morbidity compared to adults.8

Cerebral oedema is the most common cause of acute neurological deterioration, which occurs in 3–10 paediatric patients per 1000 cases of DKA.9,10 Ischaemic and haemorrhagic brain injury, although recognised, is uncommon among paediatric reports, with only 10% of the intracerebral complications post-DKA attributable to ischaemic or haemorrhagic brain infarction.11,12 To our knowledge to date, only 14 patients with haemorrhagic stroke post-DKA were reported.8,12–16

We present the case of a patient newly diagnosed with T1DM with severe DKA who developed an ischaemic haemorrhagic stroke and reiterate the importance of correct management.

A 10-year-old girl presented with polyuria, polydipsia and lethargy for 2 weeks and vomiting for 2 days. There was no significant past medical history. Family history revealed a history of hypothyroidism in the mother who was diagnosed in her 20’s. She was tachycardic with poor peripheral perfusion, but normotensive (blood pressure 117/68 mmHg). Glucometer reading was ‘HI’, which corresponds to glucose level of more than 29 mmol/L, with venous blood pH 7.011 and bicarbonate 6.4 mmol/L. Urinalysis revealed marked ketonuria. Two fast boluses of 20 ml/kg (total 40 ml/kg) normal saline were given each over 20 minutes. She was immediately transferred to another hospital and upon arrival became drowsier, and restless with reduced Glasgow Coma Score (GCS) and hence was intubated. At the second hospital, her fluids and glucose values were corrected gradually with fluid maintenance (0.9% normal saline) and correction based on 7.5% dehydration (minus boluses, given over 48-hour duration). There were no electrolyte abnormalities and potassium supplements were added into the intravenous maintenance fluid to avoid hypokalaemia. Insulin infusion at 0.1 unit/kg/hour was commenced right after the start of fluid maintenance and the intravenous fluids were discontinued 48 hours after admission.

The patient was extubated within 24 hours of admission. Her ketosis and acidosis resolved before conversion to basal bolus subcutaneous insulin at approximately 48 hours of her initial presentation. However, about 48 hours after admission, she had reduced GCS 11/15 (E4M5V2) with an expressive aphasia. All four limbs showed upper motor neuron signs with quadriparesis affecting the lower limbs (Medical Research Council (MRC) power 2/5 bilaterally) more than upper limbs (MRC power of 3/5 bilaterally). Initial computed tomography (CT) brain scan did not show cerebral oedema. In view of the deteriorating GCS, a trial of intravenous mannitol was given but no significant improvement was seen. 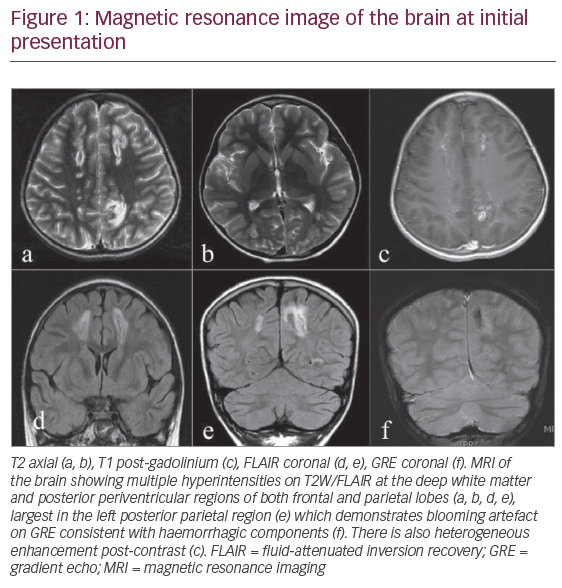 She was transferred to our facility which offers both paediatric endocrinology and paediatric neurology input for further management. Magnetic Resonance Imaging (MRI) of the brain (3T SIGNA™, GE Healthcare, Milwaukee, WI, US) at initial presentation showed multiple heterogeneously enhancing hyperintensities on T2-Weighted/Fluid-attenuated inversion recovery at the posterior periventricular and deep white matter regions of both frontal and parietal lobes consistent with ischaemic haemorrhagic infarction of the deep white matter in the vascular watershed regions (Figure 1). Magnetic Resonance Angiography (MRA) of the intracranial vessels was unremarkable. Her HbA1C at presentation was 11.5% with low c-peptide at one month follow up. Baseline thyroid function, autoimmune, metabolic and thrombophilia screen were all normal. Echocardiogram showed no vegetation or valvular lesions. She was discharged with some residual limb weakness after two weeks of hospitalisation.

The mechanism of cerebral haemorrhage is unclear and could be secondary to a combination of intracranial hypertension and systemic hypotension resulting in cerebral infarction usually at the watershed arterial territories. Diabetic ketoacidosis is also pro-inflammatory causing vascular endothelial perturbation and dysfunction of the coagulation system8 predisposing to a higher risk of thrombus and haemorrhage.

Judicious initial fluid resuscitation and correction of dehydration are also important to ensure optimum DKA management. Too much and too rapid fluid administration may predispose a child to intracerebral complications whereas too little may prolong DKA resolution. Dunger et al. and the International Diabetes Federation (IDF)/International Society for Pediatric and Adolescent Diabetes (ISPAD) 2014 Guidelines outlined the initial fluid resuscitation in patient presenting with shock by giving bolus of 10–20 ml/kg of normal saline over 1 to 2 hours. A repeat bolus is indicated only if the circulation is not restored but should not exceed 30 ml/kg.21,22 However, there are controversies regarding the association between the rate of fluid or sodium administration used in the DKA treatment and the development of cerebral oedema23,24 and other intracerebral complications. The recently completed Pediatric Emergency Care Applied Research Network (PECARN) Fluid Therapies Under Investigation in DKA (FLUID) study is the first prospective randomised trial that evaluated the fluid regimens for DKA in children. This multicentre study, which consisted of four treatment arms, evaluated the effects of rehydration rate and fluid sodium content on neurological status during DKA treatment, the frequency of clinically overt cerebral oedema and long-term neurocognitive outcomes.23

Apart from fluid management, guidelines have also outlined recommendations on insulin therapy as well as electrolyte management to ensure optimum treatment of DKA and reduce the risk of complications. Insulin therapy in DKA should begin with a rate of 0.05–0.1 unit/kg/hour about 1–2 hours after starting fluid replacement therapy.21,25 Hypokalaemia is common in DKA, necessitating potassium replacement irrespective of the serum potassium level unless renal failure is present. 21,25 As for now, the guidelines for patients with DKA and stroke are lacking, including the best rehydration rate, parameters for the use of thrombolytics and other medications and monitoring schedule.26 Thrombolysis for the treatment of paediatric stroke remains controversial, although isolated paediatric cases have reported successful outcomes when administered intravenous tissue plasminogen activator for acute treatment of ischaemic stroke.27 Similarly, there is also no clear guideline on the management of children with haemorrhagic stroke. Guidelines for adults recommend cautious reduction of extremely high blood pressures. Recombinant factor VIIa has shown some benefit in decreasing recurrence but only within clinical trials. These guidelines however refer to different aetiologies of haemorrhage rather than those seen in children or patients with DKA. Surgical decompression may be warranted in large haemorrhages compressing the neurovascular structures.8

In conclusion, our case reiterates the importance of clinicians to be vigilant of cerebral complications including ischaemic haemorrhagic stroke in patients with DKA. We suggest that in severe DKA, close neurological monitoring should be performed for at least 48 hours and prompt brain neuroimaging (MRI) requested in any child with neurological impairment (but normal CT brain) to rule out acute stroke.