Necrotizing fasciitis is one of the best-known soft tissue infections. Fournier’s gangrene is a type of necrotizing fasciitis of the genital, perianal, and perineal regions caused by the infection of multiple anerobic/aerobic microorganisms. We present the case of a 47-year-old man with a history of uncontrolled type 2 diabetes who presented to the emergency room with intense abdominal pain and signs of severe sepsis. A prompt diagnosis of a necrotizing fasciitis of the perineum (Fournier’s gangrene) was made and immediately broad-spectrum antibiotics, intravenous fluids, and surgical debridement were administered. The patient had an impressive response to treatment with resolution sepsis and was discharged 4 weeks after a skin graft of the abdominal and perineal areas. Fournier’s gangrene remains a life-threatening and many times fulminant disease in which a high grade of suspicion is needed for its diagnosis and rapid and assertive treatment for its survival.

Necrotizing fasciitis is a soft tissue infections in addition to cellulitis and myositis, which is classified as being either type 1 or type 2.1 In type 1 necrotizing fasciitis, the infection is caused by multiple microorganisms that involve at least one anaerobic species (e.g. Peptostreptococcous, Clostridium, or Bacteroides) in combination with one or more members of Enterobacteriaceae and one or more facultative anaerobic Streptococci.1,2 Classically, these types of infections are characterized by fulminant tissue destruction, with sepsis, consequent toxic systemic signs, and a high mortality rate (20–40 %).3,4

Fournier’s gangrene is a type of necrotizing fasciitis (usually type 1) of the genital, perianal, and perineal regions than can rapidly extent to the lower extremities or abdomen.3–4 The most commonly reported etiology is an anal/perineal abscess in patients with underlying uncontrolled diabetes, but has also been described to be secondary to thrombosed hemorrhoids or strangulated inguinal hernia.3–5 Many of the cases remain of unknown etiology and the postoperative period has been described as one of the most common settings of its presentation in patients with diabetes.3–5 It represents a diagnostic challenge and given the usually high mortality associated with this condition, a prompt diagnosis, and an aggressive broad-spectrum antibiotic regimen and surgical treatment are mandatory. Herein we present the case of an extensive Fournier’s gangrene in a patient with type 2 diabetes.

Case Presentation
A 47-year-old man with a history of uncontrolled type 2 diabetes, hypertension, and coronary artery disease presented to the emergency department with malaise, myalgia, fever, and an intense abdominal pain (9/10). On physical examination, heart rate was 115 beats per minute, blood pressure 95/50, respiratory rate 21 per minute, and temperature 39.1ºC. Lower abdomen was swollen, erythematous, and tender. On the perineum there was a 2 x 2 cm necrotic patch surrounded by violaceous tissue (probably due to a furuncle). There was no subjacent gastrointestinal or urological pathology. Plasma glucose was 375 mg/dl with normal blood gases and negative serum and urine ketones. The Laboratory Risk Indicator for Necrotizing Fasciitis (LRINEC) score was 7; high suspicion for necrotizing fasciitis (C-reactive protein >150 mg/L, white blood cell count 20 per mm3, hemoglobin 12.5 g/dL, sodium 136 mEq/L, creatinine 1.4 mg/dL, and glucose >180 mg/dL). A diagnosis of a necrotizing fasciitis of the perineum (Fournier’s gangrene) with severe sepsis was made. Management with intravenous (IV) fluids, aerobic/anaerobic broad-spectrum antibiotics (imipenem/cilastin 500 mg IV every 6 hours and vancomycin 1g IV every 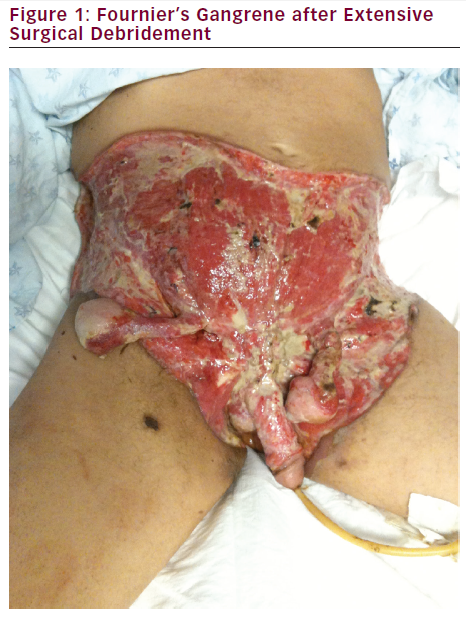 12 hours), and IV insulin infusion were immediately started as the patient was transferred to surgery. An aggressive debridement of all necrotic areas down to viable tissue was made without complications (see Figure 1).

Cultures were positive for aerobic and anaerobic bacteria (Bacteroides, facultative anaerobic streptococci, and Enterobacter). After surgery, the patient was transferred to the intensive care unit for medical support; there was no need of inotropic support. He had an impressive response with resolution of infection and was discharged 4 weeks after a skin graft (realized 1 month after the initial debridement surgery) of the abdominal and perineal areas.

Discussion
Fournier’s gangrene pathophysiology usually begins with microthrombosis of the small subcutaneous vessels that leads to gangrene of the skin, and subsequent rapid spread of bacteria along the muscular fascia taking advantage of the relatively poor blood supply.3 Intense pain with systemic inflammatory response syndrome, severe sepsis, and dramatic skin changes that involve necrosis, red/purple patches, erythema, crepitation, and swelling are the main clinical characteristics. Immediate diagnosis and management are critical in the prognosis.3,4 As seen in this case, high rate of IV fluids along with hemodynamic stabilization and broad-spectrum antibiotics (with aerobic and anaerobic coverage) are imperative, but urgent surgery with debridement of all necrotic/nonviable tissue is crucial and, if delayed, could be catastrophic.6,7 Antifungal therapy is not mandatory or needed in all cases. After surgery using vacuum dressing when possible is ideal to avoid further infection. Hyperbaric oxygen has also been described as part of the treatment even though evidence until now is inconclusive.8 Mortality ranges between 25–40 % and it is directly proportional to the delay in the time of diagnosis and treatment.9

Conclusion
Fournier’s gangrene is a type of necrotizing fasciitis of the genital, perianal, and perineal regions that remains a diagnostic challenge and requires an urgent diagnosis and aggressive medical and surgical treatment, both which are associated with a the prognosis of an illness that has been historically associated to a high mortality.

René Rodríguez-Gutiérrez, MD, Gloria Gonzalez-Saldivar, MD, José Gerardo Gonzalez-Gonzalez, MD, PhD, and Margo S Hudson, MD, have no conflicts of interest to
declare. No funding was received for the publication of this article.

This article is published under the Creative Commons Attribution Noncommercial License, which permits any noncommercial use, distribution, adaptation, and
reproduction provided the original author(s) and source are given appropriate credit.
Compliance with Ethics: Written informed consent was obtained from the patient for publication of this case report and the accompanying images. A copy of the written consent is available upon request for review by the editor of this journal.