Gestational diabetes mellitus (GDM) is a heterogeneous condition, as exemplified by our inability to agree upon screening and diagnostic criteria. Not all women with GDM carry the same long-term risk of diabetes. We therefore propose a triage system to identify women with GDM who are at higher risk of converting to diabetes mellitus, in a shorter time frame after pregnancy. Such women can be offered personalized risk assessment information.

Women with gestational diabetes mellitus (GDM) carry a multidimensional and trans-generational impact.1 It poses a huge medical and public health burden on society today, which can be mitigated if appropriate proactive and preventive strategies are put in place. These include early screening and identification of women with GDM, provision of appropriate non-pharmacological and pharmacological therapy, and regular follow up after delivery to detect and treat diabetes in a timely manner. GDM is similar to pre-diabetes in many ways.2,3 Though it differs because of its association with pregnancy, the pathophysiologic features are the same as those operating in impaired glucose tolerance. Studies have reported that women with GDM are several times more likely to develop subsequent type 2 diabetes mellitus (T2DM) compared to women without GDM, with approximately 50% developing diabetes within 10 years.4 Asian Indians stand at higher risk for earlier conversion to diabetes, compared to Caucasians. Studies from India have found high conversion rates to T2DM even within five years of delivery.5–8

This reality has made GDM screening, diagnosis, management, and postpartum follow-up an international public health priority.

Triage system
GDM is a heterogeneous condition, as exemplified by our inability to agree upon screening and diagnostic criteria.3 Not all women with GDM carry the same long term risk of diabetes. We therefore propose a triage system to identify women with GDM who are at higher risk of converting to diabetes mellitus, in a shorter time frame after pregnancy. Such women can be offered personalized risk assessment information.9 Women at higher risk should be encouraged to breastfeed their infants,10 called for relatively frequent follow-up, supported with intensive lifestyle modification advice, and prescribed preventive pharmacotherapy. The health care system can use its limited resources to focus on these high risk women, and achieve greater public health benefits with a targeted approach. 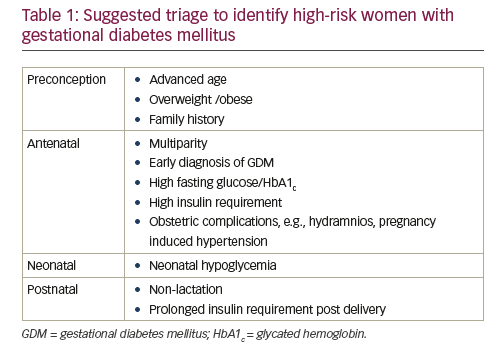 were associated with future diabetes.11 Prepregnancy obesity, excessive weight gain from prepregnancy to postpartum, and weight gain after pregnancy are associated with increased risk of T2DM after GDM.12,13 Lie et al. evaluated the effects of prepregnancy BMI and weight change from prepregnancy to postpartum on postpartum T2DM risk among Chinese women with GDM. The multivariable-adjusted hazard ratios based on different levels of prepregnancy BMI (<23, 23–24.9, 25–29.9, and ≥30 kg/m2) were 1.00, 1.77, 2.35, and 6.54 (p<0.001) for incident T2DM. Compared with women with stable weight (±3 kg), those with weight gain ≥7 kg had an 86% increased risk of diabetes.12 Moon et al. evaluated the effect of weight gain on the development of T2DM after GDM in Asian women who have a relatively low BMI. A total of 418 women with previous GDM or gestational impaired glucose tolerance were recruited and underwent an oral glucose tolerance test at six weeks postpartum and annually thereafter. They observed an increased risk of incident diabetes as the tertile of BMI change increased (8.6%, 12.6%, and 16.9%, p=0.039).13 Breastfeeding has long-term protective effect of lactation on the development of T2DM in women with gestational diabetes mellitus.14

The HHEX encodes a transcription factor that is involved in ventral pancreas development. The CDKN2A and CDKN2B genes encode p16INK4a and p15INK4b, respectively, both of which regulate β-cell replication. The data imply that the decreased β-cell function in early converters might be due to genetic predisposition conferred by these variants in HHEX, at least in part. The variant that was significantly associated with late conversion to T2DM was located in CDKAL1. The CDKAL1 gene encodes cyclin-dependent kinase 5 regulatory subunit-associated protein 1-like 1. This variant is also well known for its association with T2DM and decreased insulin secretion. Additionally, a recent large-scale genome wide association (GWA) study showed that a variant in this gene is significantly associated with BMI in East Asians. It might be possible that the risk of T2DM in late converters conferred by this variant is modulated through an interaction with obesity.9

One may consider antenatal and postnatal triage to identify women with GDM who are at ‘higher risk’ of developing diabetes. Clinical pointers for high risk include non-white ethnicity, advanced age, overweight/obesity, family history of diabetes, diagnosis of GDM in early pregnancy, high insulin requirement during pregnancy, dyslipidemia, and history of obstetric complications such as hydramnios and pregnancy-induced hypertension (PIH). Delivery of a macrosomic baby (>3,500 g at term in South Asia), with associated neonatal hypoglycemia,17 and prolonged insulin requirement post delivery,) are also suggested as clinical means of triage. While genetic analysis and metabolomics may play an important role in triage at a later stage, its use as a tool for triage cannot be supported on the basis of current evidence.18

Preventive pharmacotherapy
The American Association of Clinical Endocrinologists (AACE) recommends use of pharmacotherapy in selected persons with pre-diabetes.19 These include persons who are pre-diabetic and are overweight/obese, or have other features of metabolic syndrome. Such a strategy is encouraged as these persons are at high risk of converting to diabetes and developing complications in the future. A similar rationale can be applied to women with GDM. Women with GDM have a high risk of conversation to T2DM,20 and hence may benefit from preventive pharmacotherapy. In line with current guidelines, metformin seems the safest option for this.

It must be remembered, however, that metformin in an adjunct to, and not a substitute for, lifestyle modification. This information must be tempered by the understanding that it is extremely difficult for the young mother to find time for her own care. Usually, her medical and nutritional needs take a back seat to the demands of her child and family.21

The Troglitazone in Prevention of Diabetes (TRIPOD) was the first randomized controlled trial to examine the effectiveness of a pharmacotherapy intervention in delaying or preventing the development of T2DM among women with a history of GDM. Women at high risk for developing T2DM, based on 75 g oral glucose tolerance test (OGTT) postpartum, were recruited. After 28–30 months of follow-up, the authors found a significantly lower cumulative incidence of diabetes among women receiving troglitazone as compared with women who received placebo (5.4% versus 12.1%).22 The TRIPOD trial was discontinued in between, as the drug was withdrawn from the market due to reports of hepatotoxicity. In Diabetes Prevention Program (DPP) study, metformin also resulted in significant reduction of about 50% in incidence of T2DM as compared to placebo among women with GDM.23 However, adequate work has not been done to support universal use of preventive pharmacotherapy in this population. Doing so would increase the number of individuals receiving pharmacotherapy to unmanageable proportions. The health care system is not equipped to handle such a large burden of patients. Hence, the role of triage becomes even more important.

Postpartum screening
Clinical trials provide evidence that lifestyle modification as well as pharmacological intervention can prevent progression to T2DM in women with a history of GDM. There is also robust evidence that these interventions are as effective in GDM women as in people with prediabetes. Effective interventions, however, are possible only if high risk individuals are identified. This, in turn, needs rigorous postpartum follow- up. There has been debate on which test needs to be implemented for increasing postpartum screening rates. It should be kept in mind that the 75 g oral glucose tolerance test remains the gold standard. Fasting glucose estimation may miss 30–40% of cases of T2DM, and will not detect isolated impaired glucose tolerance. HbA1c as a screening test has not been adequately studied.24 In Asian populations, Fasting plasma glucose (FPG) and HbA1c concentrations have much lower sensitivity than postprandial glucose concentration for detection of diabetes. In the DECODA study (a study of 11 Asian cohorts), more than half of patients with diabetes had isolated postprandial hyperglycaemia.25 We feel that postpartum women with a history of GDM should be informed that OGTT is the most sensitive screening test. In cases of lack of acceptance or practical infeasibility of OGTT, FPG or HbA1c can be used for postpartum screening.26 Normoglycaemic women can undergo periodic screening annually whereas it may be appropriate to screen prediabetic women every six months, especially in high-risk ethnicities. However, the evidence on appropriate screening frequency is lacking. Certain populations like those with history of polycystic ovary syndrome (PCOS) and recurrent history of GDM are at high risk and should be followed closely.

Summary
Our aim is not to add controversy to the already confusing area of GDM screening and follow up. Rather, we hope to stimulate research to identify high risk women with GDM, and provide appropriate intervention to reduce their chances of converting to diabetes and developing complications. This proactive approach should create synergy of purpose amongst all health care providers involved in the care of GDM, and facilitate more efficient use of limited resources to achieve optimal public health outcomes.

Achini Wijesinghe, Sonali Gunatilake, Dina Shrestha, Yashdeep Gupta, Noel Somasundaram, Uditha Bulugahapitiya, and Sanjay Kalra have nothing to disclose in relation to this article. No funding was received for the publication of this article.
Compliance with Ethics:This article involves a review of the literature and did not involve any studies with human or animal subjects performed by any of the authors.
Authorship: All named authors meet the International Committee of Medical Journal Editors (ICMJE) criteria for authorship of this manuscript, take responsibility for the integrity of the work as a whole, and have given final approval to the version to be published.