Type 2 diabetes and obstructive sleep apnoea (OSA) are diseases with high prevalence and major public health impact. There is evidence that OSA is independently associated with alterations in glucose metabolism. Furthermore, OSA is a significant risk factor for the development of type 2 diabetes. Possible causes might be intermittent hypoxaemia and sleep fragmentation with increased oxidative stress and sympathetic activity, which are typical features of OSA. OSA might also be a reason for ineffective treatment of type 2 diabetes. There is further evidence that the treatment of OSA by continuous positive airway pressure (CPAP) therapy might improve glucose metabolism. On the other hand, there are also hints in the literature that type 2 diabetes might induce sleep apnoea, especially in patients with autonomic neuropathy, but that OSA also facilitates the development of neuropathy in terms of mutual interactions between OSA, type 2 diabetes and diabetic neuropathy. Based on the current scientific data, clinicians have to be aware of the relations between OSA and type 2 diabetes, both from the sleep medical and the diabetological point of view.

Acknowledgements:  Bogdan Tautz provided us with unpublished data concerning the prevalence of obstructive sleep apnoea in diabetic patients in his GP’s surgery.

Type 2 diabetes and obstructive sleep apnoea (OSA) are both highly prevalent conditions with a major impact on public health.1,2 Obesity is a common feature of both groups of patients. Thus, the metabolic syndrome, which is characterised by obesity, insulin resistance (IR), dyslipidaemia and hypertension, can often be found in both type 2 diabetes and OSA. In many cases the metabolic syndrome seems to be the most important underlying disease both of type 2 diabetes and OSA.3–5 But what is the impact of type 2 diabetes on OSA and vice versa? Is there only a coincidental or even a causal relationship between the two diseases? Has OSA treatment in terms of continuous positive airway pressure (CPAP) application had an impact on glucose metabolism?

Impact of Obstructive Sleep Apnoea on Type 2 Diabetes
Several studies support the hypothesis that habitual snoring and OSA have an impact on glucose metabolism in both patients with and without diabetes.3 Furthermore, OSA has been shown to be an independent risk factor for the occurrence of IR and type 2 diabetes.6–9 OSA is characterised by intermittent apnoeas and hypoxia during sleep with consecutive arousals and sleep fragmentation. Intermittent hypoxia and sleep fragmentation might lead to an increase in sympathetic activity and in chronic inflammation due to serological mediators such as interleukin 6 and 8, leptin and tumour necrosis factor (TNF)-alpha. Intermittent hypoxia per se is a risk factor for the development of type 2 diabetes10 One reason for this might be an increase of oxidative stress due to intermittent hypoxia. Increased sympathetic activity additionally leads to incretion of catecholamines and cortisol, which are both prodiabetogenic hormones. Thus, sleep apnoea might lead to a disturbance of glucose metabolism and to the development of type 2 diabetes and neuropathy.11

To look at some studies in detail: In a 10-year follow-up study in 69,852 nurses with an age between 40 and 65 years, regular snoring was independently associated with a twofold increased risk of developing diabetes.12 Also in hypertensive men OSA was – besides obesity – a risk factor for diabetes.13 In the study of Elmasry and co-workers the prevalence of OSA defined by an apnoea-hypopnoea-index (AHI) of at least 20 per hour was 36.0 % in the diabetic group versus 14.5 % in hypertensive men without diabetes. Individuals suffering from OSA in combination with a waist-to-hip-ratio of at least 1 had an odds ratio (OR) of 11.8 for development of type 2 diabetes. Our own populationbased study in Turkey, which included 1,946 individuals, investigated the possible association between OSA syndrome, the metabolic syndrome and IR. In this study, however, OSA syndrome was associated with the metabolic syndrome rather than with IR, which was estimated by homeostatic model assessment (HOMA).14 The reason for this opposite finding could be the very high percentage of the metabolic syndrome within the female population. In any case the prevalence of OSA is increased in type 2 diabetes and vice versa – depending on the definition of OSA and OSA syndrome the prevalence of diabetes in OSA patients seems to be in the range of 15 to 30 %.15,16 Preliminary data of our own working group also show a high prevalence of sleep disordered breathing in individuals with type 2 diabetes with nearly 50 % of patients showing a respiratory disturbance index (RDI) of at least five per hour and of 7.5 % with additional increased daytime sleepiness documented in an Epworth Sleepiness Scale (ESS) Score of more than 9.17 But this also means that although the prevalence of sleep disordered breathing in our study was highly increased in patients with diabetes only, rather few sleep apnoea patients suffered from severe daytime sleepiness. Similar results were published in the papers of Schober et al. and Keller et al.18,19 In these two papers, the authors detected no high but almost normal levels in the ESS score although the patients with diabetes had OSA. The reasons for these findings remain unclear. Either the impact of sleep apnoea on and/ or the perception of daytime sleepiness is reduced in individuals with diabetes with OSA in comparison with OSA patients without diabetes. Do diabetic OSA patients have fewer arousals due to sleep apnoea? Does autonomic neuropathy (AN) have an impact on the perception of daytime symptoms? Or: Are OSA symptoms simply superimposed by the symptoms of the diabetic disease itself? These are only some of the questions which have to be investigated in more detail in the future. Although at the least, the ESS does not seem to be a valuable tool with which to detect sleep apnoea in patients with diabetes. A recent study investigated another point, namely whether the severity of OSA is a predictor of glycaemic control in individuals with type 2 diabetes.20 In this study, 60 consecutive patients with diabetes were recruited from outpatient clinics and underwent full polysomnography. Furthermore, glycated haemoglobin (HbA1c) was taken as a parameter for glycaemic control. After controlling for age, sex, race, body mass index (BMI), number of diabetes medications, level of individual exercise, years of suffering from diabetes and total sleep time, there was significant impact of the severity of OSA on glucose control expressed in a higher HbA1c in patients with more severe sleep apnoea. 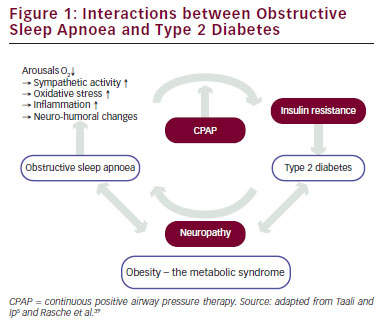 Impact of Obstructive Sleep Apnoea Treatment on Glucose Metabolism
Considering that OSA at least facilitates the development of type 2 diabetes, it would be possible that the treatment of OSA ameliorates glucose metabolism in OSA patients. The most effective treatment of OSA is CPAP ventilation.21 Hence, several studies have investigated the effect of CPAP on glucose metabolism both in individuals with and without diabetes. Most of the studies have shown that CPAP has an impact on diabetic metabolism in terms of better glucose control in both groups. One of the earliest studies was that of Brooks and colleagues, who investigated the insulin responsiveness before and during CPAP in 10 very obese OSA patients.22 In this study, CPAP improved the insulin responsiveness significantly within 4 months of treatment. In a similar study, Harsch and colleagues also reported an improvement of insulin sensitivity in obese patients with diabetes.23 But this effect could only be seen after 3 months of CPAP and not immediately, as in non-obese patients without diabetes.24 Obesity seems to be the most important cofactor that influences the CPAP effect on glucose metabolism. In a placebo-controlled CPAP intervention study in OSA patients without diabetes insulin sensitivity immediately was increased by CPAP , but the improvement only maintained after 12 weeks of treatment in those patients with only moderate obesity.25 In contrast to these findings, a randomised, double-blind, placebo-controlled study in the UK did not find any significant improvement of glycaemic control or IR in male patients with type 2 diabetes after a CPAP treatment period of 3 months.26 The limitation of this study, however, is that the daily average usage of CPAP was only about 3.5 hours, which would be regarded as a non-compliance of therapy in terms of international guidelines of sleep medicine.

But why do we also find an increased prevalence of AN in OSA patients? The reason might be that the pathophysiological sequelae of OSA, such as intermittent hypoxia with increased oxidative stress and chronic inflammation and additional microvascular damage, may also have a damaging effect on the nerve system and consequently lead to neuropathy, which again may have a rebound impact on ventilation.39 The existence of an obviously ‘vicious circle’ of the mutual interactions between diabetes and OSA was recently underlined by Tahrani and co-workers.40 In a group of 234 patients with type 2 diabetes randomly recruited from the diabetes clinic of two UK hospitals, the authors found a prevalence of diabetic neuropathy of 47 % and that of OSA of 65 %. Neuropathy prevalence was higher in patients with OSA than those without (60 versus 27 %; p<0.001), which was associated with an increased nitrosative/oxidative stress and an impaired microvascular regulation. Oxidative stress correlated with hypoxaemia severity in OSA. The most noteworthy finding was that OSA was independently associated with diabetic neuropathy (OR 2.82; 95 % confidence interval [CI] 1.44–5.52; p=0.0034). This means that OSA itself seems to have a profound impact on the nerve system and might promote the development of neuropathy. Conclusions
Between the two diseases – OSA and type 2 diabetes – there are mutual intercorrelative interactions, which are schematically shown in Figure 1. The base of these interactions is obesity and the metabolic syndrome, as both patient groups often suffer from these disorders. Particularly visceral adiposity seems to be an important confounding factor in the relationship between OSA and diabetes. OSA is independently associated with alterations in glucose metabolism and the metabolic syndrome. Due to intermittent hypoxia, sleep fragmentation and increased sympathetic activity pre-existing IR might increase. Thus, under certain conditions OSA seems to be a risk factor for the development and even for ineffective treatment of diabetes.

CPAP – at least in case of good adherence to therapy – significantly improves insulin sensitivity in OSA patients. In case of additional obesity the CPAP effect can be only seen after several months of treatment. But more RCTs with a larger number of patients and a longer treatment period are needed to answer the question, whether the positive effect of CPAP on glucose metabolism is constant during a longer time. Furthermore, the question whether an IR can be reversed or the progression into a definite type 2 diabetes might be prevented by CPAP therapy of OSA is not yet answered.

The prevalence of sleep disordered breathing is increased in patients with diabetes and AN. Most of the respiratory events are obstructive apnoeas. OSA patients with diabetes and diabetic neuropathy suffer from the most profound oxygen desaturations during sleep, the typical clinical symptoms of OSA do not differ between diabetes patients with and without neuropathy. Hence, to some degree, diabetic AN may contribute to the high prevalence of OSA in patients with diabetes in general. On the other hand, OSA itself seems to facilitate the development of neuropathy due to oxidative stress and microvascular damage. Hence, based on the current scientific data, clinicians have to be aware of the relations between OSA and diabetes, both from the sleep medical and the diabetological point of view. In OSA patients, special attention has to be paid to the presence of diabetes, and patients with poorly controlled diabetes have to be examined for the presence of OSA.

Wounds on the feet, known as diabetic foot ulcers (DFUs), are a major complication of diabetes. DFUs can become infected, leading to amputation of the foot or lower limb. Patients who undergo amputation experience significantly reduced survival rates.1 In previous studies, researchers have achieved high accuracy in the recognition of DFUs using machine learning algorithms.2–5 […]