Insulin autoimmune syndrome, or Hirata’s disease, is a rare cause of hypoglycaemia. It is characterised by spontaneous episodes of hypoglycaemia, without any exposure to exogenous insulin. The majority of cases are seen in the Japanese population, and it is rarely found to affect other ethnicities. The recognition of this disease is important to avoid unnecessary investigations and procedures. Here, we report two cases of insulin autoimmune syndrome, which were diagnosed and managed in our institute.

Insulin autoimmune syndrome (IAS) is a leading cause of hypoglycaemia in the Japanese population.1 In India, which has a population of more than 1 billion, only 28 cases of IAS have been reported to date, to the best of our knowledge.2–10 IAS is characterised by hyperinsulinaemic hypoglycaemia – elevated insulin autoantibody titres with no prior exposure to exogenous insulin. Most cases of IAS are self-limiting. Here, we report our experience with two cases of this rare disease.

A 48-year-old Indian man presented to our endocrine clinic with repeated episodes of severe hypoglycaemia for the past 4 months. These episodes occurred 3–4 hours after meals and were characterised by symptoms of increased hunger, dizziness, palpitations, tremors and diaphoresis. The symptoms were reversed by the patient eating a carbohydrate-based meal. The patient obtained a glucometer and his blood glucose readings during symptomatic episodes varied between 30 and 40 mg/dL. There was no history of fasting hypoglycaemia.

The patient was non-diabetic and had no history of exposure to insulin, insulin secretagogues or any drug known to precipitate hypoglycaemia. He was subjected to an extended oral glucose tolerance test, the results of which are summarised in Table 1. The test result revealed a plasma glucose of 33 mg/dL, with corresponding serum insulin of 5,609 µU/mL (normal range
-9.2–138.9 µU/mL) and serum C-peptide of 30.9 ng/mL (normal range 1.1–4.4 ng/mL), measured by electrochemiluminescence assay (Roche Diagnostics, Rotkreuz, Switzerland). The molar ratio of insulin to C-peptide was 3:8 (more than 1). The laboratory values raised a suspicion of IAS. To confirm the diagnosis, insulin antibody titres were measured by enzyme immunoassay; the level was more than 300 U/mL (normal range <12 U/mL). The analysis of other autoantibodies (antinuclear antibody, anti-double stranded DNA antibody, anti-neutrophilic cytoplasmic antibody, rheumatoid factor and anti-thyroid peroxidase) was negative. 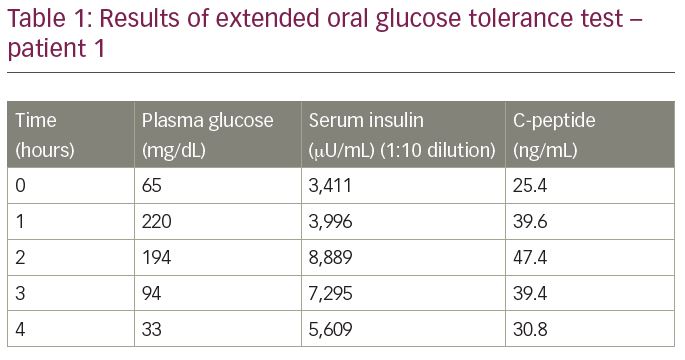 Other laboratory tests were within normal limits. These included: complete blood count, liver function tests, kidney function tests, thyroid profile, serum cortisol, hepatitis B surface antigen, anti-hepatitis C antibody and HIV antibody tests. Computed tomography (CT) of the patient’s abdomen was normal with no abnormality of the pancreas. A gallium 68 DOTANOC scan of the whole body did not reveal any suspicious lesions.

The patient was initiated on frequent low-carbohydrate meals. Subsequently, he had spontaneous resolution of hypoglycaemia after 6 months of initial presentation. At the end of 6 months, his insulin autoantibody titres were 1.2 U/mL.

A 50-year-old Indian man presented to our clinic with recurrent hypoglycaemia for the past month. These episodes were characterised by neuroglycopenic symptoms with documented glucose values on glucometer varying from 35 to 60 mg/dL. These symptoms were corrected by the intake of a carbohydrate-based diet, thus fulfilling Whipple’s triad. These episodes occurred 5–6 hours after meals. There was no history of exposure to insulin, oral hypoglycaemic agent or any drug known to precipitate hypoglycaemia. The patient was non-diabetic.

The patient was admitted for evaluation of hypoglycaemia. An extended oral glucose tolerance test revealed an end-of-test blood glucose of 50 mg/dL, with a corresponding insulin level of 6,154 µU/mL and a C-peptide of 19.6 ng/mL, measured by electrochemiluminescence assay (Table 2). Insulin to C-peptide molar ratio was 1.1 (more than 1). The results of both the gallium 68 DOTANOC scan and the exendin scan were within normal limits. To confirm the diagnosis, insulin autoantibody titres were measured, which were 68.8 U/mL. 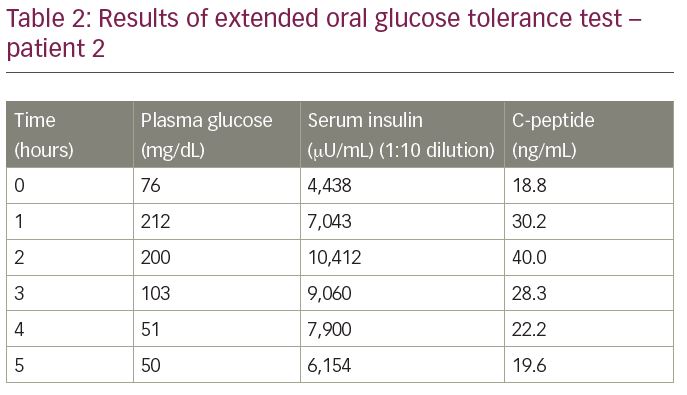 This patient was also started on frequent, small, low-carbohydrate meals. He has not had any recurrence of hypoglycaemia so far (1 year after diagnosis) and is under follow-up care.

IAS – or Hirata’s disease – is a rare case of hyperinsulinaemic hypoglycaemia. This condition was first described by Hirata et al. in 1970.11 There is a strong association with HLA-DR4.12 Unfortunately, due to resource constraints, HLA genotyping could not be done in our patients.

Patients with IAS usually present in adulthood, and there is no predilection for any gender. Hypoglycaemic episodes usually occur in the post-absorptive state, although there have also been reports of fasting-and-exercise-induced hypoglycaemia.13 IAS is commonly associated with other autoimmune conditions, such as Graves’ disease, systemic lupus erythematosus, rheumatoid arthritis and ankylosing spondylitis. Neither of our patients had a history of any other associated autoimmune condition.

Most patients also have exposure to drugs prior to the precipitation of hypoglycaemia. Common drugs that are implicated are methimazole, carbimazole, glutathione, tiopronin, interferon-α, captopril, diltiazem, hydralazine, procainamide, isoniazid, D-penicillamine, imipenem and penicillin G.14 Alpha-lipoic acid – a popular health supplement – has also been linked to IAS.15 In another case report from our institute, proton pump inhibitors were found to induce hypoglycaemia.2

The mechanism of hypoglycaemia in IAS is assumed to be caused by the presence of large amounts of insulin autoantibodies (IAA). After food, there is a rise in blood glucose, followed by an increase in insulin levels. Insulin is then bound by IAA, making the insulin ineffective, which then leads to postprandial hyperglycaemia. This triggers the production of increased amounts of insulin and C-peptide to cope with the postprandial hyperglycaemia. Insulin-IAA complexes create a reserve of insulin: when dissociation occurs, there is a sustained release of free insulin in the
post-absorptive state, leading to more prolonged and severe hypoglycaemia. Sulfhydryl group drugs act as haptens; they interact with the disulphide bonds of insulin and augment its immunogenicity.

There are usually no pathological abnormalities of the pancreas in IAS, but hyperplasia of pancreatic islets has been reported in one patient.19 In another case of IAS, nesidioblastosis was reported on pancreatic biopsy.20

Most cases of IAS are self-limiting, with resolution of symptoms taking place within 3–6 months of initial diagnosis.1 The exact mechanism of self-resolution is not known, yet circumstantial evidence suggests that when the antigen (e.g. the sulfhydryl drug) is withdrawn, the antibodies may wear off over a period of time.1 Cappellani et al. have demonstrated that in IAS induced by alpha-lipoic acid, the insulin auto-antibody levels fell off after the inciting agent (i.e. alpha-lipoic acid) was withdrawn.21

In patients with intractable hypoglycaemia, the first-line treatment includes small, frequent meals that are low in carbohydrate, to avoid postprandial hyperglycaemia and a subsequent rise
in insulin. Short courses of corticosteroids (oral prednisolone 30–60 mg) may be used as adjunct therapy.22,23 Other agents of treatment include acarbose (to reduce carbohydrate absorption), diazoxide, octreotide and partial pancreatectomy (to restrict insulin release) and plasmapheresis (to reduce insulin autoantibody titres).20,22,24,25 Immunosuppressants, such as azathioprine, cyclophosphamide and mycophenolate mofetil also have been tried in IAS.4,26,27 Rituximab, an anti-CD20 monoclonal antibody, has also been used successfully in a few intractable cases where there was a failure of response to steroids.28–31

We have described two cases of IAS, a rare cause of endogenous hyperinsulinaemic hypoglycaemia. IAS should be suspected in any patient usually presenting with postprandial hypoglycaemia, with an unusually high insulin concentration, and moderately raised pro-insulin and C-peptide levels. The insulin to C-peptide molar ratio is more than 1 in IAS. The diagnosis can be confirmed by the measurement of insulin autoantibody titres. An appropriate diagnosis may avoid unwarranted investigations and abdominal exploration. Most cases are self-limiting, while a few intractable cases may require dietary modifications, corticosteroids or steroid-sparing immunosuppressants.

Hiya Boro, Uttio Gupta, Charandeep Singh, Rakhi Malhotra and Rajesh Khadgawat have no financial or non-financial relationships or activities to declare in relation to this article.

Informed consent was received from the patients involved in this case report and no identifying information or images have been included.