Melanocortin-4 receptor (MC4R; OMIM#155541) encodes a 332-amino acids protein possessing typical G-protein-coupled receptors' (GPCRs) structural design having three intact and functional domains, mutations which lead to the most recurrent type of monogenic obesity. Methods: We report here a case of a 5-year-old boy from Iraq who presented to the clinic for evaluation of progressive weight gain since he was 6 months of age. There were no symptoms of hypothalamic dysfunction except increase in appetite. His height was 120 cm (97th centile of the Centers for Disease Control and Prevention [CDC] growth chart, mid parental height was 50th centile), weight was 57 kg (>97th centile on CDC chart) and body mass index was 39.6 kg/m2(>97th centile on CDC chart). A monogenic cause of obesity was strongly suspected in view of early onset severe childhood obesity. Results: Mutation screening of MC4Rrevealed a homozygous isoleucine by arginie at codon 69 (I69R) mutation in the patient, while his father was heterozygous for this mutation. Conclusion: We describe a monogenic form of obesity with characteristic presentation due to I69R MC4Rmutation inherited as an autosomal recessive condition. The finding is different from previous reports which have documented this mutation to be inherited in a dominant manner. The findings of the present study reiterate the complex nature of obesity with possible involvement of modifier genes and/or genetic heterogeneity in its causation.

Obesity is a complex and multifactorial condition caused by various behavioral and environmental factors, socioeconomic background, and genetic susceptibility. The leptin-melanocortin system has a well-established role in energy homeostasis and deficiencies of the vital molecules of the pathway due to defects in the genes encoding those results into a monogenic form of obesity.1

The most recurrent type of monogenic obesity is caused by mutations in the gene that codes for the melanocortin-4 receptor (MC4R). Expressed primarily in neurons, MC4R is a G protein-coupled receptor and is known to mediate the anorexigenic effects of leptin, reducing food intake and increasing energy expenditure. It responds to α-melanocyte-stimulating hormone (α-MSH) an agonist leading to initiation of receptor activity and restraining food intake, whereas sensitizing with an antagonist agouti-related peptide (AgRP) has the reverse effect.2 We report here a case of severe early-onset childhood obesity due to homozygous I69R MC4R mutation.

A 5-year-old boy from Iraq presented to the clinic for evaluation of progressive weight gain since the age of 6 months (Figure 1A). He was a product of consanguineous marriage and his perinatal history was unremarkable. Developmental milestones were appropriate for his age and there were no symptoms suggestive of neuro-developmental abnormalities. There were no symptoms of hypothalamic dysfunction, except increase in appetite, and no family history of morbid obesity except for type 2 diabetes (T2D) in one of his maternal uncles. His father’s height and weight was 171 cm and 82 kg, respectively. His mother’s height and weight was 165 cm and 60 kg, respectively. His height was 120 cm (97th centile of the Centers for Disease Control and Prevention [CDC] growth chart, midparental height 50th centile), weight was 57 kg (>97th centile on CDC chart), and body mass index (BMI) was 39.6 kg/m2 (>97th centile on CDC chart). Blood pressure was 80/52 mmHg (right arm in sitting position). On examination he was prepubertal and had acanthosis over the neck and axillary region. Hemogram, renal function test, and serum electrolytes were within the normal range. Liver function test showed evidence of transaminitis (Table 1). Tests were negative for hepatitis B surface antigen (HBsA) and anti-hepatitis C virus (HCV) antibodies. Ultrasonography of the abdomen showed grade 1 fatty liver with mild hepatomegaly. Non-contrast computed tomography (NCCT) images of the abdomen showed mild hepatomegaly and diffused fatty liver with normal bilateral adrenals. There was no evidence of other endocrine dysfunction (Table 1). Work-up for hypercortisolism was negative. Magnetic resonance imaging (MRI) scan of the pituitary–hypothalamic area and fundus examination were also normal. A monogenic cause of obesity was strongly suspected in view of early-onset severe childhood obesity. 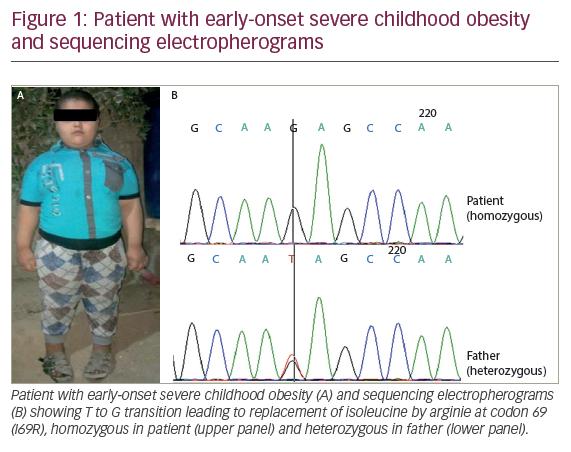 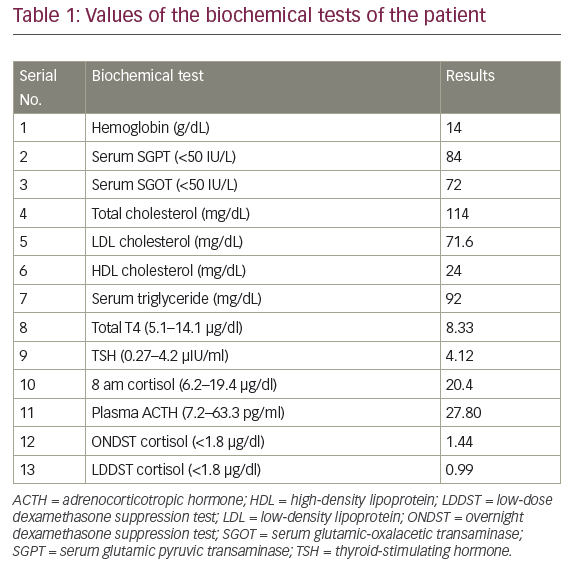 Detailed family history and pedigree information was collected. Peripheral blood sample was drawn in ethylenediaminetetraacetic acid for molecular investigations after taking informed consent from the patient and his father. Genomic DNA was extracted using standard salting out protocol and subjected to polymerase chain reaction amplification of the MC4R gene with primers described previously3 using 90–100 ng DNA, 1.25 mM MgCl2, 0.25 mM of each of the deoxynucleotide triphosphates (dNTPs) (Invitrogen, Carlsbad, CA, US), 10 pM of each primer and 0.5 units of Taq polymerase (Invitrogen, Carlsbad, CA, US) in a 25 ul volume mixture using thermocycler Applied Biosystems (ABI) 9700 (Applied Biosystems, Foster City, CA, US).

Direct sequencing of the MC4R gene in the patient revealed a homozygous isoleucine by arginie at codon 69 (I69R) mutation (Figure 1B). His father was heterozygous for this mutation.

This study reports on a severe form of early-onset childhood obesity due to homozygous I69R MC4R mutation. The father, who was heterozygous for this mutation, did not show any morbid obesity, whereas the mother was unavailable for testing.

The presence of these three intact domains is necessary for stability of the receptor protein, its integration on the cell surface, correct folding, assembly, and its important role in binding to the extracellular ligands activating specific signaling pathways mediated by G proteins.4

More than 150 functionally relevant mutations in MC4R have been identified so far.5,6 In vitro analysis has shown that most of these mutations lead to either total or partial loss of receptor function.7,8 Studies on various ethnic groups described so far revealed that the majority of MC4R mutations are inherited as autosomal-dominant trait with a single copy of the mutant allele whereas homozygous carriers are very rare and exhibit a more severe phenotype. Some studies have shown that heterozygous mutation carriers of the MC4R gene may or may not be obese, while homozygous individuals are all extremely obese.9,10

The functional study on MC4R mutation revealed that I69R mutant receptor had no measurable binding with the ligands, giving no response to agonist/antagonist stimulation demonstrating that I69 is an important residue for cell surface expression located in the first trans membrane domain.12

Genetic findings in the present report are unique, as the patient with severe obesity has I69R mutation present in homozygous state while his father, a heterozygous carrier, does not show any signs of the condition. This finding is in contrast with a previous report wherein a single copy of the I69R mutation was sufficient to cause severe childhood-onset obesity.11

Behavioral patterns in children, such as eating larger meals and viewing television have been shown to be associated with MC4R mutations to some extent. Similar behavior patterns have been seen in our case, which is in accordance with published reports.13,14

In conclusion, we describe a monogenic form of obesity with characteristic presentation due to I69R MC4R mutation inherited as an autosomal recessive condition, requiring two mutant alleles to express. The father, who was a carrier of the mutation, was normal and did not show any obesity-related symptoms, which is in contrast to previous reports.

The findings of the present study reiterate the complex nature of obesity, with the possible involvement of modifier genes and genetic heterogeneity in its causation.

Shweta Birla, Deepak Khandelwal, Arundhati Sharma, and Rajesh Khadgawat have nothing to declare in relation to this article. No funding was received in the publication of this article.