There is an unmet need for adjunctive non-insulin-based therapies in type 1 diabetes (T1D). Weight gain, recurrent hypoglycemia and suboptimal glycemic control remain significant challenges. Sodium-glucose co-transporter-2 (SGLT2) inhibitors and dual inhibitors of sodium-glucose co-transporter-1 (SGLT1) and SGLT2 may have a potential role as an add-on therapy to insulin. The benefits include improved glycemic control, weight reduction, and reduced insulin dose requirement. However, the risk of diabetic ketoacidosis with SGLT2 inhibitors is significant and the diagnosis may be delayed due to absence of significant hyperglycemia. At present, SGLT2 inhibitors are not approved for use in T1D, and the risks should be discussed at length with the patient. We propose strategies to minimize the risk of diabetic ketoacidosis associated with off-label use of SGLT2 inhibitors in T1D.

There is a rising trend of overweight and obesity in individuals with type 1 diabetes (T1D). The prevalence of overweight and obesity among newly diagnosed T1D subjects was 21–22% in the 2–19 year age group in the Pediatric Diabetes Consortium and the SEARCH for Diabetes in Youth study.1,2 This has been attributed to a general worldwide increase in prevalence of obesity and similar risk factors such as family history, ethnicity, and sedentary lifestyle may be contributory. But several other factors related to insulin treatment may further exacerbate weight gain. Hypoglycemia and defensive snacking result in a state of calorie excess. Over-insulinization to achieve glycemic targets compounds the problem. In the DCCT (NCT00360815) and EDIC (NCT00360893) trials, excessive weight gain was associated with an increase in central obesity, insulin resistance, dyslipidemia, hypertension, and atherosclerosis.3 Approximately 50% patients with T1D have features of metabolic syndrome.4

Is there a need for adjunctive therapy in type 1 diabetes?

Non-insulin anti-diabetic medications have often been considered as adjunctive to insulin therapy to improve metabolic control in T1D.6 The aim of such adjunctive therapy would be:

Drugs which have been explored for their role in T1D, with limited success, include pramlintide, metformin, pioglitazone, glucagon-like peptide 1 (GLP-1) receptor agonists, SGLT2 inhibitors and dual SGLT1 and SGLT2 inhibitors.5,6 Pramlintide, an amylin analogue, is the only drug currently approved for use as adjunctive therapy in T1D. Trials of GLP1 receptor agonists have demonstrated small reductions in glycated haemoglobin (HbA1c) levels accompanied by weight loss and reduced insulin dose but a significantly increased risk of hypoglycemia.6,7 In the recently published multicentre trial with metformin in T1D adults with high cardiovascular risk (REMOVAL; NCT01483560), metformin demonstrated reductions in body weight, low density lipoprotein (LDL) cholesterol and maximal carotid intima media thickness (cIMT), though the mean cIMT (primary outcome) was not affected.8

Sodium-glucose co-transporter-2 (SGLT2) inhibitors reduce renal glucose reabsorption and promote glucouresis and natriuresis. In trials of type 2 diabetes (T2D) patients, they have demonstrated significant glucose-lowering efficacy and moderate reductions in blood pressure, lipids, uric acid, and body weight (predominantly loss of fat mass). These benefits have been demonstrated even when SGLT2 inhibitors have been used as add-on to insulin therapy in T2D, with no increased risk of hypoglycemia and an attenuation of insulin-related weight gain. Long-term outcome studies and real-world data have suggested that they have cardio-protective and potential reno-protective benefits in patients with high cardiovascular risk.9 Since the mechanism of action does not depend on endogenous insulin secretion and there are multiple pleiotropic benefits, SGLT2 inhibition is an attractive target in T1D management, as adjunctive to insulin. Likely benefits are better glycemic control, reduced insulin dose requirements, weight and blood pressure reduction, reduction in insulin resistance and possible cardio-protection and reno-protection.

In animal models of T1D, SGLT2 inhibitors have demonstrated glucose-lowering effects. Empagliflozin increased urinary glucose excretion (UGE) and improved glycemic control in streptozotocin-induced T1D rats.10,11 In T1D mice, empagliflozin treatment significantly improved glucose tolerance with improvements in mRNA and serum insulin levels.10. The authors hypothesized that empagliflozin may help in the preservation of β-cell mass, evidenced by reduction in β-cell apoptosis and stimulation of β-cell proliferation, possibly due to protection of β-cells from glucotoxicity-induced oxidative stress.

Empagliflozin significantly lowered 24-hour UGE in 75 T1D individuals. Compared to placebo, the HbA1c reduction was -0.35 to -0.49%, total daily insulin dose was reduced by -0.07 to -0.09 U/kg, and weight reduction was -1.5 to -1.9 kg. The rate of symptomatic hypoglycemia or hypoglycemia requiring assistance was not increased.17 The 24-hour mean glucose area under curve was significantly reduced, compared to placebo: adjusted mean difference was -30.2 mg/dl/h (95% confidence interval [CI] -42.2 to -18.2) with empagliflozin 10 mg and -33.0 mg/dl/h (95% CI -44.8 to -21.1) with empagliflozin 25 mg. Glucose variability was significantly decreased, time spent in target glucose range was increased and there was no increase in time spent in hypoglycemia.18

In an 18-week, phase 2 study including 351 patients on multiple daily injections or CSII, canagliflozin was associated with decreases in HbA1c, insulin dose and body weight.19 Eighty-nine of these participants underwent CGM and canagliflozin use was associated with improved indices of glycemic variability.20 In another CGM study, significant reductions in mean blood glucose, CGM standard deviation, time spent in hyperglycemia, HbA1c, weight, systolic blood pressure (SBP), and total daily insulin dose were reported in 27 patients with canagliflozin as add-on to insulin.21 Similar benefits have been reported with ipragliflozin and remogliflozin in small pilot studies.14,22

In a recent meta-analysis of three randomized controlled trials including 178 patients, SGLT2 inhibitor use was associated with reduction in fasting blood glucose and insulin dosage, with no significant risk of urinary tract infections, genital infections or diabetic ketoacidosis (DKA).23 In another systematic review of all studies published till March 2017, SGLT2 inhibitors led to overall reduction of HbA1c (up to 0.49%) and weight (up to 2.7 kg) and lower total daily insulin dose, with lower incidence of hypoglycemia.24

Empagliflozin resulted in a decrease in arterial stiffness in young patients with T1D.25 In another study, empagliflozin significantly reduced renal hyperfiltration, with decline in plasma nitric oxide (NO) and effective renal plasma flow over 8 weeks.26 In a mouse model (Akita mice) of T1D, dapagliflozin resulted in significant reduction in mesangial matrix expansion and renal interstitial fibrosis, along with reduction in hyperglycemia-induced oxidative stress, compared to insulin.14,27 In T2D outcome trials, empagliflozin and canagliflozin have demonstrated cardio-protection and reno-protection. This leads to the hope that SGLT2 inhibitors may reduce nephropathy progression and cardiovascular risk in T1D as well.

However, most studies have been of short duration and small sample size, and no conclusions can be made about the long-term efficacy and safety of SGLT2 inhibitors in T1D. There are limited data that SGLT2 inhibitors improve average glucose and glycemic variability, reduce postprandial hyperglycemia, promote weight reduction, and reduce total daily insulin dose requirement without increased risk of hypoglycemia in T1D.

SGLT2 inhibitors are associated with an increased risk of genital mycotic infections, urinary tract infections, and volume depletion. Recent studies in T2D have raised concerns about their long-term effects on bone health and increased risk of fractures and lower extremity amputations, as seen with canagliflozin. An assessment of the impact of chronic SGLT2 inhibition on bone health and amputation risk in T1D is especially pertinent as these patients are at high risk of osteoporosis, fractures, neuropathy, peripheral vascular disease, and amputations.28,29

Most importantly, there has been growing concern about the increased risk of ketoacidosis associated with the use of SGLT2 inhibitors. In animal studies, phlorizin induced hyperketonemia in rats and decreased the renal clearance of acetoacetate in dogs. Ipragliflozin led to significant increase in free fatty acid (FFA) and β-hydroxybutyrate levels in obese mice fed on a high-fat diet. Tofogliflozin caused a dose-dependent increase in acetoacetate and β-hydroxybutyrate levels in patients with T2D.30 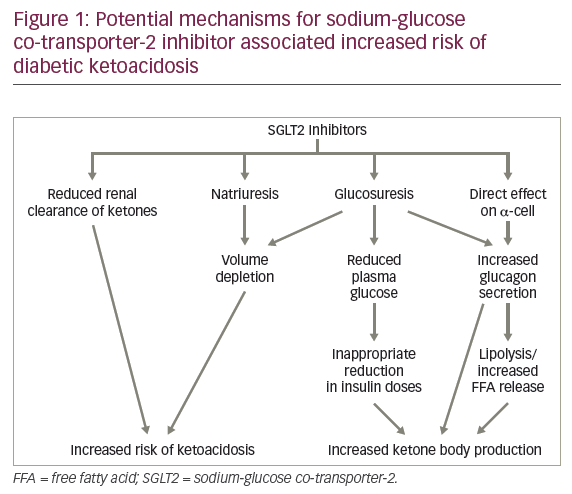 There have been several case reports of SGLT2 inhibitor-associated DKA in individuals with both T1D and T2D. In several of these reports, hyperglycemia has not been marked, often leading to a delay in detection of DKA. This entity of euglycemic diabetic ketoacidosis has previously been reported with decreased carbohydrate intake, alcohol consumption, and during pregnancy. In May 2015, the US Food and Drug Administration (FDA) issued a warning about the increased risk of diabetic ketoacidosis associated with SGLT2 inhibitors. In a recent review of FDA adverse event reporting data, the authors found 46, 144, and 450 reports of ketoacidosis associated with empagliflozin, dapagliflozin, and canagliflozin.34 There have been some case reports from southeast Asian countries35,36 and reports of ketonemia and ketonuria in patients from India.37,38

Sotagliflozin is a dual SGLT1 and SGLT2 inhibitor, under development for use as adjunctive therapy in T1D.39 SGLT1 mediates the intestinal absorption of glucose and galactose and renal glucose reabsorption distal to SGLT2 effect. Thus, sotagliflozin reduces renal glucose reabsorption via SGLT2 inhibition and glucose absorption from the gastrointestinal tract via SGLT1 inhibition. Inhibition of SGLT1 thus reduces postprandial glucose excursions and also stimulates the release of glucagon-like peptide 1 (GLP1) and polypeptide YY (PYY), which offers further therapeutic benefits.40 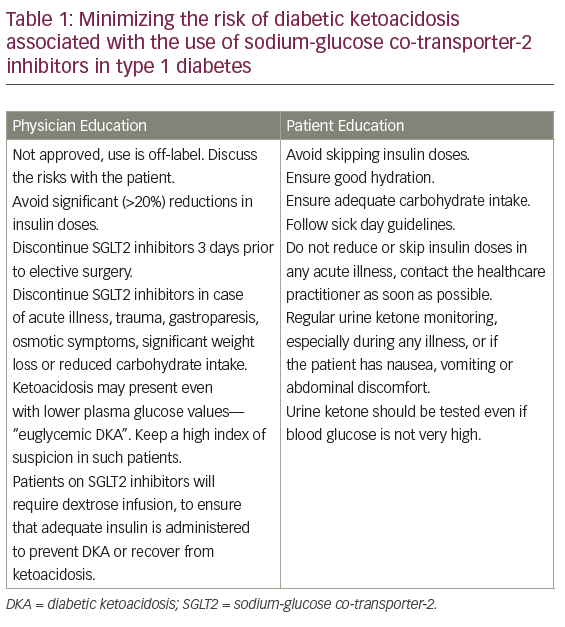 SGLT2 inhibitors may increase the risk of DKA in T1D both directly and indirectly.30,43 SGLT2 inhibitor use may lead to deceptively lower blood glucose values and prompt inappropriate reduction in insulin doses to mitigate the risk of hypoglycemia. Resultant insulinopenia increases lipolysis, FFA release and ketogenesis. SGLT2 inhibitors lower the renal threshold for glucose to 70 mg/dl, causing large amounts of glucose to be lost in urine. Therefore, blood glucose values may not be significantly elevated in patients with DKA, with the potential risk of a delay in diagnosis.

The off-label use of SGLT2 inhibitors in T1D is increasing, despite the lack of adequate safety data, and this is a cause for concern. There is no experience with the use of SGLT2 inhibitors in the pediatric population and it should not be used in such settings at all. Any use of SGLT2 inhibitors in T1D, at present, is off-label and the risk of diabetic ketoacidosis along with the lack of long-term safety data must be discussed at length with the patient.49 If their use is being considered at all, the practitioner should be very cautious and ensure appropriate patient education. There is also a need for all healthcare practitioners to keep a high index of suspicion for DKA in any patient using SGLT2 inhibitors and presenting with an acute medical or surgical illness. This is true even for those patients in whom blood glucose is apparently lower than one would expect in DKA, since euglycemic DKA has been frequently reported in such patients. In Table 1, we recommend strategies to minimize the risk of DKA associated with the use of SGLT2 inhibitors. These strategies will be useful in T2D patients as well.

While SGLT2 inhibitors have the potential to improve glycemic control, reduce insulin dose requirements and reduce insulin-associated weight gain, the risk of DKA must be considered and adequate measures taken to prevent its occurrence. Any use of SGLT2 inhibitors in T1D is off-label and the risks must be discussed with the patient.

Gagan Priya, Sanjay Kalra, and Vishal Bhambri have nothing to declare in relation to this article. No funding was received in the publication of this article.

Tirzepatide: A Novel, Once-weekly Dual GIP and GLP-1 Receptor Agonist for the Treatment of Type 2 Diabetes

For people with type 1 diabetes mellitus (T1DM) or type 2 diabetes mellitus (T2DM), glycaemic control has been monitored by two key measurements: laboratory-tested glycated haemoglobin (HbA1c) level and the individuals’ self-monitored blood glucose (SMBG) fingerprick testing.1,2 Both of these measurements have significant limitations. HbA1c provides a surrogate assessment of the average glucose levels of the […]

The pandemic of type 2 diabetes mellitus (T2D) is a growing concern, especially in low- and middle-income countries, which contribute to nearly 75% of the disease burden.1 Indian patients with T2D constitute 1 in 6 adults with T2D globally, with marked differences in prevalence across the states.2,3 The younger age of onset and faster progression from prediabetes […]

Tirzepatide: A Novel, Once-weekly Dual GIP and GLP-1 Receptor Agonist for the Treatment of Type 2 Diabetes