Thyroid disease has commonly been associated with hair loss, predominantly manifesting as diffuse thinning of the scalp and the lateral eyebrows. This can be of particular concern to patients, and may motivate some to seek medical evaluation. Indeed, thyroid disease has also been linked to clinically significant types of alopecia, including alopecia areata (AA)1–3 and telogen effluvium.4–6 The role of thyroid disease in other causes of alopecia including lichen planopilaris (LPP) and frontal fibrosing alopecia (FFA) remains unclear. AA is an autoimmune process involving non-scarring hair loss that affects between six to seven million individuals in the US.7 LPP and FFA are clinical variants of scarring alopecia that are indistinguishable on histopathology. LPP is a follicular form of lichen planus that results in scarring hair loss generally in multifocal regions of the scalp. In contrast, FFA is a variant of LPP that causes gradually progressive hair loss at the frontotemporal hairline of postmenopausal women. This study retrospectively assessed the role of thyroid dysfunction in AA, LPP and FFA.

Methods
A systematic chart review of all patients seen in the UCLA Hair Disorders Clinic from September 2010 to July 2013 was performed. All patients with a diagnosis of FFA or LPP and a randomized subset of 50 patients with AA were included in the study. An age- and sex-matched control group was randomly selected from other patients seen in the UCLA Dermatology Clinic who did not have alopecia. Data obtained from chart review included gender, age, history of dermatologic conditions, TSH levels, and history of thyroid dysfunction. Patients were defined as having thyroid dysfunction if they had been diagnosed with hypothyroidism, hyperthyroidism, Hashimoto’s thyroiditis, thyroid cancer, and other/not specified thyroid dysfunction. Univariate and multivariate logistic regression models were constructed to predict thyroid disease using alopecia group, gender, age, and TSH. 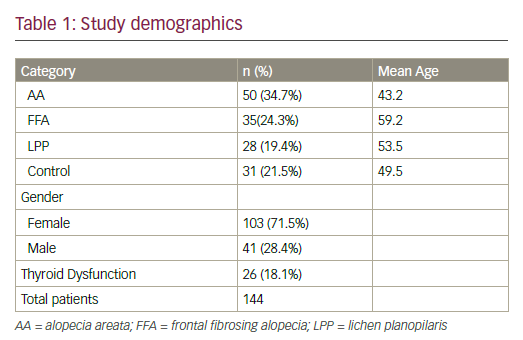 and 15.1% of control patients. After controlling for age and sex, alopecia was not found to be a statistically significant predictor of thyroid disease (see Table 2).

While some studies suggest that thyroid autoimmune disease is associated with AA,1–3,11,12 other case-control studies have been conflicting. Two large case control studies recently found no statistically significant associations with thyroid dysfunction and AA.13–14 Atanaskova et al. reported a higher rate of thyroid disease in LPP of 34%, as compared to the 11% found in their control group.15 Regardless, a positive history of hypothyroidism in AA patients has been shown to be a predictor of more severe alopecia. AA patients with hypothyroidism are at a threefold increased risk for a more involved form of AA, such as alopecia totalis, alopecia universalis, or persistent patchy AA.1 Research has shown that AA is an autoimmune T-lymphocyte mediated process directed toward hair follicles.16

Autoimmunity may play a role in LPP and FFA as well. In vitro studies of LPP affected skin suggest that interferon-ϒ mediates autoimmune destruction of epithelial hair follicle stem cells.17 FFA has been associated with other autoimmune conditions such as vitiligo, and its histopathologic characteristics of a perivascular lymphocytic infiltrate may also suggest an autoimmune process.18 Our study neither supports nor refutes that LPP and FFA could be autoimmune diseases.

The rate of thyroid disease in our control group was higher than that of nationwide reported rates, however, the rates of thyroid disease within our alopecia groups were in accordance with previously published data.1,8,9,19–20 Our study population included a higher proportion of female patients (71.5%) compared to data from the local West Los Angeles region (which is 51.6% female).21 Thyroid dysfunction more commonly affects women,22 and thus this may affect our observed rate of thyroid dysfunction. However, we have no reason to believe that our study population differs largely from populations served by other healthcare institutions. Data regarding free T4 levels and thyroid peroxidase antibodies were not analyzed in our study, and could be an avenue for future research. Further investigation at other institutions may be warranted to confirm the results of our study.

Thu Q Nguyen, Monica Tsai, Tristan Grogan, and Carolyn Goh have nothing to disclose in relation to this article. No funding was received in the publication of this article.
Compliance with Ethics: Patient data were retrospectively evaluated for this study. Institutional approval was obtained, and the study was deemed exempt from the need to procure subject consent.
Authorship: All named authors meet the International Committee of Medical Journal Editors (ICMJE) criteria for authorship of this manuscript, take responsibility for the integrity of the work as a whole, and have given final approval to the version to be published.