Objective: Despite its beneficial effect on postprandial hyperglycemia, effect and usage of voglibose for the management of type 2 diabetes mellitus (T2DM) in routine clinical practice remain undetermined. The objective of this non-interventional study is to determine real-world effectiveness of voglibose in terms of efficacy and safety, and the usage pattern as monotherapy or add-on treatment in patients with T2DM in India. Design: This was a 12-week, multi-center, prospective, observational study. Methods: Adults with inadequately controlled T2DM (glycated hemoglobin [HbA1c] 7.0–10.0% despite diet, exercise and/or antidiabetic agents), treated with voglibose monotherapy or as add-on therapy were recruited from 39 sites. The primary endpoint was change in HbA1c. Secondary endpoints were change in fasting and postprandial blood glucose (FBG and PPBG) levels and bodyweight, pattern of usage and safety assessments. Mean change in HbA1c, FBG and PPBG levels were analyzed using paired t-test with significance value of 5%. Trial Registration: ctri.nic.in CTRI/2017/02/007878. Results: A total of 1,542 participants were enrolled and 1,365 completed two study visits. Mean HbA1c was 8.27% at baseline, which reduced to 7.29% at week 12 (0.98% change, p<0.001). At week 12, mean reductions in FBG and PPBG levels and bodyweight were 27.1 mg/dL (p<0.001), 52.2 mg/dL (p<0.001), and 1.00 kg (p=0.121), respectively. Most participants (75%) received voglibose as add-on therapy and the most commonly prescribed concomitant oral antidiabetic drugs were metformin and sulfonylurea (29%). Flatulence (0.5%) and abdominal discomfort (0.3%) were most commonly reported adverse events in the study. Conclusions: Voglibose, monotherapy or add-on therapy, significantly reduced HbA1c, FBG and PPBG and was well tolerated in patients with T2DM in a real-world setting.

India, being an epicenter of diabetic population, faces increases in disease prevalence of more than double, every 15 years, and is projected to have about 123.5 million cases by the year 2040.1 In addition to achieving target glycated hemoglobin (HbA1c) <7%, intensive control of blood glucose levels is important in order to retard or arrest the development and progression of the microvascular complications of diabetes. Changes in postprandial blood glucose (PPBG) levels precede those in fasting blood glucose (FBG) and finally in HbA1c. Hence, the management of both FBG and PPBG is critical to achieving full glycemic control;2 the latter often being more challenging to achieve.3

Voglibose, an alpha-glucosidase inhibitor, reduces PPBG when used alone or in combination with other antidiabetic drugs. Its efficacy and safety are well established in multiple randomized controlled trials (RCTs), which conclude it to be an effective oral antidiabetic drug (OAD) with good tolerability profile and cardiovascular benefits.4,5

The design of RCTs, often considered gold standard for evaluating safety and efficacy of therapeutic agents, necessitates strict eligibility criteria for patients’ inclusion, which questions the representability of the study population to that encountered in clinical practice. Real-world studies, on the other hand, demonstrate the picture of large datasets from diverse patient populations. Additionally, studies of an observational nature, wherein data have been collected over a long period, provide evaluation of long-term safety and effectiveness of the drug in large heterogeneous populations, as well as information on utilization patterns. Thus, real-world studies have broader generalizability and are an effective tool to confirm the results of RCTs in clinical practice.6 However, there are scarce data available to demonstrate effectiveness of voglibose in real-world settings, especially in Indian population. Currently available literature covers a few Indian studies of voglibose in real-life settings, which include only a small number of patients from one or two centers.7,8 Hence, this non-interventional, observational study was planned with an objective to assess the real-world effectiveness of voglibose by determining its efficacy, safety and usage as monotherapy or add-on treatment in patients with type 2 diabetes mellitus (T2DM) from multiple sites of India.

VICTORY was a 12-week, prospective, observational, multicenter study conducted between October 2016 and August 2018. Participants were recruited by 39 private clinical practitioners (endocrinologists and diabetologists) from both urban and rural sites across India. Adult participants, of either sex, aged ≥18 years, with inadequately controlled T2DM (HbA1c 7.0–10.0%) despite diet, exercise and/or antidiabetic agents were included in the study. Patients with T1DM, those with history of hypoglycemia episodes or ketoacidosis, and other medical conditions that could potentially hinder the safe conduct of the study were excluded. Even though considered safe, use of voglibose is contraindicated in patients with ketoacidosis and is also associated with reports of hypoglycemia.9 Based on these facts, we excluded the patients with history of hypoglycemia or ketoacidosis from this study. Patients participating in any other clinical trials and pregnant or lactating women and those of child-bearing potential and not using adequate contraception were also excluded. Data of participants receiving voglibose (0.2 mg or 0.3 mg; either alone or as add-on with other OADs based on investigators’ discretion) in routine clinical practice were collected.

The study was performed in compliance with the principles of the Declaration of Helsinki, in accordance with the International Conference of Harmonization Guideline for Good Clinical Practice, and in accordance with applicable regulatory requirements. All participants provided written informed consent. The study was registered at Clinical Trial Registry of India with registration number CTRI/2017/02/007878.

The primary endpoint was mean change in HbA1c levels from baseline to week 12. Secondary endpoints were mean change in FBG, PPBG, and bodyweight from baseline to week 12; the usage patterns for voglibose (monotherapy or add-on therapy with other OADs); and adverse events (AEs) reported during the study period. AEs were classified as mild (no interference with usual activity), moderate (significant interference with usual activities), and severe (prevents usual activities).

Considering the large sample size, it was assumed that data were normally distributed according to the central limit theorem. Continuous variables were reported as mean and standard deviation (SD) and categorical variables were presented as absolute frequency and percentage. Data were analyzed and the mean change in HbA1C, FBG, PPBG and weight along with SD were subjected to statistical analysis using paired t-test with significance value of 5%. Safety review was performed using intent-to-treat dataset (all participants who were recruited in the study irrespective of study completion), while efficacy analysis was performed using per protocol dataset (all participants who completed the study as per the protocol). 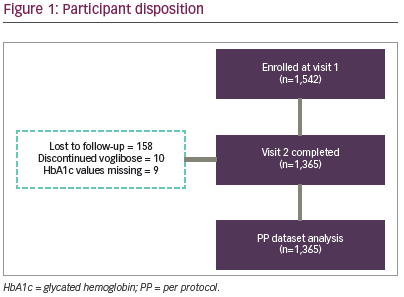 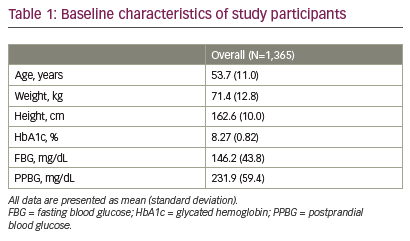 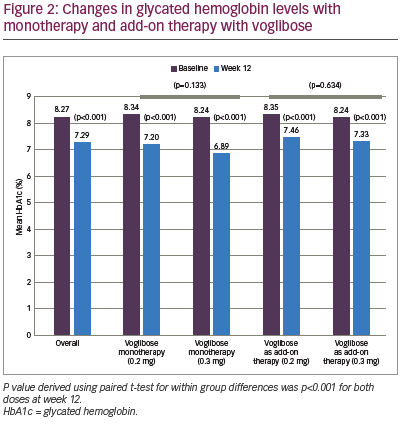 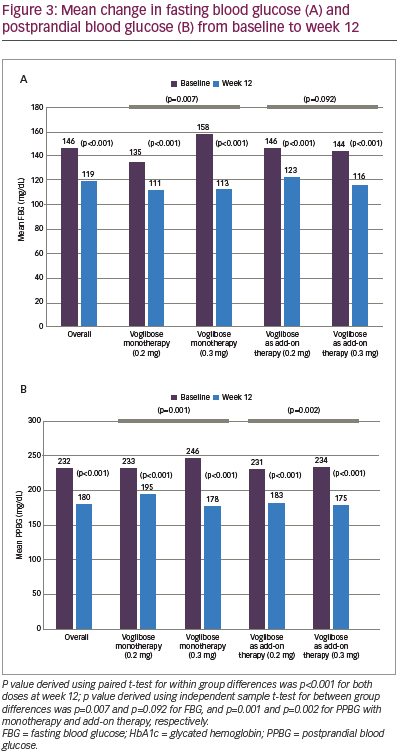 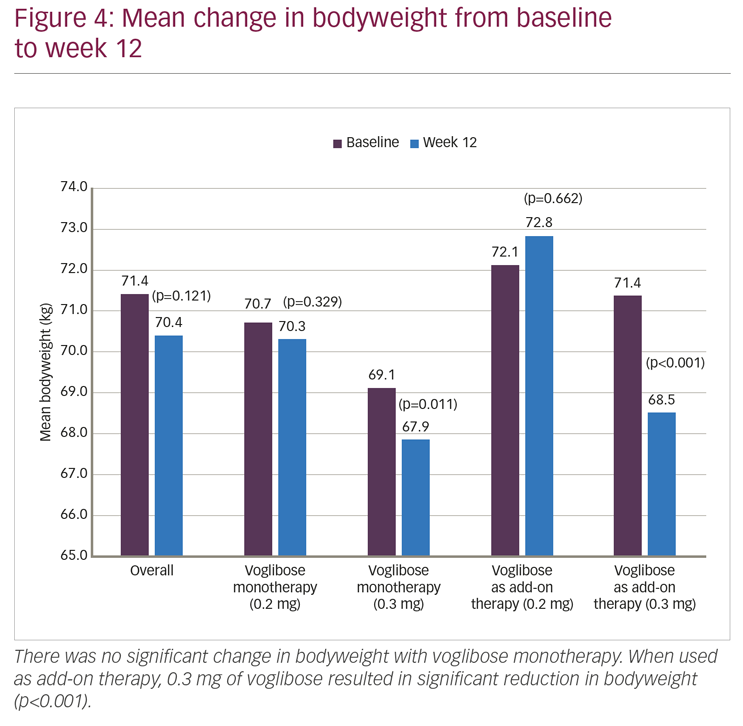 Alpha-glucosidase inhibitors (voglibose and acarbose) were introduced as first-line therapy to attain better PPBG control by the Research Society for the Study of Diabetes in India diabetes management guidelines.10 Despite being reported as an efficacious and safe treatment option, utilization of voglibose remains undetermined for the management of diabetes in real-life settings. The VICTORY study includes analysis of large population of patients with T2DM from varied geographical regions of India.

In the present study, there was non-significant (p=0.121) reduction of 1.0 kg in bodyweight observed at end of 12 weeks. Contrary to our observations, Talaviya PA et al. reported significant reduction in bodyweight at 8 weeks (77.85 ± 9.43 versus 74.84 ± 8.1; p<0.05) and 12 weeks (77.85 ± 9.43 versus 73.52 ± 7.68; p<0.05) of treatment with voglibose when compared to baseline.16 However, Jindal et al. have reported no significant change in bodyweight after 6 months of treatment with voglibose.15 Differences seen between results of this study and that of the ones by Talaviya PA et al.16 could be explained by the retrospective nature, obese patient population, and small sample size (N=77) of the latter.

In our experience, voglibose monotherapy or add-on therapy was safe for use in participants with T2DM, with no serious AEs reported. Flatulence and abdominal discomfort were the most commonly reported AEs and most AEs were of mild intensity. This is consistent with the safety and tolerability of voglibose reported in several studies.14,17,16,19–21 However, the underreporting of safety events, as suggested by the low rates of AEs, is a common problem in observational studies.7,17,22 In contrast to RCTs, the data collection of AEs was based on the voluntary reporting by the investigators, who are more likely to report serious AE in clinical practice.

The short observation period and the lack of a control group are the main limitations of this study. However, the latter increases the propensity of results to be more generalizable and replicable in clinical practice, which is necessary to complement the information retrieved from RCTs. Real-life studies and RCTs both have strengths and limitations and those should be appreciated as complementary to one another.

The strength of the VICTORY study is the large sample size from multiple real-life set-ups across India. This clearly supports widespread use of voglibose in patients with T2DM in real-world practice. Additionally, it also indicates enthusiasm and interest of both patients and healthcare professionals to be part of such undertakings. Having excluded the non-qualifying and incomplete data, we tried to optimize the quality of the data, which were utilized for the final analysis in this study.

The VICTORY study demonstrates real-life effectiveness of voglibose monotherapy or add-on therapy, which significantly reduced HbA1c, FBG, and PPBG in patients with T2DM. Voglibose was most commonly added with metformin and sulfonylureas. It was well-tolerated by the participants with T2DM without significant weight change. Efficacy of voglibose in a large population with T2DM seen in this study is the real-world reflection of the results obtained in randomized trials.

Compliance with ethics: All ethical approvals required for the study was obtained before the start of the trial and details have been mentioned in Trial Registration: www.ctri.nic.in (CTRI/2017/02/007878). The study was approved by Sangini Hospital Ethics Committee, Ahmedabad, Gujarat. All procedures were followed in accordance with the responsible committee on human experimentation and with the Helsinki Declaration of 1975 and subsequent revisions, and informed consent was received from the patient involved in this study.

This article is freely accessible at touchENDOCRINOLOGY.com. ©Touch Medical Media 2020.

The authors wish to thank participating investigators for contributing participants’ data for this
study. Altaf Makwana and Ashutosh Kakkad were involved in technical editing of the manuscript. Robin Nath and Saurabh Kumar provided administrative support for the conduct of this study. The authors also acknowledge MediCeption Science Pvt Ltd. for providing writing assistance and Devum Research for statistical analysis, which were funded by Torrent Pharmaceuticals Ltd., India.