The ‘diabetes of injury’ typically associated with critical illness has recently been thoroughly revisited and much better characterised following major therapeutic advances. The occurrence of severe hyperglycaemia, moderate hypoglycaemia or high glycaemic variability has been associated with an increased mortality and rate of complications in large independent cohorts of acutely ill patients. Hence, current guidelines advocate the prevention and avoidance of each of these three dysglycaemic domains, and the use of a common metrics for a quantitative description of dysglycaemic events, such as the proportion of time spent in the target glycaemic range as a unifying variable. Using a common language will help to face the future challenges, including the definition of the most appropriate blood glucose (BG) target according to the category of admission, the time interval from the initial injury and the medical history. The clinical testing of technological improvements in the monitoring systems and the therapeutic algorithms should be assessed using the same metrics.

Acute illness is typically associated with the so-called ‘stress-induced hyperglycaemia’, defined as a transient hyperglycaemia in patients without previous evidence of diabetes.1 The strong relationship between stress hyperglycaemia and poor outcome is largely established and actually validates hyperglycaemia as a marker of illness severity.

The correction of a moderate stress hyperglycaemia may improve the prognosis. Indeed, in 2001, a large single-centre randomised controlled trial (RCT) in critically ill surgical patients demonstrated that tight glucose control (TGC) (defined as the restoration and maintenance of blood glucose [BG] concentration between 4.4 and 6.1 mmol/l [80 and 110 mg/l]) by intensive insulin therapy (IIT) was associated with decreased mortality and rate of complications.2 However, subsequent studies performed in other intensive care units (ICUs)3–8 failed to reproduce the beneficial effects of IIT titrated to achieve TGC.9 The controversy that followed these conflicting results triggered a major interest in the physiopathology of stress response, resulting in important findings and a re-appraisal of the current knowledge.

This review intends to provide a brief summary of the current understanding of the toxicity of prolonged hyperglycaemia, the mechanisms underlying the three domains of dysglycaemia, that is, hyperglycaemia, hypoglycaemia and high glycaemic variability (GV), and the available clinical data from observational and interventional studies, and to outline some of the challenges for the future of the field.

In stress conditions, an overall massive glucose overload happens in organs where glucose uptake is not regulated by insulin, usually quoted as non-insulin-mediated glucose uptake (NIMGU) tissues, under the influence of pro-inflammatory mediators, counterregulatory hormones, and hypoxia.10 Hence, a wide range of tissues, including hepatocytes, endothelial cells, neurons, nephrons and immune cells, may be susceptible to enhanced glucose toxicity as a result of acute illness. Several deleterious effects have been associated with these high glucose concentrations in cells.1,11 Damage to mitochondrial proteins occurs and the formation of reactive oxygen species (ROS) is increased as a consequence of the shift from glycolysis towards accessory metabolic pathways (pentose phosphate, hexosamines, polyols).12 Other effects of excess glucose concentrations include the exacerbation of inflammatory pathways, decreased complement activity, modifications in the innate immune system, impairment in endothelial and hepatic mitochondrial functions and abolishment of the ischaemic preconditioning and protein glycosylation. Acute complications attributed to stress hyperglycaemia include renal failure, increased susceptibility to infections, polyneuropathy and impaired microcirculation.1 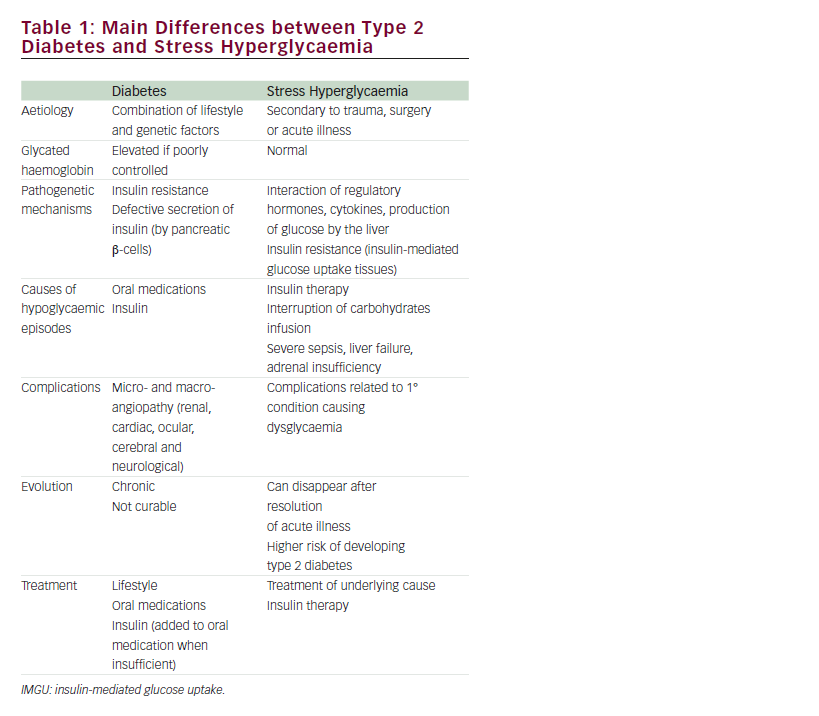 associated with insulin resistance of the tissues where glucose uptake is insulin-dependent (IMGU), perhaps as an adaptive response needed to promote survival during the acute phase.10,13 Indeed, this highly complex interplay is largely variable over time.1,12

The stress-related increase in hepatic output of glucose results from glycogenolysis and gluconeogenesis. Glycogenolysis is primarily triggered by catecholamines and perpetuated under the influence of epinephrine and cortisol. Gluconeogenesis is triggered to a larger extent by glucagon than by epinephrine and cortisol. Among the numerous inflammatory mediators released in the acutely ill, tumour necrosis factor-α (TNFα) might promote gluconeogenesis by stimulating glucagon production. The increase in peripheral resistance is characterised by the inability of skeletal muscles and adipocytes to take up glucose, related to an alteration of insulin signalling and a downregulation of type 4 glucose transporters (GLUT-4).

An increased glucose reabsorption or a decreased renal glucose clearance has also been reported and likely contributes to hyperglycaemia in acute conditions.14 In the post-operative patient, the surgical stress itself is an important trigger, via the induction of insulin resistance under the influence of cytokines and counterregulatory hormones. The degree of insulin resistance has been related to the magnitude and the duration of the surgical stress. The avoidance of hypothermia, excessive blood losses, prolonged pre-operative fasting period and prolonged immobilisation synergises to reduce perioperative insulin resistance.

Regardless of the underlying cause, hypoglycaemia is physiologically reversed counterregulatory mechanisms, activated in a stepwise manner.15,16 The successive steps include the inhibition of insulin secretion, followed by the release of glucagon, epinephrine, growth hormone and cortisol in cases of worsening hypoglycaemia. Glucagon will stimulate the production of glucose by glycogenolysis and gluconeogenesis at the liver, while epinephrine will help to increase BG by inhibiting glucose utilisation by several tissues and stimulating glycogenolysis and gluconeogenesis at the liver, acting via beta-2-adrenergic receptors. Cortisol and growth hormone will stimulate the hepatic glucose production.

These protective homeostatic mechanisms against hypoglycaemia are altered in patients with diabetes. Secretion of insulin is inexistent in patients with type 1 diabetes and diminished in type 2 diabetes, and the glucagon and epinephrine response to hypoglycaemia can be blunted. In the critically ill, hypoglycaemia can either occur spontaneously or can be induced by iatrogenic factors, such as interruption of infusion of a nutritional solution or insulin infusion. Spontaneous episodes of hypoglycaemia include end-stage liver failure and adrenal failure during septic shock. In these conditions the physiological response to hypoglycaemia is blunted. In case of iatrogenic episodes, the ability to increase the release of glucagon, epinephrine or cortisol can be impaired, in relation to the metabolic stress. Importantly, regardless of the underlying cause, hypoglycaemia is most often asymptomatic during critical illness, in relation to sedation and/or altered mental status.

The complex mechanisms of BG regulation and homeostasis are altered in critically ill patients, especially during sepsis and after trauma and major surgery, as a result of the increased secretion of cytokines and hormones,17 which can alter the neural and hormonal physiological regulatory pathways of BG. In addition, treatment-related factors, such as the type and route of nutrition and insulin therapy, can also increase GV.

Quite consistently, retrospective studies performed on large cohorts of different categories of critically ill patients reported poorer outcome of patients who experienced dysglycaemic events. However, the strength of the relationship between markers of dysglycaemia and outcome is variable according to the diabetic status. Overall, admission hyperglycaemia was found as an independent marker of mortality and morbidity.22–25 Patients with an average BG below 7.8 mmol/l (<140 mg/dl) was associated with a better outcome than those with a higher average BG.22–25

After cardiac surgery, the occurrence of hyperglycaemia above 10 mmol/l (180 mg/dl) was consistently and independently associated with a significant increase in both deep sternal wound infections and mortality.26–28

Likewise, the occurrence of hypoglycaemia represents an independent factor of mortality in critically ill patients.29–33 In contrast to former beliefs, even mild hypoglycaemia, defined as a BG <4 mmol/l (80 mg/dl) was 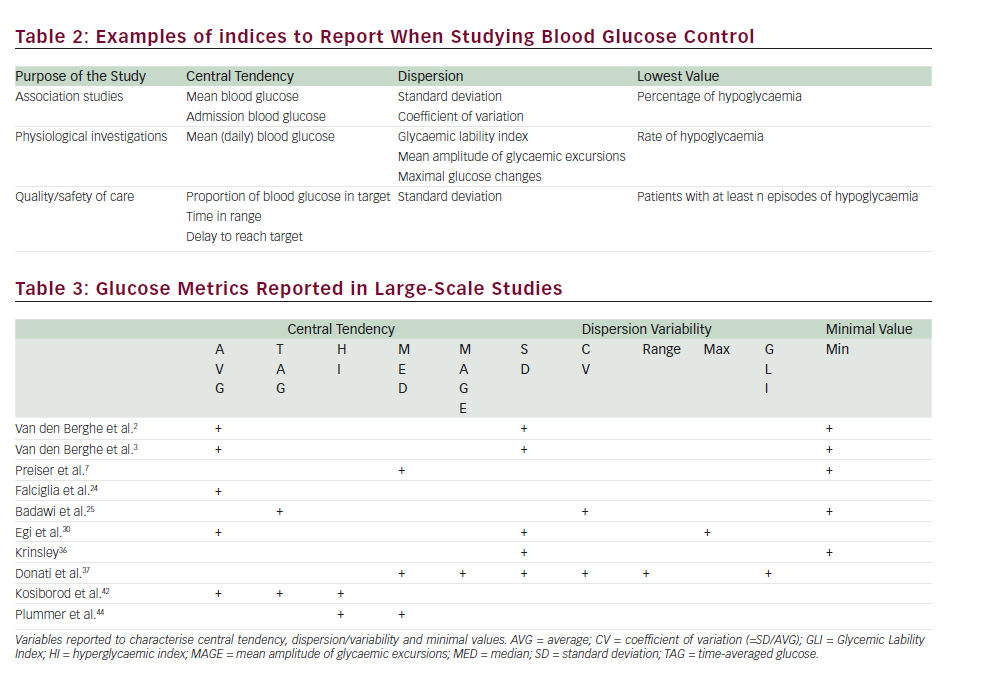 Comparing the relationship between dysglycaemia and outcome in critically ill patients with and without diabetes yielded interesting and consistent differences. Several studies consistently reported a flatter relationship or J-shaped curve between BG and mortality in diabetic than in non-diabetic patients.39–44 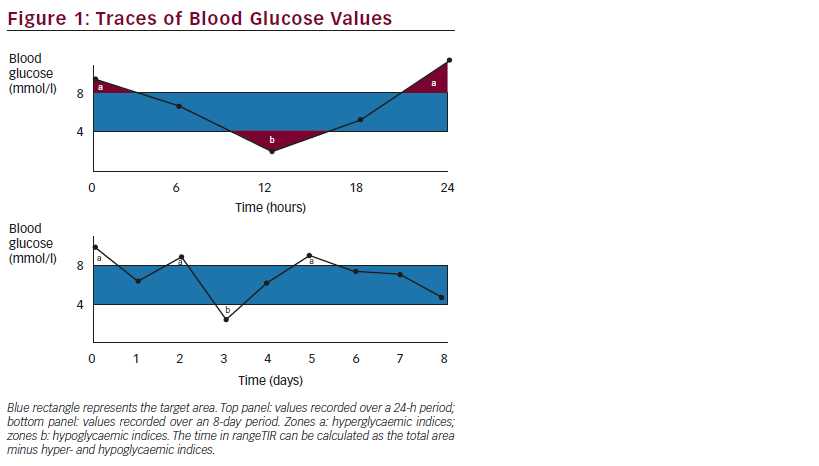 In the largest of these trials, the NICE-SUGAR study,8 IIT was associated with an increase in 90-day mortality, while in the other confirmatory trials, no difference in the outcome of the two groups was found. As expected, IIT was associated with a four- to sixfold increase in the incidence of hypoglycaemia (reported in 5–25 % of the patients randomised to IIT). This high incidence of hypoglycaemia represents the major concern when starting IIT.

Based on these observational and interventional data, the current guidelines from various scientific bodies consistently recommend maintaining the BG below 10 mmol/l (180 mg/dl), to prevent hypoglycaemia, even moderate, and to minimise GV.45–47

Challenges for the Future

In 2015, several factors in the field of glucose control have been clarified, whereas others are still unsolved. Among the points agreed by the community of intensivists, the concept of three domains of dysglycaemia has been widely accepted. However, a universal agreement of the definitions used to characterise the three domains is still lacking. Examples of indices are shown in Table 2, and variables reported by some studies are listed in Table 3. A recent consensus from a board of experts recommended that any study in the field should at least report one index of central tendency and dispersion and minimal BG value.48 In practical terms, the performance of any ICU and/or of any change in the therapeutic strategy (new algorithm, new meter, and new target) should be assessed in respect to these three domains. The metrics used can differ according to the purpose of the report (see Table 2).

Time in range (TIR) can be considered as a unifying metrics.39,49–51 It can be calculated either on a daily basis or for the entire length of stay (see Figure 1). This index summarises the proportion of time spent within the target range and can be calculated from intermittent or continuous BG values; however, using intermittent data implies a linear interpolation of values between two successive readings. The relevance of TIR has been confirmed in association studies on large cohorts of patients, where a higher TIR was associated with a better vital outcome.39,51

The use of a common language will probably improve the relevance of future clinical trials designed to address unsolved matters, including the most appropriate BG target according to the category of admission, the time interval from the initial injury and the medical history. For instance, a patient with poorly equilibrated type 2 diabetes could tolerate higher BG than a non-diabetic patient. Likewise, the achievement of a low BG value could be more risky in a brain-injured patient than in other categories, owing to the detrimental effects of hypoglycaemia in case of brain injury. The amount and type of nutrition can also influence the optimal BG target. A meta-analysis of the seven large-scale prospective trials on TGC by IIT revealed that among various possible factors, only the delivery of a high (>80 %) proportion of calories by the parenteral route was associated with an improvement in hospital mortality of patients randomised to IIT.9

A consistent, clear association between dysglycaemia and poor outcome is present in critically ill patients. These findings support the current recommendation of liberal glucose control by insulin, i.e. in view of the risks associated with tighter therapeutic strategies. The use of consistent indices of the three domains of dysglycaemia is required to delineate the optimal BG target in different categories of patients and the logistical requirements for a safe and reliable glucose control and to assess technical advances that could improve the quality and safety of glucose control.

Rafael Machado Tironi and Jean-Charles Preiser have no conflicts of interest to declare. No funding was received for the publication of this article.

This article is published under the Creative Commons Attribution Noncommercial License, which permits any non-commercial use, distribution, adaptation
and reproduction provided the original author(s) and source are given appropriate credit.

touchREVIEWS in Endocrinology. 2021;1(1):Online ahead of journal publication

touchREVIEWS in Endocrinology. 2021;17(1):Online ahead of journal publication

touchREVIEWS in Endocrinology. 2021;1(1):Online ahead of journal publication

Diabetes mellitus is a chronic disease that affects many people around the world. Sedentary lifestyle is considered a main risk factor for type 2 diabetes mellitus (T2DM). As presented in this editorial, the advantages of activity in preventing and treating T2DM are widely recognized. Exercise training improves glycaemic control, body composition, cardiorespiratory wellness, physical functioning […]