Gender inequality is a highly discussed and topical issue throughout the world at present. Women in developing countries are particularly vulnerable to gender discrimination, especially women living with chronic illness. This commentary piece discusses the discriminaton issues faced by women with type 1 diabetes in the developing world as they try to conform to the gender roles expected of them whilst managing their diabetes, and changes that could be made in the future.

Diabetes, with its ever growing prevalence, becomes a two-front struggle for young females living with it in developing countries. Firstly, they are already subjected to discrimination and social pressures because of the gender they were born with. Furthermore, thanks to the inconsiderate prevention messages, awareness campaigns about diabetes-related complications, judgmental attitudes of healthcare professionals, and plenty of bad management examples, diabetes is a constant source of discrimination for women living with it in the developing world – being a woman and having diabetes means double trouble!

There are certain stereotypes that women have to face throughout their lifetime. Within certain cultures there are roles a woman is expected to fit into, such as looking after household work, bearing and raising children, and looking a certain way. All of these gendered roles are continuous (all day, every day of the year) and require a lot of time.

It is pertinent to mention here that men also have to live with stereotype roles attached to their gender, and therefore have different issues to contend with. Women, however, who have traditionally been seen as the weaker gender and being more controlled by the opinions and decisions of the male leadership, be it with family, organization, or society in general, have lesser chances of rising above their circumstances and bringing about a positive change in their lives.

As various reports on the issue state,1–4 the two most important stereotypes creating gender inequality are: a boy is economically more useful than a girl; and a girl is for getting married and raising a family. This means that if a choice has to be made between sending a boy or a girl to school, the boy will be given precedence. This also means that boys usually receive more and better quality food than girls, and that girls without family stability are vulnerable to exploitation. Amongst this vulnerable group of girls, 1 in 10 lives with diabetes.

Statistics in the International Diabetes Federation (IDF) Atlas 20175 show that the mean annual healthcare expenditure per person with diabetes is high, even in countries with a majority of population living below poverty line, such as Congo, India, Bangladesh, Pakistan, and many others. Some data collected by T1international6 shows that in India, insulin and supplies for managing type 1 diabetes cost USD 1,342 annually, whereas the average annual income is only USD 1,693. Similarly, in Pakistan, estimates made on basal bolus regimen and twice-a-day testing show that insulin and supplies cost USD 1,356 annually whereas the average annual income is USD 1,629,7 which is approximately 83% of the average total annual income! Recent surveys, however, indicate a much lesser income percentage, based on the data collected. However, it is very apparent that most people in Pakistan still use pre-mixed or short/intermediate acting insulins as there are no records collected for rapid acting and long acting insulins.6,8 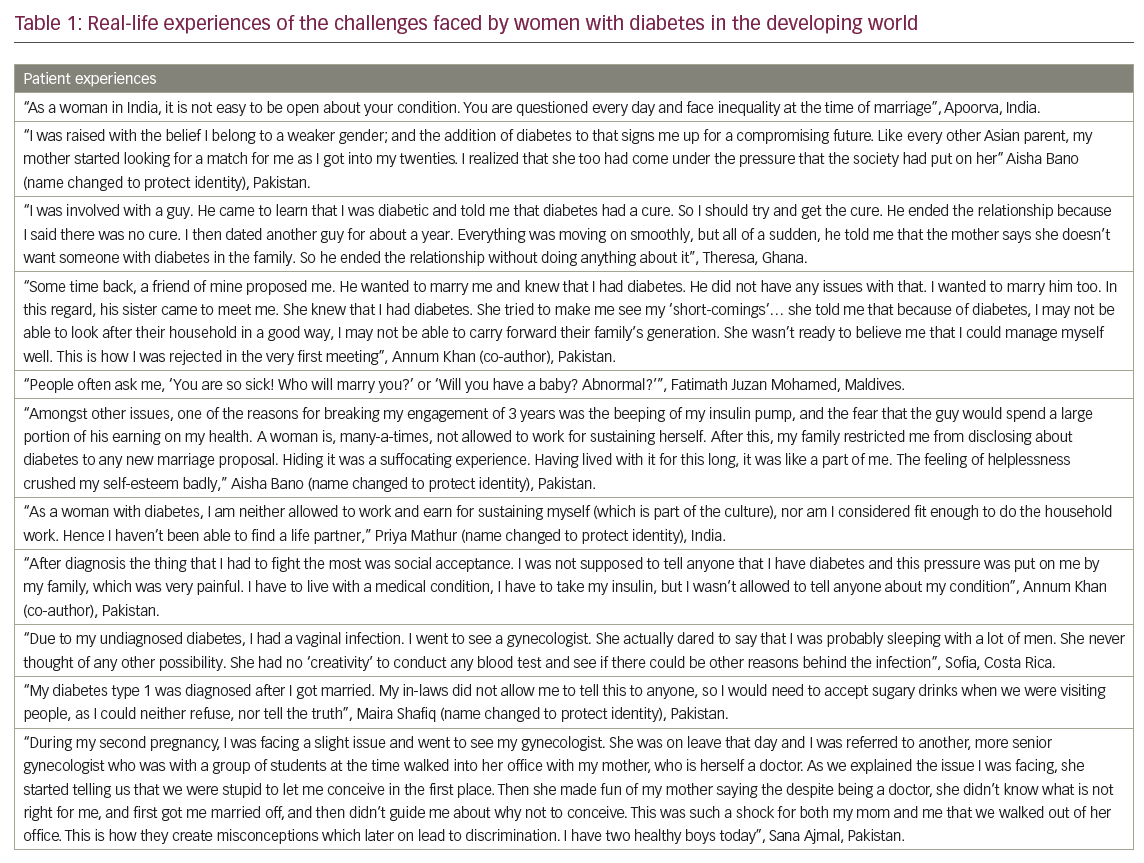 In a culture where, without any viable economic benefit of spending on a young girl or woman with diabetes, the cost of a female child having diabetes can be seen as an additional burden on the family, while the available healthcare is insufficient, inadequate, and expensive. Diabetes education is also often unavailable. All these issues make it difficult for a young woman with diabetes to properly treat and manage her diabetes, creating many examples of bad health outcomes. These examples of poor health outcomes reinforce stereotypes, i.e., what good is a girl if she is not healthy enough to get married and raise a family? The quality of a woman is often seen to be lowered by the presence of diabetes,9 similar to how the quality of fruit is lowered if it gets a disease.

Aside from the expense, diabetes management takes a lot of time, as does the gendered role expected from a woman, and as such, how well each or both of these tasks is performed is likely to be affected. This means that a woman with diabetes is either unable to completely manage the expectations around her role as a woman or is unable to manage her health properly, which in term is likely to interfere with her role as a woman.

People in the developing world often raise their daughters with the sole purpose of marrying them off to eligible bachelors and raising families. For a woman who already has to meet these high expectations, she may inevitably find it hard to manage her health too. This interferes with her role of becoming a mother and taking care of the daily needs of a family, hence the understanding that “women with diabetes cannot have healthy children and they cannot take care of families”. But what is important here is the root cause of the mess – the high gendered expectations.

The consequences of the economic and social problems highlighted above are that many men and their families do not want to have a relationship with “diabetes-infested” young women. Often they do not have enough economic resources available to support a “damaged” life partner, and there is little social acceptance. There are many examples of young women who have lost their husbands due to the effects of diabetes during intimate relations. If a woman is married off by the family with their diabetes diagnosis being kept hidden, it is common for them to divorce once the husband finds out.

Meethi Zindagi is a community organization in Pakistan that aims to create awareness, encourage empowerment and educate people living with diabetes, advocating for their rights and supporting them medically as well as psychologically through the underlying principle of peer-support. Meethi Zindagi is also partnered with some international organizations (such as The Access Alliance, League of DiAthletes), advocating for people living with diabetes (for more information about Meethi Zindagi, please visit www.meethizindagi.org). As part of the study conducted by Meethi Zindagi in 2017, and presented at the IDF World Diabetes Congress 2017, we aimed to identify the various challenges faced by young women with diabetes due to discrimination.10 A number of participants from various developing countries were asked to share their stories. They were asked about how it is to live with two specifications in a patriarchal society: the specification of being a woman and the specification of having diabetes. Some of them are included in Table 1, with some of the identities hidden for anonymity.

Discrimination in the name of diabetes doesn’t stop here. It is even present amongst healthcare professionals themselves. For instance, it is a common belief in the developing world, even amongst a large number of gynecologists, that women with diabetes cannot have children.

In the developing world, many gynecologists are not confident to handle a type 1 pregnancy and refuse to take on such patients. If they do agree to treat a pregnant woman with type 1 diabetes often they do not allow the pregnant woman to go into normal labor. Also, managing blood sugar levels during pregnancy, which requires expert guidance, is often left completely to the pregnant woman with diabetes to manage. The concept of a team of healthcare experts managing a pregnant patient with type 1 diabetes is not widespread and as a result the management is left to the mother-to-be and her medical specialist, who may not be experienced in managing diabetes during pregnancy, and therefore unaware of the hormonal level changes that lead to swinging blood sugar levels.

A lot of work needs to be done towards combatting discrimination. Advocating for women with diabetes is the simplest and perhaps the most effective solution in the medium to long-term. Creating role models and showing the real faces of women with diabetes, who are successful in their gendered roles, or in professional roles, or have had successful pregnancies and healthy children, to the society at large could help clear many misconceptions. Apart from this, training for gynecologists to equip them with the knowledge and tools for handling pregnancies of women with diabetes is a must-address area. Most importantly, diabetes prevention campaigns that aim to scare the public by highlighting the effects of complications should be revisited. These campaigns are a big source of cementing the negative image around diabetes in the head of everyone, leading to negativity and discrimination. While prevention is a possibility and should be highlighted, the positive image of a good life with well-managed diabetes will help those who cannot prevent diabetes, experience positivity around themselves.

Sana Ajmal, Anum Anwar, and Annum
Khan have nothing to disclose in relation to this article.

This is a commentary article and as such
did not undergo the journal’s usual peer review process.

This article is published under the Creative
Commons Attribution Noncommercial License, which
permits any noncommercial use, distribution, adaptation,
and reproduction provided the original author(s) and
source are given appropriate credit. © The Author(s) 2018