Parathyroid cysts are extremely rare and are rarely associated with primary hyperparathyroidism (PHPT), which are difficult to localise, as they are 99mTc-sesta-methoxyisobutylisonitrile (sestaMIBI) negative. We report for the first time the utility of 18F-fluorocholinepositron emission tomography/computerised tomography (PC-PET/CT) in localising parathyroid cyst causing normocalcemic PHPT. A seventy-six-year-old lady with progressively worsening osteoporosis from 2014–2017 (in spite of annual zolendronic acid infusions, daily calcium and vitamin-D supplementation) with persistently normal serum calcium and vitamin D, but elevated parathyroid hormone, had normal sestaMIBI scans of the neck on multiple occasions. FC-PET/CT finally revealed soft tissue uptake, suggestive of right superior parathyroid adenoma/hyperplasia. Surgical removal of the culprit lesion resulted in resolution of hyperparathyroidism, histopathologic evaluation of which revealed a cystic lesion lined by chief cell variant parathyroid cells without any nuclear atypia, capsular or vascular invasion. FC-PET/ CT is useful in localising culprit parathyroid lesions, especially when they are sestaMIBI negative. PC-PET/CT is useful in localising parathyroid hyperplasia and ectopic parathyroids, which are frequently missed by sestaMIBI. There is an urgent need for comparative studies between sestaMIBI and FC-PET/CT in PHPT. We report for the first time the usefulness of FC-PET/CT in localising sestaMIBI-negative functional parathyroid cyst causing normocalcemic PHPT.

18F-fluorocholine-positron emission tomography/computerized tomography (FC-PET/CT) has traditionally been used for disease localisation and management in oncology (e.g. hepatocellular carcinoma and prostate cancer).1 Diagnosis of parathyroid adenomas incidentally picked up in patients with malignancy who underwent FC-PET/CT led to its evaluation in parathyroid imaging.2 A few recent reports have suggested the beneficial role of PC-PET/CT in localising culprit lesions (hyperfunctional parathyroids) in patients with primary hyperparathyroidism (PHPT) otherwise not localised with 99mTc-sesta-methoxyisobutylisonitrile (sestaMIBI) imaging and high-resolution neck ultrasonography.3 PC-PET/CT has been documented to be useful in localising parathyroid hyperplasia, and ectopic parathyroids, which are often missed by the more traditional reference test, sestaMIBI imaging.4 Parathyroid cysts are very rarely associated with PHPT, which are difficult to localize, as they are sestaMIBI negative.5 We report for the first time the utility of PC-PET/CT in localising parathyroid cyst causing normocalcemic PHPT in a postmenopausal lady with severe osteoporosis which was not responding to bisphosphonate therapy. 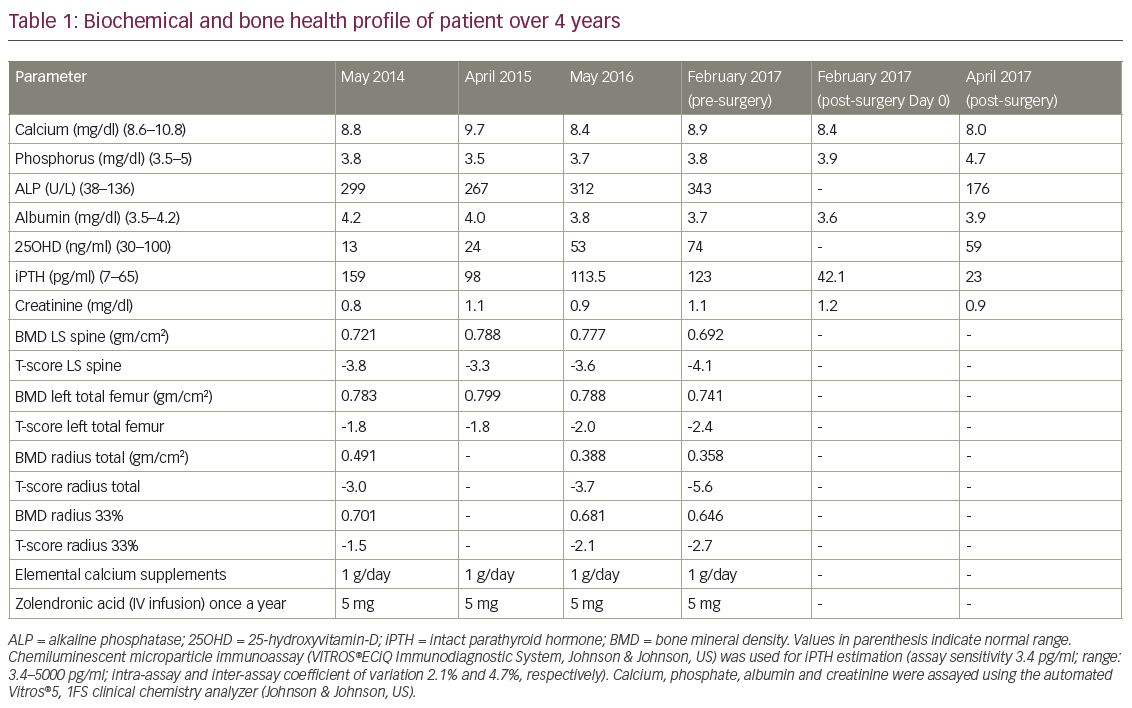 FC-PET/CT was done in May 2016 following injection of 5 mCi of 18F-fluorocholine by intravenous route. Computed tomography (CT) imaging was done from the orbits to the mid thorax region, revealed soft tissue uptake, posterior to the middle of the right lobe of the thyroid, extending superiorly for a cranio-caudal length of 1 cm, in close relation to the right lamina of the thyroid cartilage, 3 mm antero-medial to the right common carotid artery and 2 mm medial to the internal jugular vein, which was suggestive of right superior parathyroid adenoma/hyperplasia (Figure 1A–1C).

The patient was apprehensive about parathyroid surgery, leading to deferment of definitive surgical cure for primary hyperparathyroidism. However, with further worsening BMD in 2017, she finally agreed to neck surgery and underwent right superior parathyroidectomy, where a parathyroid cyst was removed. Her preoperative (on the day of surgery) and 20-minute post-parathyroidectomy iPTH were 123 and 42.1 pg/ml, respectively, indicating surgical cure of PHPT. Histopathology of surgical specimen revealed a cystic lesion lined by chief cell variant parathyroid cells without any nuclear atypia, capsular or vascular invasion (Figure 1D–1F). When last evaluated 2 months after the surgery, the patient was doing well, and was on calcium and cholecalciferol supplementation. 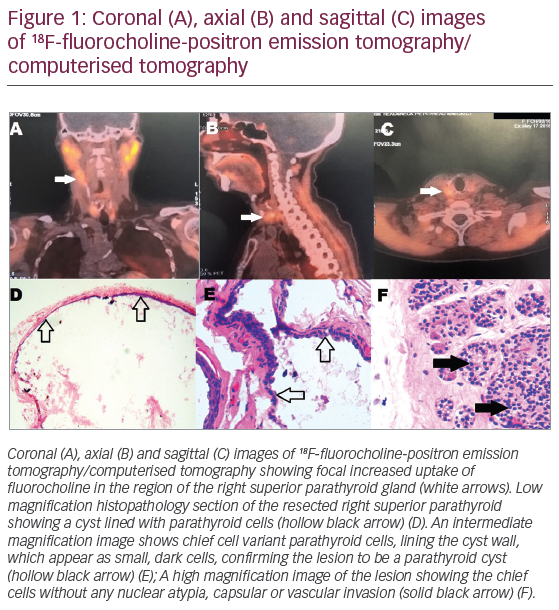 Failure to localise the culprit parathyroid, especially in the setting of normocalcemic hyperparathyroidism can lead to delay in the definitive surgical cure of the disease, which can lead to increased morbidity such as severe osteoporosis resistant to medical management,11 as was the case with our patient. Ultrasonography is a useful adjunct having 51–78% and 67–96% sensitivity and specificity, respectively, in localising parathyroid adenoma.7 However, its use is limited by inter-operator variability and it failed to localise the small parathyroid cyst in our patient. In sestaMIBI-negative primary hyperparathyroidism, if a suspicious lesion is seen on neck ultrasonography, fine-needle aspiration biopsy along with needle-tip parathyroid hormone greater than serum parathyroid hormone is a useful test in localising the culprit parathyroid.7,12

Deep Dutta, Pradeep Kumar Gupta,
Meha Sharma, Nishikant Avinash Damble,
Renu Madan and Shruti Dogra have nothing
to declare in relation to this article.
Compliance with Ethics: All procedures were followed
in accordance with the responsible committee on human
experimentation and with the Helsinki Declaration of
1975 and subsequent revisions, and informed consent
was received from the patient involved in this case study.

This article is published under the
Creative Commons Attribution Noncommercial License,
which permits any non-commercial use, distribution,
adaptation and reproduction provided the original
author(s) and source are given appropriate credit.