Background and aims: The impact of altered cholesterol metabolism on post-prandial lipids in Indians with hypothyroidism is not known. This study evaluated the impact of overt primary hypothyroidism (OPH) and subclinical hypothyroidism (ScH) on post-prandial lipids after a standardised, carbohydrate-rich, mixed meal. Methods: Endocrinology outpatients were screened for possible inclusion into the study. Patients >18 years of age with hypothyroidism who were not taking levothyroxine and who did not present with any comorbidities underwent biochemical evaluation following a carbohydrate-rich, mixed meal. Assessments included total cholesterol (TC), low-density lipoprotein cholesterol (LDL-C), high-density lipoprotein-cholesterol (HDL-C), triglycerides, lipoprotein-A (Lp-A), apolipoprotein-A1 (apo-A1), apolipoprotein-B (apo-B), insulin and fasting glucose. Assessments were carried out 1 hour, 2 hours and 4 hours after the meal. Patients were compared against healthy matched controls recruited from healthcare professionals in the hospital (asymptomatic and apparently healthy nursing staff, reception staff and ward staff). Results: Data from 194 patients (161 with ScH and 33 with OPH) and 40 euthyroid controls were analysed. Anthropometry, body mass index, glycaemia and insulin resistance were comparable among patients with OPH and ScH, and controls. LDL-C and Lp-A were significantly higher in those with OPH, compared with ScH and controls, at baseline, 1 hour, 2 hours and 4 hours after mixed meal consumption (all p<0.05). There was progressive and similar decline in post-prandial TC, LDL-C and Lp-A in all three groups. Triglycerides were similar among the OPH, ScH and control groups, both in fasting and post-prandial state, with a progressive and similar increase in post-prandial triglycerides in all three groups. Conclusion: This study demonstrated that severity of hypothyroidism had no impact on post-prandial TC, LDL-C and Lp-A. In addition, hypothyroidism had no impact on post-prandial triglycerides. Therefore, we conclude that lipid profile can be reliably estimated in a non-fasting state in individuals with ScH and OPH.

The estimation of lipid parameters has traditionally been carried out in the fasting state, without definitive evidence to suggest that this is superior to assessing them in the post-prandial period in terms of predicting metabolic outcomes and cardiovascular risk.1 Post-prandial lipoprotein metabolism is believed to play a role in the development of atherosclerosis.2 Post-prandial dyslipidaemia may be a better predictor of the metabolic status of an individual. In the Women’s Health Initiative study, 4-hour post-meal triglyceride was the best predictor of cardiovascular risk.3,4 Several other studies have also documented non-fasting triglycerides to be a reliable predictor of cardiovascular risk.5 As a result, many national and international clinical guidelines, including those from Denmark, the United Kingdom, Europe and Canada, have recommended non-fasting lipid testing in the primary prevention setting.5

Inclusion criteria for this study were age >18 years, a diagnosis with hypothyroidism but not receiving levothyroxine therapy, and current attendance at the outpatient department services of the department of endocrinology of the Dr Ram Manohar Lohia (RML) Hospital. Patients were excluded if they were pregnant; if they had diabetes, chronic kidney disease, liver disease, cardiac disease, heart failure, malignancy, epilepsy, tuberculosis, or an immunodeficiency; if they were taking medications that might impact thyroid hormones; or, if they had any co-existing conditions known to potentially impact lipid profile. Patients already taking lipid medications were also excluded. The study was approved by the institutional ethics committee. The study protocol was explained to the patients and only those who gave informed written consent were included. Forty age- and sex-matched healthy controls were recruited from nursing staff, reception staff and ward staff practicing at the hospital. Matched controls were apparently healthy, not on any medication, and had a normal thyroid profile on biochemical evaluation. Healthy matched controls gave informed written consent to participate in the study.

Participants attended the outpatient department at the hospital following a 12-hour fast. They underwent detailed clinical evaluation, along with measurement of anthropometric parameters. A blood sample was taking on arrival, as well as at 1 hour, 2 hours and 4 hours after a mixed meal. The blood sample was analysed for estimation of blood glucose, insulin, extended serum lipid profile (TC, LDL-C, HDL-C, triglycerides, Lp-A, apo-A1 and apo-B). Participants were then given a mixed breakfast of 576 kcal in the form of biscuits (Good Day® Butter biscuits, Britannia™, Bangalore, India; 81 g weight, 398 kcal) and a sweetened milk beverage (Kool Elaichi drink®, Amul, Anand, Gujarat, India; 200 mL, 178 kcal). Carbohydrates, proteins and fat constituted 79.1%, 7.7% and 13.2% of the meal, respectively.1

Normality of the distribution of variables was checked using the Kolmogrov–Smirnov test. Continuous variables were expressed as a mean ± standard deviation. A p value of <0.05 was considered to be statistically significant. Analysis of variance (ANOVA) with post hoc analyses and Kruskal–Wallis nonparametric ANOVA with Dunn’s post-correction were performed for normally and non-normally distributed variables, respectively. Chi‐squared tests were used for categorical variables. Pearson’s or Spearman’s correlation coefficient was calculated for normally and non-normally distributed variables, respectively. Version 16 of the Statistical Package for the Social Sciences (SPSS®, Chicago, IL, USA) was used for statistical analyses. 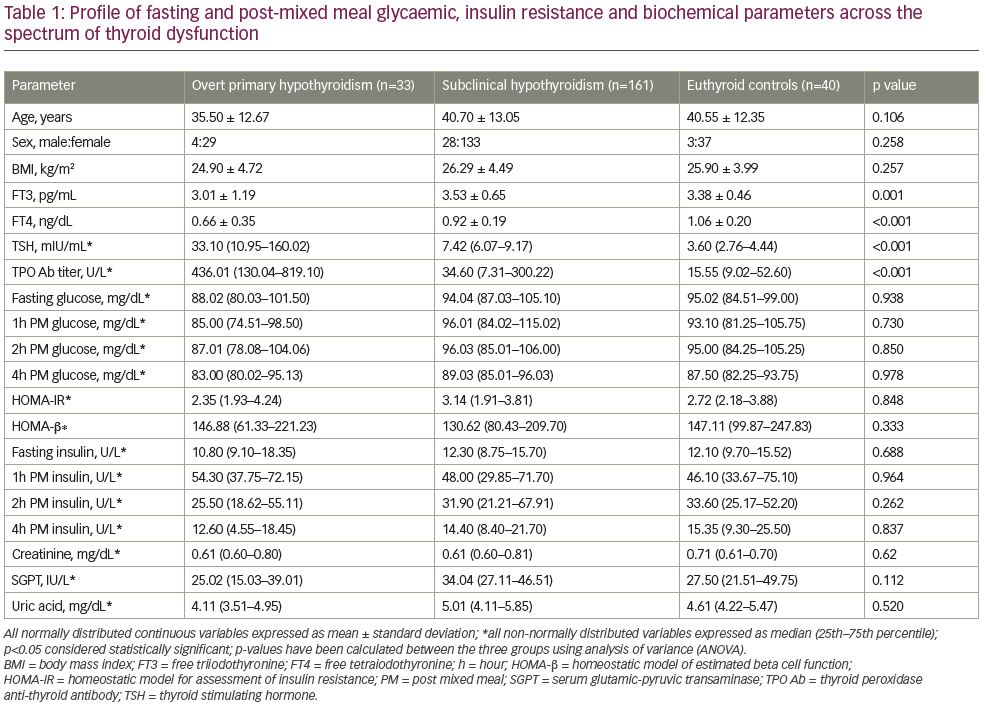 Serum triglycerides were similar in patients with OPH, ScH and controls, both in the fasting and post-prandial state (Table 2). There was a progressive increase in triglyceride levels in the post-prandial state from 1 hour to 4 hours in all three groups (Table 3). Hypertriglyceridaemia was defined as serum triglyceride >200 mg/dL.11 There was a similar increasing trend in the number of people with hypertriglyceridaemia at 1 hour, 2 hours and 4 hours after mixed meal in patients with OPH, ScH and controls (Table 4). Also, the quantum of increase in triglyceride levels (delta change) was similar in people with or without hypothyroidism (Table 3). 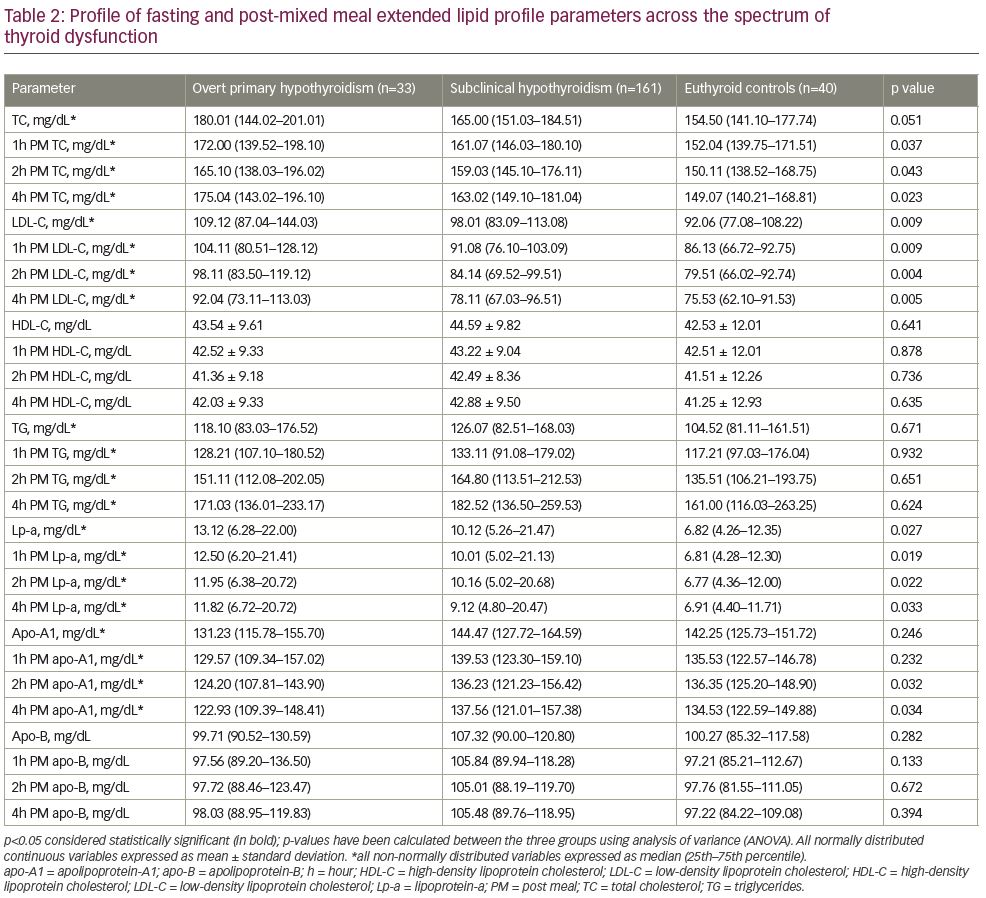 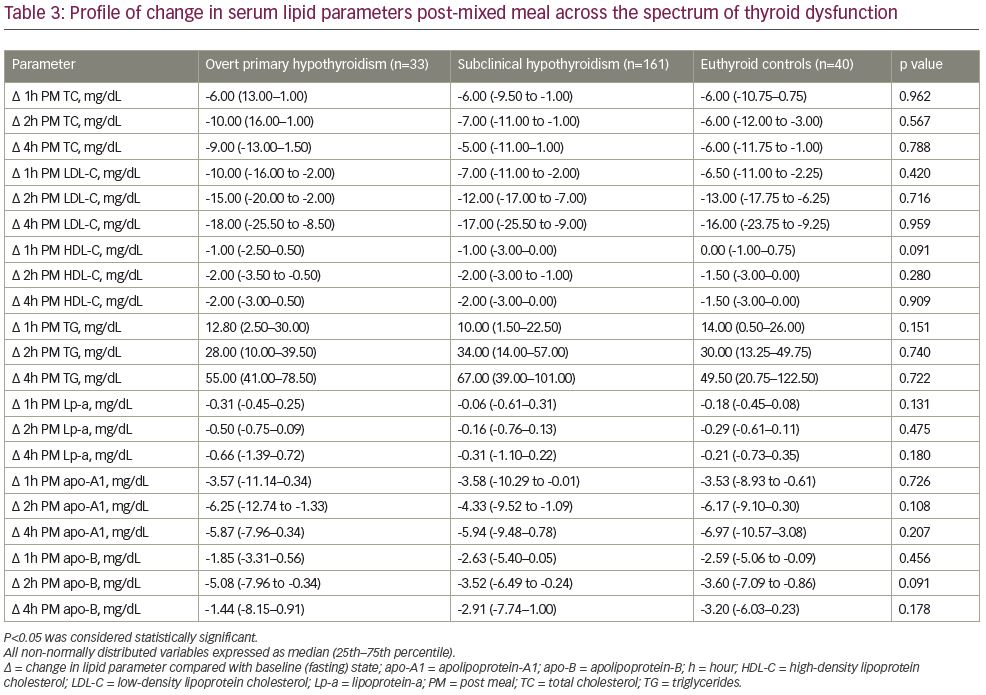 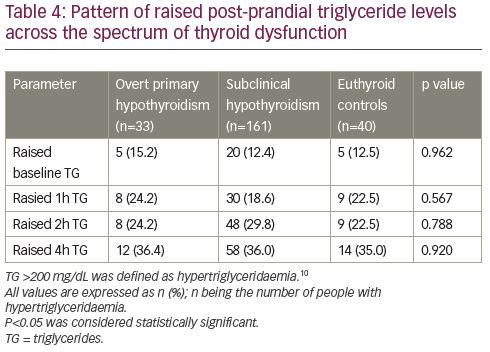 Apo-A1 levels were comparable in all the three groups (OPH, ScH and controls) when measured in the fasting state and in the 1-hour post-prandial state (Table 2). However, at 2 hours and 4 hours after mixed meal ingestion, serum apo-A1 levels were significantly lower in patients with OPH (Table 2). Serum apo-B levels were comparable in the fasting and post-prandial state in patients with OPH, patients with ScH and healthy controls. Thyroid-stimulating hormone had a statistically significant positive correlation with TC, LDL-C and apo-B (Table 5).
Free T4 had a statistically significant negative correlation with TC and apo-A1 (Table 5). 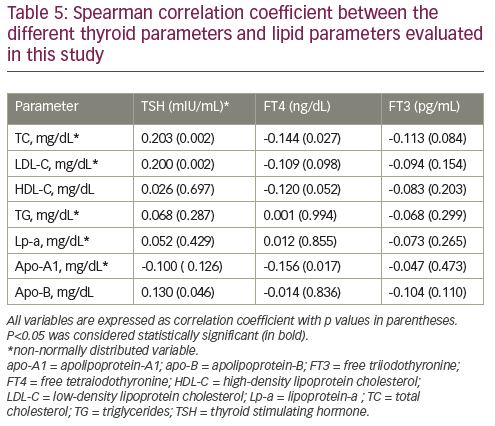 The cause for the increase in triglycerides, LDL-C and Lp-A in hypothyroidism is multifactorial and includes decreased LDL-R expression, increased hepatic expression of hydroxymethylglutaryl coenzyme A and increased cholesterol absorption from the gut.12 Both OPH and ScH are associated with varying degrees of hyperprolactinaemia, the correction of which is associated with reduction in cholesterol levels, insulin resistance and improvement in glycaemia.13–16 This underpins the use of dopamine agonist therapy in metabolic syndrome/type 2 diabetes.15,16

Studies have consistently shown that restoration of euthyroidism with levothyroxine supplementation is associated with reduction in levels of triglycerides, LDL-C and apo-B levels.17 Levothyroxine therapy has no impact on apo-A1 levels.17 Thus, irrespective of whether the lipid profile is tested in the fasting or non-fasting state, hypercholesterolemia medication should ideally only be commenced if hypercholesterolemia persists after the correction of hypothyroidism.

In a small study involving 25 patients with OPH, 27 patients with ScH and 23 controls, no significant differences in the fasting levels of TC, LDL-C, very low-density lipoprotein cholesterol [VLDL-c], triglycerides, insulin resistance (HOMA-IR) and estimated beta cell function (HOMA-β), were noted among the three groups; findings which are comparable to the observations noted in this study.18 However, the authors documented that the mean triglycerides and VLDL-C at 8-hours post-prandial was significantly higher in patients with OPH and ScH compared with controls.18 Post-prandial follow-up beyond 4 hours was not carried out in our study.

We have previously documented that non-fasting blood samples can be safely used for assessing lipid parameters in Indians with diabetes and normoglycaemia consuming a typical carbohydrate-rich Indian diet.1 Similarly, a study from Korea showed that a non-fasting lipid sample can be reliably used for assessing lipid parameters in patients with type 2 diabetes on statins consuming a typical Korean diet.21 A direct estimation of LDL should be completed for determining LDL-C levels, when a non-fasting sample is used for analysis, as the LDL-C values calculated using the Friedewald equation would not hold true in the setting of post-prandial hypertriglyceridaemia.22 McGowan et al. suggested that reduced cholesteryl-ester-transfer-protein activity may have a subtle impact on HDL-2 and HDL-3 subtypes of HDL cholesterol in patients with OPH.23

In a study from Greece, 6-month levothyroxine supplementation in patients with ScH did not result in any significant change in serum levels of TC, LDL-C, HDL-C, triglycerides, Apo-B, glucose, insulin, HOMA-IR, high sensitivity C-reactive protein, antithrombin-III, protein-C, protein-S, fibrinogen or homocysteine after restoration of euthyroidism.24 Very mild ScH may explain the lack of changes in serum levels of TC, LDL-C and apo-B in the previous study, whose levels are typically increased in OPH and ScH and usually normalise following restoration of euthyroidism, unless there are other associated factors contributing to dyslipidaemia, such as significant insulin resistance and metabolic syndrome.25 Levothyroxine therapy has also been shown to reduce serum levels of apo-B-48 in both OPH and ScH following restoration of euthyroidism.25 Apo-B-48 is a constituent of chylomicrons and chylomicron remnants and is believed to contribute to atherosclerosis.26 Apo-B-48 levels were, however, not evaluated in our study.

Limitations of this study include the fact that prolactin levels were not evaluated. Additionally, this study did not go into the mechanistic reason for the pattern of dyslipidaemia seen in hypothyroidism. Lack of availability of follow-up data evaluating the impact of correction of hypothyroidism on the different lipid parameters is also a limitation.

Lokesh Kumar Sharma, Neera Sharma, Bindu Kulshreshtha, Rahul Bansal, Anshita Aggarwal and Deep Dutta have no financial or non-financial relationships or activities to declare in relation to this article. Deep Dutta is is a member of the journal’s Editorial Board.

All procedures were followed in accordance with the responsible committee on human experimentation and with the Helsinki Declaration of 1975 and subsequent revisions. Informed consent was received from the patients involved in this study.

All named authors meet the criteria of the International Committee of Medical Journal Editors (ICMJE) for authorship for this manuscript, take responsibility for the integrity of the work as a whole and have given final approval for the version to be published.