A 50-year-old male presented to us complaining of dull-aching, left-sided abdominal pain with a lump at the same site, which he had noticed over the last 6 months. He also gave a history of occasional episodes of vomiting associated with poor appetite and a significant loss of weight. He did not give any history of change in bowel or bladder habits, jaundice, or fever. He had never been hospitalised previously and did not report any chronic medical conditions. He was a chronic smoker (60 pack-years) and did not have any other addictions.

On examination, the patient had a lean build, with a large, irregular abdominal mass palpable in the left lumbar and iliac regions, which was hard in consistency. He had hypotension (blood pressure 90/60 mmHg), and did not have any stigmata of Cushing’s syndrome. Routine investigations revealed iron-deficiency anaemia, hypoproteinaemia (total serum protein and albumin were 6.3 mg/dL and 2.8 mg/dL, respectively), hyponatraemia (serum sodium 124 mEq/L), hyperkalaemia (serum potassium 6.2 mEq/L), and transaminitis (aspartate aminotransferase and alanine aminotransferase: 1,030 and 23 IU/L, respectively). An ultrasound of the abdomen showed bilateral suprarenal masses, and contrast-enhanced computerised tomography (CT) was then carried out for further characterisation of the masses. It revealed ill-defined, heterogeneous, mildly enhancing, solid, soft-tissue attenuation masses in bilateral suprarenal location (17.0 x 19.8 x 13.2 cm); bilateral adrenal glands were not visible separately (Figure 1). The mass was invading the right lobe of the liver and the intrahepatic inferior vena cava. It was also displacing the stomach, pancreas and spleen, with loss of fat planes, and was causing encasement of the splenic vein, aorta, celiac axis and bilateral main renal arteries. Multiple necrotic, retroperitoneal lymph nodes in aortocaval, pre-aortic and left para-aortic locations were also seen. A large, irregular, soft-tissue attenuation mass (4 cm) was seen within the superior segment of the left lower lobe of the lung (Figure 2), with smaller nodules in the right upper and middle lobes. There was also an anterior wedge collapse of the L2 vertebral body. 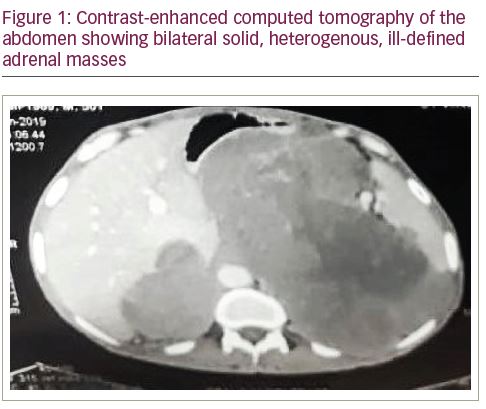 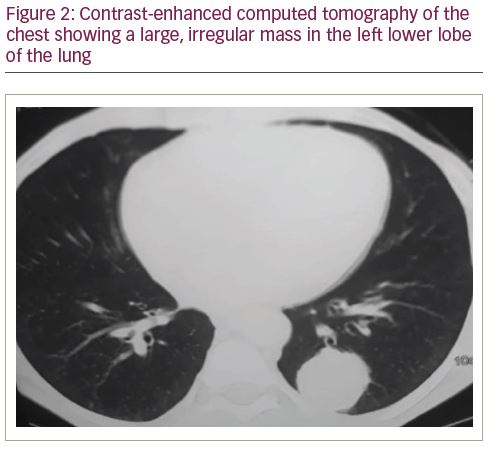 A possibility of malignancy with disseminated metastases, including bilateral adrenal metastases, was considered. Owing to the rarity of bilateral ACC, and keeping the possibility of bilateral adrenal metastases in mind, an ultrasound-guided biopsy was carried out from the left-sided adrenal mass, before which, a complete endocrine work-up was performed. Basal cortisol (8 am) was 331 nmol/L, and after adrenocorticotropic hormone (ACTH) stimulation with 250 µg synacthen, the peak cortisol value was 509 nmol/L (increment of 178 nmol/L), suggestive of relative adrenal insufficiency in the setting of a critical illness.1 Dehydroepiandrosterone sulfate level was 1.2 µg/L (normal range: 0.4–4.6 µg/L). The rest of the hormonal work-up (thyroid function test, gonadotropins, prolactin) was normal. Histopathological findings were suggestive of ACC, and the immunohistochemistry was also positive for adrenal cortical specific markers (calretinin, inhibin and melan A), and was negative for chromogranin (Figures 3 and 4). The patient was initiated on glucocorticoid and mineralocorticoid replacement, following which, he had a transient improvement in blood pressure and was scheduled for bilateral adrenalectomy. However, he succumbed to his illness before he could be taken up for surgery. 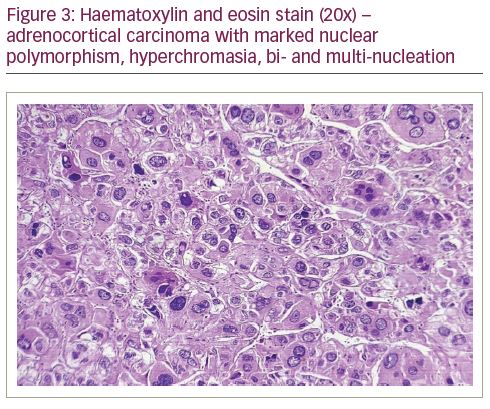 We described a case of adrenal insufficiency due to bilateral adrenal masses, which on evaluation was found to be due to ACC. Primary malignant tumours originating from the adrenal gland include ACCs, primary adrenal lymphomas and malignant pheochromocytomas. The common differential diagnoses for bilateral adrenal masses include infective aetiologies, such as tuberculosis and histoplasmosis; infiltrative disorders, such amyloidosis, metastasis from an unknown primary, non-Hodgkin’s lymphoma; bilateral pheochromocytoma; and congenital adrenal hyperplasia.2,3 The presentation of ACC as bilateral adrenal masses is quite uncommon (seen in 2–10% of cases of ACC), especially because ACC itself is a rare neoplasm with an annual incidence of 0.7–2.0 cases/million.4 It has a bimodal age distribution, with one peak in children younger than 5 years and another peak between the ages of 30 and 50 years.5 Forty to sixty percent of ACCs are secretory, while the rest are non-secretory.6 The presentation of bilateral ACC as adrenal insufficiency is even rarer. To the best of our knowledge, this is the third case ever reported of bilateral ACC with adrenal insufficiency.7,8 In one of the previously reported cases, bilateral ACC co-existed with pulmonary tuberculosis, which itself is known to cause adrenal insufficiency.7

The diagnosis of acute adrenal insufficiency in critically ill patients, as in the index case, deserves special mention as it has always remained a matter of debate. Though consensus is lacking, a recent review has shown that in the background of hypotension, suggesting critical illness with a serum albumin of >2.5 mg/dL, a baseline serum cortisol level <400 nmol/L (15 µg/dL) itself suggests cortisol insufficiency, as was seen in the index case.9 Studies have also shown that a delta rise (difference between stimulated and basal values) in cortisol after ACTH stimulation test of <9 µg/dL (<250 nmol/L) in critically ill patients is a poor prognostic marker and is associated with increased mortality.1 Further, there is also controversy regarding the 1 versus 250 µg synacthen dose used in ACTH stimulation tests to detect adrenal insufficiency in critically ill patients.1 As most critical care studies have reported the use of a 250 µg dose, it is advisable to use the same.9

There is no evidence to suggest whether the contralateral gland is involved in cases of bilateral ACC, or is involved due to metastases from the other gland. The rarity of bilateral ACC, coupled with the fact that bilateral adrenal masses in sick patients are more commonly due to metastases or infections, can mean that bilateral ACC may be missed. The presence of a known primary malignancy almost always means that bilateral adrenal masses are metastatic in origin. However, in the absence of a known primary, clinical clues may not offer much help. The radiological features of ACC and metastases are also very similar, with the radiodensity on unenhanced CT being >10 Hounsfield units with a post-contrast washout of <50%, in both cases. An 18F-fluorodeoxyglucose positron emission tomography scan cannot differentiate adrenal metastases from ACC, except if there is significant uptake (as seen by the standardised uptake value max) in the primary extra-adrenal lesion, in the case of adrenal metastases. CT-guided fine-needle aspiration is recommended in the case of suspected adrenal metastases, while on the contrary, it is to be avoided in ACC, as it increases the risk of widespread dissemination.

In the index patient, because of the bilateral nature of the disease, the degree of suspicion for ACC was low, hence we proceeded with adrenal biopsy. However, the histopathological findings were suggestive of ACC. Genetic analysis could not be done. A previous case report of a patient with bilateral ACC demonstrated allelic losses of the p53 and RB genes in both adrenal tumours.10 The treatment of ACC versus metastatic adrenal masses is diametrically different. While metastatic disease necessitates treatment for the underlying primary malignancy, the treatment of bilateral ACC encompasses bilateral adrenal gland removal with lifelong glucocorticoid and mineralocorticoid replacement. The further course of treatment is dependent on the European Network for the Study of Adrenal Tumor (ENSAT) staging of the tumour.11

To conclude, our case represents a rare presentation of ACC and we suggest that ACC should be considered in the differential diagnoses of bilateral adrenal masses with acute adrenal insufficiency.

Anshita Aggarwal, Aprajita Verma, Aparajita Roy and Bindu Kulshreshtha have no financial or non-financial relationships or activities to declare in relation to this article.

Informed consent was received from the patient involved in this case study; no identifying information or images have been included. 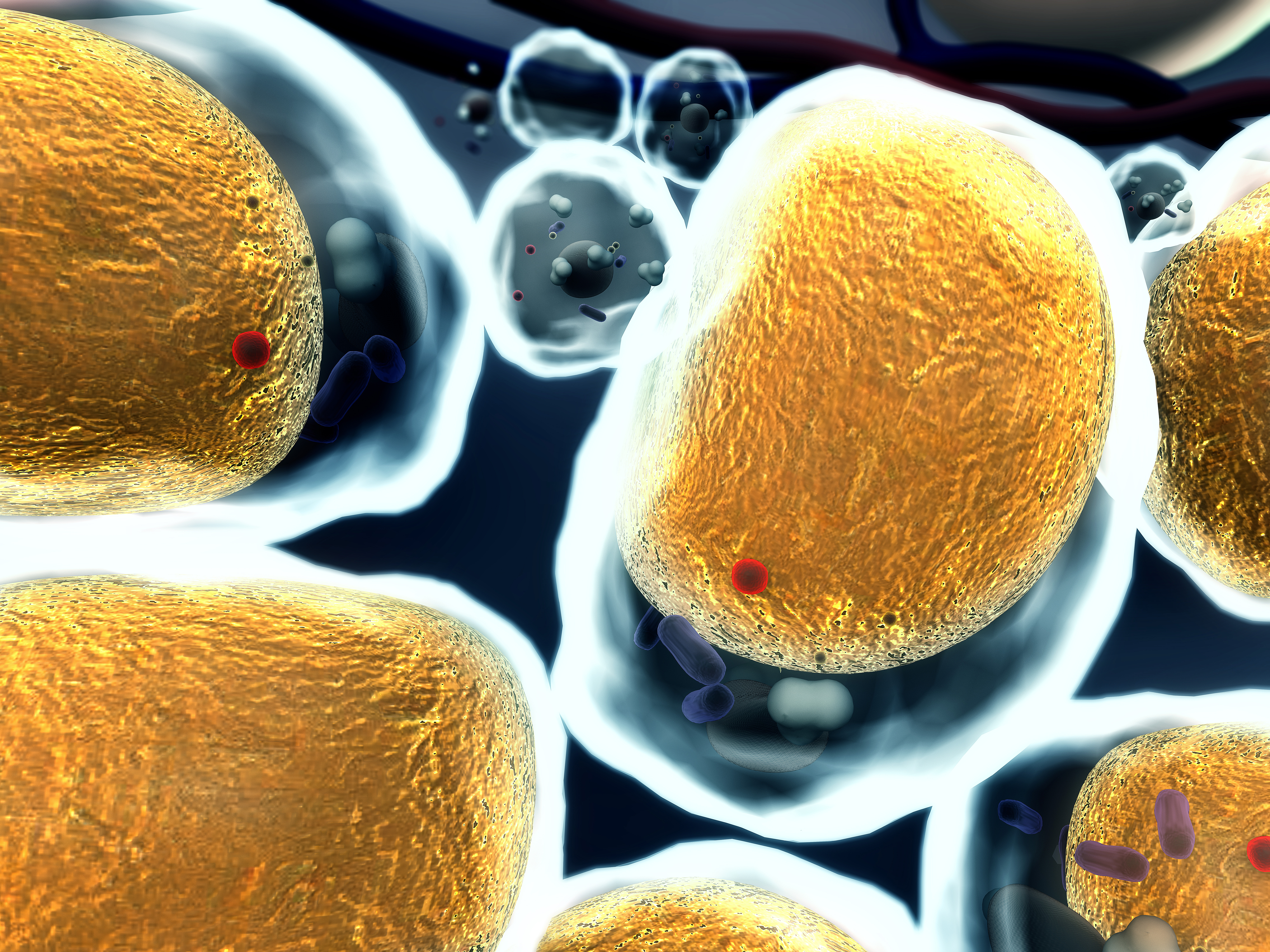 Immune checkpoints are small molecules that are present on the cell surface of T lymphocytes to regulate the immune response. While some of these molecules enhance the stimulatory signals, others boost the inhibitory signals to blunt the activity of T lymphocytes (intrinsic down-regulators of immunity).1 The stimulatory checkpoints include CD28 – a family of receptors […]