Co-occurrence of hyperinsulinaemic hypoglycaemia and polycystic kidney disease (HIPKD) has been recently described. It is caused by non-coding variant in the promoter region for PMM2, c.-167G>T, both in homozygous or compound heterozygous variants with deleterious coding. Although PMM2 has been associated with congenital disorder of glycosylation, patients do not present with this phenotype and have normal carbohydrate-deficient transferring testing. Authors present a rare case where specific PMM2 study was performed after clinical suspicious. The patient was a 6-year-old female followed at our clinic due to congenital hyperinsulinism since she was 1 month old. She also presented with bilateral polycystic kidneys, detected in prenatal set, and simple hepatic cysts, for which, she was treated with diazoxide and captopril. Initial metabolic and genetic studies were normal. PMM2 gene sequence study revealed the promotor variant c.-167G>T in compound heterozygosity with the previous described pathogenic variant c.422G>A (p.Arg141His), confirming the diagnosis of HIPKD. This is an important case as it highlights the importance of keeping this diagnostic hypothesis in mind and serves as a reminder to perform proper clinical and genetic investigation. A correct, and early, diagnosis will avoid unnecessary additional investigations and will allow appropriate genetic counselling for this autosomal recessive disorder.

Hyperinsulinaemic Hypoglycaemia (HH) is a very rare disease with an estimated incidence of 1/50,000,1 and includes a clinical, histological and genetic heterogeneous group of disorders characterised by hypoglycaemia, hyperinsulinism or, more specifically, increased C-peptide level and inappropriate low blood levels of ketone bodies during a hypoglycaemic event. HH is a variable condition: it can be transient or persistent; patients can present with mild symptoms or with very symptomatic hypoglycaemia with adrenergic symptoms or life-threatening neurologic symptoms; it can be congenital or secondary, mainly to overgrowth syndromes/metabolic disorders. Pancreatic lesions that can cause HH may be diffuse or focal. Both 18F-fluoro-dihydroxyphenylalanine (18F-DOPA) positron emission tomography (PET)/computed tomography (CT) and genetic study are essential diagnostic tools to differentiate these types, with important management implications. Until 2017, 12 genes were described in the literature associated with HH, but still 50% of cases remain without genetic confirmation.2 Management depends on both phenotype and genotype, but all require intravenous glucose at very high infusion rate (>8 mg/kg/min) at presentation. There are different approaches for management in the non-acute phase, such as increased glucose intake (oral or intravenous), dietary modifications, exercise eviction, pharmacological treatment (such as diazoxide, octreotide or lanreotide), hormone administration (such glucagon) or surgical treatment (excision of focal lesion or almost total pancreatectomy for diffuse lesion).

Polycystic kidney disease (PKD), mainly autosomal recessive type, is an hepatorenal fibrocystic disease,3 characterised by bilaterally enlarged, diffusely echogenic kidneys that can be found on prenatal ultrasound or after birth, and biliary ductal ectasia or signs of congenital hepatic fibrosis. It is usually more severe than autosomal dominant type and presents earlier in life. Biallelic pathogenic variants in PKHD1 gene are found in about 42–87% of patients.3 About 30% of these children die in the neonatal period or within the first year of life due to respiratory insufficiency consequent to oligohydramnios.4 Co-occurrence of both diseases (HIPKD) has been recently described by Cabezas et al., in a group of 17 patients from 11 families.5 It is caused by non-coding variant in the promoter region for PMM2, c.-167G>T, both in homozygous or compound heterozygous variants with deleterious coding.

Here we present a new case of this rare entity recently diagnosed in a central hospital from Portugal.

The patient was a 6-year-old female, second child of a healthy non-consanguineous couple, followed at our Paediatric Endocrinology outpatient clinic due to congenital hyperinsulinism since she was 1 month old. She was born after a well-monitored and uneventful pregnancy, without gestational diabetes, but with a prenatal diagnosis of bilateral renal hypertrophy. She was born by vaginal delivery at 36 weeks of gestation, with weight 3,860 g (Z-score 2.55 P99), length 47 cm (Z-score 0.21 P58) and head circumference 35 cm (Z-score 1.88 P97). She presented with palpable flank masses of hard consistency, without other manifestations on perinatal observation. At 20 hours of life, she presented with hypotonia and hypoglycaemia and was admitted to the neonatal intensive care unit (NICU) with severe hypoglycaemia (4 mg/dL), high insulin levels (19.2 μU/mL) and increased serum lactate (3.01 mmol/L). Lactate values were posteriorly normal. The last one was normal on the following measurements. At NICU, she developed hypertension at 7 days old and had persistent tendency to hypoglycaemia despite progressive increase in glucose rate (maximum of 17.6 mg/kg/min IV and milk plus maltodextrin). She had feeding problems requiring a nasogastric tube feeding to complement breastfeeding. Initially she needed to be fed every 2 hours to reach a good metabolic control (blood glucose ≥60 mg/dL).

The child grew at normal rates for both weight and height and had neither dysmorphic nor neurologic features. Cognitive evaluation was performed at 55 months and revealed a normal developmental quotient (113 for Griffith Mental Development Scale).6

At the time of this case report, the child was 6 years and 5 months old, and is still on diazoxide treatment with normoglycaemia. Her blood sugars are well-controlled on diazoxide, as measured by continuous glucose monitoring. She has normal blood pressure on captopril treatment, with her last echocardiogram evaluation showing no structural cardiopathy and no left ventricular hypertrophy with a good ventricular function. Her last glomerular filtration rate was 70 mL/min/1.73 m2 and liver transaminases levels were normal (aspartate aminotransferase [AST] 31 UI/L and alanine aminotransferase [ALT] 18 UI/L). Her last abdominal and renal ultrasound still revealed enlarged kidneys (right kidney 111 mm and left kidney 117 mm, both >95 centile for age) with multiples small cysts and multiple hepatic cysts without liver enlargement.

Looking for the possible underlying cause of this phenotype, phosphomannomutase 2 (PMM2) gene sequence study was performed, specially searching for promotor variant c.-167G>T. This study revealed that our patient had both this pathogenic variant and the pathogenic variant c.422G>A (p.Arg141His) in compound heterozygosity. R141H (NM_000303.2: c.422G>A; NP_000294.1: p.Arg141His) is the most frequent mutation and was detected in 8 out of 1,000 in a default global population (1,000 genome phase 1 genotype data from 1,094 worldwide individuals).7 R141 is located in the active site of the enzyme where it is predicted to bind the phosphate group of the substrate, mannose-6-phosphate.7 Its mutation into histidine, which completely inactivates the enzyme, has never been observed in homozygosity possibly because the total absence of PMM2 is not compatible with life.8 This result confirmed the diagnosis of HIPKD.

In genetic consultation, parental carrier status was confirmed and appropriated genetic counselling was given to the family.

HIPKD is a rare disease and, as far as the authors know, there is only one original paper describing a group of patients that presented with this phenotype and in whom the causative variant was found through Whole Exome Sequencing WES in research set.5 HIPKD is caused by a non-coding variant in the promoter region for PMM2, c.-167G>T, both in homozygous or compound heterozygous variants with previously described deleterious coding.

PMM2 is a key enzyme in N-glycosylation, and recessive coding pathogenic variants in PMM2 cause a congenital disorder of glycosylation PMM2-CDG, formerly known as CDG type 1a. This is a multisystemic and variable disorder characterised mainly by cerebellar dysfunction, developmental delay, abnormal subcutaneous fat distribution and inverted nipples, strabismus and hypotonia, and other clinical manifestations. Transferrin isoelectric focusing study reveals an abnormal pattern type 1 and the diagnosis is confirmed by Sanger sequencing of PMM2 gene. For patients to present with PMM2-CDG type, two pathogenic coding variants should be found. However, patients described with HIPKD have this specific promotor variant in PMM2 and do not present multisystemic involvement of the disease, neither have abnormal transferrin isoelectric focusing.5

This is the first case where the recent knowledge from the Cabezas et al.5 was applied in the diagnostic work-up. Comparing with cases described by Cabezas et al., persistent hyperinsulinism needing diazoxide treatment was described in 9/17 (53%) patients; kidney anomalies were found previously in 17/17 (100%) and hepatic cystic disease was described in 6/17 (35%) patients. The molecular study in this case report confirmed the previously described variant associated with this phenotype.5 It is an autosomal recessive disorder, with 25% risk of recurrence for this child’s parents, and appropriate genetic counselling was performed.5

The authors wish to emphasise that it is essential to keep this diagnostic hypothesis in mind. If prenatal renal cysts are detected, it is important to measure blood glucose and insulin after birth; if a patient presents with persistent HH, performing a renal/abdominal ultrasound should be considered. If this clinical diagnosis is suspected, specific sequencing of PMM2 gene should be performed, with special attention to the promoter region. A correct and early diagnosis will avoid unnecessary additional investigations and will allow appropriate genetic counselling for this autosomal recessive disorder.

Chronic kidney disease (CKD) represents one of the greatest future public health challenges due, among other consequences, to its elevated burden on economic and human resources within healthcare systems.1 Moreover, the rapid growth of type 2 diabetes mellitus (T2DM) results in a high incidence of diabetic kidney disease (DKD), which, together with hypertension, is the main […] 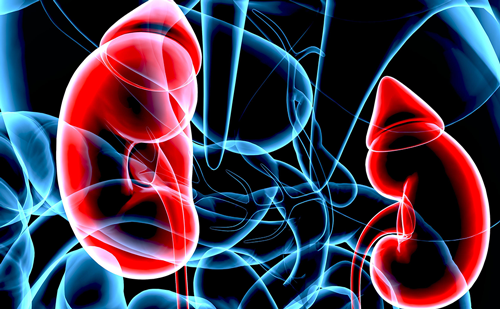 Hyperinsulinaemic Hypoglycaemia (HH) is a very rare disease with an estimated incidence of 1/50,000,1 and includes a clinical, histological and genetic heterogeneous group of disorders characterised by hypoglycaemia, hyperinsulinism or, more specifically, increased C-peptide level and inappropriate low blood levels of ketone bodies during a hypoglycaemic event. HH is a variable condition: it can be […]