We assessed real-time continuous glucose monitoring (rtCGM) data in an individual with type 2 diabetes who presented with severe symptoms of COVID-19, and suffered a fatal cardiac arrest during hospitalization. In this retrospective analysis, we used rtCGM to evaluate changes in blood glucose levels in a 71-year-old male with COVID-19 symptoms who suffered a fatal cardiac arrest. Blood glucose levels remained constant at 220–225 mg/dL after the first cardiac arrest, slowly decreased to 167 mg/dL after return of spontaneous circulation was achieved, and rose to 198 mg/dL prior to the second arrest. After the patient expired, glucose levels decreased to the 141 mg/dL over the first hour, but quickly declined to undetectable levels within the next 20 minutes. Wider adoption of rtCGM use in patients with COVID-19 may help identify blood glucose patterns and uncover new insights to various comorbidities and conditions.

Diabetes is one of the most common co-morbidities associated with hospitalizations for SARS-CoV-2 infection, with recent estimates of diabetes prevalence ranging from 33.8%1 to 58.0%2 among hospitalized patients with COVID-19 in the USA. Hyperglycemia during the first hours after cardiac arrest is associated with poorer outcomes.3 Previous studies have been unable to consistently examine blood glucose patterns during the immediate (20 minutes after resuscitation) phase of post-cardiac arrest,4 as glucose levels were typically recorded at the time of hospital admission, with great variability in time between resuscitation and measurement of glucose levels. Use of real-time continuous glucose monitoring (rtCGM) provides the ability to assess real-time changes in glucose levels throughout the cardiac arrest event.

We considered the implementation of rtCGM in an effort to minimize staff exposure, and to preserve personal protective equipment, as the number of COVID-19 cases and deaths were rapidly increasing in New York City and Long Island. This report presents rtCGM data and clinical interventions in an individual with type 2 diabetes who presented with severe symptoms of COVID-19, and suffered a fatal cardiac arrest during hospitalization.

In this retrospective analysis, we utilized rtCGM (Dexcom G6, Dexcom, Inc., San Diego, CA) to compare rtCGM with arterial and point-of-care (POC) blood glucose measurements in an effort to assess the clinical utility of using rtCGM to manage critically ill patients with diabetes and COVID-19. Of primary interest was the change in blood glucose levels in a 71-year-old male with a history of coronary artery disease, atrial fibrillation, chronic kidney disease, hypertension and dyslipidemia, who suffered cardiac arrest following admission to Stony Brook University Hospital, Stony Brook, NY. rtCGM glucose data were monitored using the device receiver, which was placed outside the patient’s room door to minimize staff exposure to the SARS-CoV-2 virus. rtCGM data were uploaded to the Dexcom Clarity software (Dexcom, Inc., San Diego, CA) for analysis.

On April 13, 2020, the patient was transferred from the Northport VA Medical Center to Stony Brook University Hospital due to concern for stroke. Upon arrival, the patient was tachypneic, with a respiratory rate up to 62 breaths per minute and an oxygen saturation of 94% on 4 L/minute of oxygen via nasal cannula, with a Glasgow Coma Scale score of 15. Vitals, laboratory values and arterial blood gas levels, are presented in Table 1. Head computed tomography (CT) without contrast was negative for acute cerebrovascular event, and chest CT showed bilateral multifocal pneumonia. An electrocardiogram showed atrial fibrillation with rapid ventricular response, but no ischemic changes. Of note, the patient had tested positive for COVID-19 at an outside hospital 9 days before admission, and finished a 5-day course of hydroxychloroquine 4 days before admission. 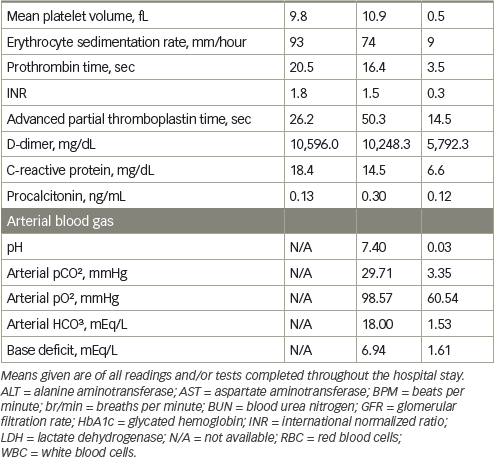 Shortly after admission, the patient’s arterial oxygen saturation dropped to 84% on 6 L/minute of oxygen delivered via nasal cannula. A non-rebreather mask was placed, but the patient remained hypoxic with an oxygen saturation of 90%. He was subsequently intubated and transferred to the medical intensive care unit.

On day 1 of hospitalization, the patient’s blood glucose ranged from 200 to 242 mg/dL while receiving a subcutaneous (SC) insulin regimen of 5 units of glargine and 4 units of lispro. On day 2, blood glucose briefly increased to 368 mg/dL, before decreasing to 130–160 mg/dL. He received 15 units of glargine and 9 units of lispro. By day 3 of hospitalization, the patient developed worsening hyperglycemia, with blood glucose levels up to 399 mg/dL and anion gap metabolic acidosis, and a respiratory rate of 26–28 breaths per minute. Beta-hydroxybutyrate was elevated at 0.82 mmol/L, with an anion gap of 23 mEq/dL and bicarbonate of 16 mEq/L. An intravenous (IV) insulin infusion was started on day 2 and maintained until day 5, with an average hourly insulin requirement of 3.5–5.7 units per hour. In addition, the patient had recently been started on IV methylprednisolone 40 mg every 12 hours. His baseline glycated hemoglobin (HbA1c) was 8.0% on a home insulin regimen of 5 units of insulin glargine SC at bedtime. Endocrinology was consulted and the rtCGM device was placed on day 3.

The patient was extubated on day 5. Throughout most of day 5, blood glucose levels remained elevated up to 250 mg/dL, and the patient was transitioned to 14 units of insulin glargine SC once daily. On day 6, the patient became increasingly dyspneic and hypoxic while on a non-rebreather mask and was placed on bi-level positive airway pressure (BiPAP). Troponin remained elevated at 0.34 mg/mL. Glucose increased to 235 mg/dL, and the insulin glargine dose was increased to 17 units SC daily.

The patient continued to desaturate on day 7 while on 100% fraction of inspired oxygen (FiO2) via BiPAP, so an emergency re-intubation was performed. The patient became hypotensive and bradycardic immediately post-intubation, despite three IV boluses of 100 µg of phenylephrine. A code blue was called at 4:08 am. The initial electrocardiogram waveform showed asystole, and subsequent waveforms showed ventricular fibrillation and pulseless electric activity (PEA). Return of spontaneous circulation (ROSC) was achieved at 4.22 am. Shortly after, IV infusions of phenylephrine and epinephrine were titrated to the maximum rates, yet hypotension persisted. Multiple IV boluses of phenylephrine, sodium bicarbonate and calcium gluconate were administered, but blood pressure continued to fall. A second code blue was called at 4.54 am. The initial cardiac rhythm was PEA, and did not change, despite epinephrine administration as per the Advanced Cardiovascular Life Support guidelines. The patient was pronounced dead at 4.58 am.

We observed significant reductions in hyperglycemia by days 5 and 6. rtCGM glucose values correlated well with arterial and POC glucose values, with similar trends in glycemic variability across all measuring modalities (Figure 1B). Daily means of rtCGM glucose measurements were within 20% of that of arterial glucose measurements for the entirety of the rtCGM utilization period. The percent difference between patient day–weighted mean glucose5 of rtCGM and arterial glucose was 6.7%
(Table 2). 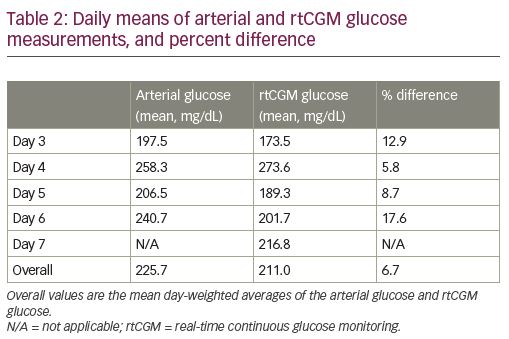 The utilization of rtCGM has been shown to significantly improve glycemic control in patients with type 1 and type 2 diabetes.6–9 Acute glycemic management may also play an important role in reducing viral load and infection duration in patients with diabetes and COVID-19, although further investigations are necessary.10 Bode et al. recently reported that patients with COVID-19, diabetes and/or uncontrolled hyperglycemia had a longer length of stay and significantly higher mortality than patients without diabetes or uncontrolled hyperglycemia.11 Chow et al. demonstrated that in their cohort, utilization of rtCGM led to improvements in mean sensor glucose in 77% of critically ill patients with COVID-19.12 We demonstrated how rtCGM was utilized to manage diabetes in an elderly male with severe COVID-19, and gain insight into glucose metabolism during cardiac arrest, resuscitation, and death. We observed significant reductions in hyperglycemia by days 5 and 6. rtCGM glucose values correlated well with arterial and POC glucose values, with similar trends in glycemic variability across all measuring modalities (Figure 1B).

Importantly, the use of rtCGM instead of traditional POC blood glucose monitoring conferred an added level of safety for staff, as the number of COVID-19 cases was rapidly increasing in New York City and Long Island. By placing the rtCGM receiver outside patients’ doors, staff were able to more closely monitor glycemic control while both reducing their exposure to infection, and minimizing utilization of personal protective equipment, as nurses only needed to enter patient rooms to address non-diabetes issues.

To our knowledge, this is the first case in which rtCGM was used to capture real-time glucose values during episodes of cardiac arrest, ROSC, and subsequent death. The utilization of rtCGM during cardiac arrest and death demonstrated how rtCGM can be feasibly implemented to study glucose metabolism in various clinical settings. Further understanding of changes in glycemic variability in patients post-cardiac arrest is necessary as we continue to refine treatment guidelines to improve clinical outcomes and survival. This case presents a strong argument for the implementation and usage of rtCGM systems in the critical care setting. Not only does rtCGM provide continuous and dynamic glucose measurements in individual patients, but it may also help identify blood glucose patterns, and provide new insights to various comorbidities and conditions. Although not conclusive, the rtCGM glucose patterns described in this case suggest that factors other than dysglycemia contributed to the patient’s cardiac arrest. Utilization of rtCGM could also reveal insights in glucose variability during the immediate and early post-ROSC phases in patients who survive cardiac arrest. Further work is needed to understand the utility of rtCGM in critically-ill patients and to determine what, if any, clinical conditions may limit their use.

Informed consent was waived by the institutional review board. All patient health information was fully anonymized and cannot be identifiable.

This article is freely accessible at touchENDOCRINOLOGY.com © Touch Medical Media 2021.

The authors thank the diabetes education team at Stony Brook Medicine for their dedication to patient care, especially amidst a global pandemic and to Christopher G Parkin, MS, CGParkin Communications, Henderson, NV, for editorial assistance in manuscript development.