The type 2 deiodinase (D2) has an important role in hypothyroidism, where its ability to activate thyroid hormone provides justification for levothyroxine “monotherapy.” A prevalent polymorphism in D2, Thr92AlaD2, has been associated with improved well-being on “combination therapy” with T4+T3; the underlying mechanism is unclear as T4-to-T3 conversion appears normal. Novel studies indicate this might be a risk factor for neurodegenerative disease. If the relationship between Thr92AlaD2-expression and treatment preference is confirmed, personalized medicine may play a role in hypothyroidism.

Extrathyroidal production of the active form of thyroid hormone, T3, via deiodination of thyroxine (T4) provides physiologic justification for the treatment of hypothyroidism with levothyroxine (l-T4) “monotherapy”;1 T3 production outside of the thyroid gland is mediated largely by the type 2 deiodinase (D2). l-T4-treated patients exhibit stable levels of serum T32 and for decades clinicians have attributed this to adequate and consistent peripheral T4-to-T3 conversion.3,4 Accordingly, the majority of l-T4-treated patients achieve both clinical and biochemical euthyroidism, which is typically defined as normalization of the serum thyroid stimulating hormone (TSH).5,6 However, it has been recognized in more recent years that despite normalization of serum TSH, some patients suffer from residual hypothyroid symptoms and, in particular, cognitive complaints.7 Given the high prevalence of hypothyroidism, which afflicts more than eight million Americans alone,8 that about 12 % of treated individuals remain symptomatic represents a considerable portion of the population.7 Therefore, optimization of therapeutic response in hypothyroidism represents an important target for the public health.

Although l-T4-treated patients typically exhibit serum TSH, T4, and T3 levels within the normal range, this occurs at the cost of an elevated serum T4:T3 ratio.9 With that being said, a minority of patients fail to achieve normal serum T3 levels.10,11 One hypothesis to explain residual symptomatology in l-T4-treated patients is localized hypothyroidism within a particular tissue, for example, the brain. D2 is abundantly expressed within this T3-target tissue, and therefore it is logical to consider that a defect in the D2 pathway could result in localized brain hypothyroidism. If this were the case, the ability of “combination” therapy (treatment with T4+T3- containing regimens) to improve psychological parameters in some patients would be explained.12,13 However, superiority of combination therapy has not been demonstrated universally in clinical trials,5 leaving some to hypothesize that unique individual factors may characterize the subset of patients who do derive benefit from this therapeutic approach.

To this effect, a genetic factor has been associated with preference for combination therapy in hypothyroidism; patients with the Thr92Ala polymorphism in DIO2, the gene encoding D2, have demonstrated improved well-being when treated with combination therapy versus l-T4 monotherapy in a large clinical trial.14 This single nucleotide polymorphism, rs225014, results in a single amino acid substitution within D2’s instability loop.15 Given that this substitution occurs at a residue that is distant from the catalytic active site, it is not necessarily surprising that Thr92AlaD2 converts T4-to-T3 with normal kinetics when transiently expressed in cells.16,17 Similarly, these patients do not exhibit gene expression patterns consistent with hypothyroidism at the level of brain tissue,18 exhibit normal serum thyroid function parameters,17,19 and require equivalent doses of levothyroxine to normalize serum TSH levels.20,21

In addition to its association with treatment preference in hypothyroidism, the Thr92AlaD2 polymorphism has been associated with diverse conditions in population-based studies, including hypertension,22 insulin resistance,23,24 type 2 diabetes,25,26 bipolar disorder,27 mental retardation,28 low IQ,29 recovery from lung injury,30 osteoarthritis,31–33 and increased bone turnover34 (see Figure 1). As intact thyroid hormone signaling has been demonstrated across models, this suggests that mechanisms aside from localized hypothyroidism are likely responsible for the clinical phenotype associated with Thr92AlaD2-expression. 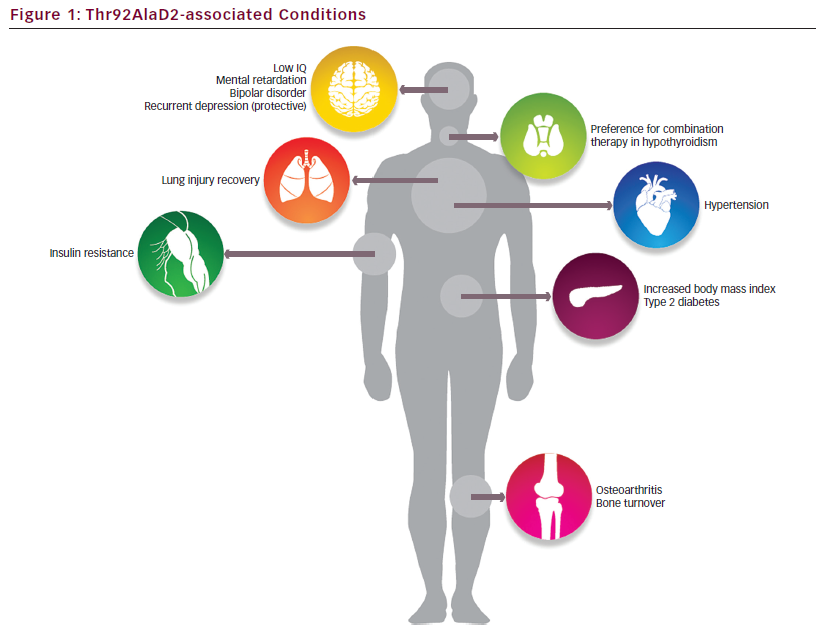 Translational studies have helped to define the molecular mechanism underlying the clinical phenotype associated with Thr92AlaD2- expression—stable expression of the Thr92AlaD2 protein in a human cell model modified the cellular environment such that the polymorphic protein had a prolonged half-life and was aberrantly located in the Golgi apparatus, where it perturbed Golgi morphology.18 When samples of human temporal pole were studied, there was an overlap in the gene expression patterns compared with the cellular model, suggesting for the first time that these cellular alterations might be the cause of a tissue-specific dysfunction within a D2-expressing tissue. Specifically, the transcriptome of the human temporal pole exhibited gene expression pathways that are enriched in neurodegenerative diseases.18 The concept that Thr92AlaD2-expression confers a genetic profile in the human cerebral cortex congruent with diseases such as Huntington’s suggests that further characterization of the clinical phenotype associated with

Thr92AlaD2-expression has the potential to transcend the thyroid field. Other D2-expressing tissues will also need to be studied to assess for tissue-independent patterns of transcriptional abnormalities. If carriers of the Thr92AlaD2 protein exhibit cellular perturbation throughout their D2- expressing tissues, this could explain the association with diverse clinical conditions seen in genome-wide association studies.

The concept of tissue-specific dysfunction in Thr92AlaD2 carriers should be explored in clinical trials and, in parallel, preference for combination therapy in hypothyroid Thr92AlaD2 carriers will need to be rigorously confirmed. If confirmed, translational studies will be needed to underpin the mechanism underscoring this predilection. Of course, this represents a significant frontier for future studies, but the potential for a role of personalized medicine in the treatment of hypothyroidism to improve the lives of millions of patients is of scientific and clinical priority

Elizabeth A McAninch, MD, and Antonio C Bianco, MD, PhD, have no relevant conflicts of interest to declare. No funding was received in the publication of this article. Open Access: This article is published under the Creative Commons Attribution Noncommercial License, which permits any noncommercial use, distribution, adaptation, and reproduction provided the original author(s) and source are given appropriate credit.