Various prandial insulins, including regular human insulin, aspart, glulisine, lispro and fast-acting insulin aspart (FIAsp), are used as part of basal plus, basal bolus, or prandial alone regimens. Some prandial insulins, also known as short-acting insulins, can also be used intravenously, or in insulin infusion pumps. The focus of this editorial is to classify prandial insulins, understand their pharmacological properties, and explore their use in current clinical practice. It also highlights the unique characteristics which allows preferential use of these insulins in specific clinical situations.

Insulin is an essential part of glucose-lowering therapy. Most recommendations on glucose lowering therapy focus on the insulin regimens to be chosen for initiation and intensification.1,2 Debate and controversy usually revolves around the choice of basal versus a premixed regimen as initial insulin therapy.3 In such a scenario, the importance of prandial insulins, and of specific prandial insulin preparations, is often ignored. This review explores the similarities and differences, of various prandial insulin preparations, and shares insights into their differential utility in diabetes care.

The various types of prandial insulins available globally can be classified as rapid-acting human insulin, fast-acting insulin analogues and ultrafast-acting analogues (Table 1). This classification is based upon the origin of insulin and its pharmacokinetic properties, specifically the onset of action. Though pharmacological in nature, this taxonomic structure has clinical utility as well. It informs the timing of injection with relation to meals, and allows flexibility in administration of ultrafast-acting insulin. The similarities and differences between the various prandial insulins are listed in Table 2. Many of these insulins, are also available as biosimilars, such as regular insulin and lispro.

Prandial insulin can be administered via an intravenous or subcutaneous route, and rarely as intramuscular injections.6–8 It can also be mixed with total parenteral nutrition bags for central intravenous delivery. The structural differences between various analogues impact their compatibility with different intravenous fluids. Thus, while insulin glulisine is compatible with normal saline and Ringer’s lactate, it cannot be used in dextrose-containing solutions. The other prandial insulins can be diluted with all commonly used intravenous crystalline fluids. This allows the unrestricted use of regular human insulin, aspart, lispro, and FIAsp in hospital settings. Insulin stewardship programmes of critical care units and hospital wards should reflect the preparation and concentration of prandial insulins that are used, as well as their mode of delivery.9 Reduction in morbidity and mortality has been associated with insulin aspart in hospital settings.10 Insulin aspart with a better efficacy and safety profile than short-acting human insulin appears to be a good alternative to short-acting human insulin.10 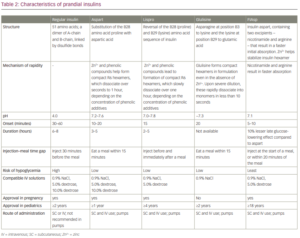 In some countries, availability of U40, U100, and U500 insulin vials and syringes increases the probability of dosing error unless patients are informed and acquainted with various types of vial and syringe at the time of initiating insulin therapy. Patients should be informed that U100 vials are to be used with U100 syringes and U40 vials with U40 insulin syringes only.11

Less than 2 years after its approval, Exubera was withdrawn from the market due to several product-related disadvantages, and had “failed to gain acceptance by patients and physicians,” which resulted in poor sales volume.13 Hypoglycemia was demonstrated to be the most common side effect of Exubera. Many respiratory adverse effects were reported, including increased risk of respiratory infection, cough, pharyngitis and rhinitis. A safety label change was issued regarding lung cancer when six newly diagnosed cases of lung malignancies were found in patients taking Exubera.14

Afrezza appears to have key advantages over Exubera. Its delivery system is small, sleek, and dosed in units and it provides a simple dosing conversion chart, whereas Exubera’s delivery system was large, awkward, and dosed in milligrams.12 Afrezza’s safety profile resembles that of Exubera, with a decline in pulmonary function and a slight increased incidence of lung cancer. New concerns were brought forward after Afrezza’s approval, prompting the US Food and Drug Administration (FDA) to require a risk evaluation and mitigation strategy and a black-box warning informing patient of an increased risk of acute bronchospasm in those with chronic lung disease.15 Diabetic ketoacidosis was also found to be more common in patients in the Afrezza cohort.15

When prandial insulin is used subcutaneously, it can be utilized as part of a basal plus, basal bolus, or prandial-only regimen.18 In all these regimens, the insulin is administered prior to meal. The ideal injection–meal time gap varies depending on the prandial preparation. While all prandial insulins are effective in this setting, safety tolerability and convenience are the deciding factors in making a patient-centered choice of insulin. Human regular insulin remains the most economical insulin worldwide, but may not be available in certain countries. Human regular insulin should be injected 30 minutes prior to a meal, but this limits its flexibility.19 The fast-acting analogues offer greater flexibility and are surpassed in this regard by ultrafast-acting analogues. While aspart, lispro and glulisine can be injected immediately before a meal, FIAsp can be administered up to 20 minutes after a meal20 However, availability may vary from country to country.

Another advantage of the ultrafast-acting FIAsp is its faster onset and peak of action, which leads to a better resolution of 1-hour postprandial glycemia.21 This is of help in clinical situations such as gestational diabetes and corticosteroid-induced diabetes, and in people with dietary preferences for high-carbohydrate and high-glycemic-index meals. The relatively faster reduction in insulin action translates in to a lower risk of pre-meal hypoglycemia with FIAsp (as the overall duration of action of this insulin is slightly less than insulin aspart). In the same context, there are data suggesting that there is a reduced risk of night-time hypoglycemia with use of FIAsp when used at dinner time, due to its reduced duration of action, compared to fast-acting insulin analogues (aspart, lispro or glulisine) whose duration of action may last longer into the night.21 This reduces the degree of inconvenience in the patient’s lifestyle related to use of prandial insulin, and allows greater freedom in planning physical activity, exercise, or leisure activities such as eating at a restaurant where the quantity of carbohydrates/calories can be unpredictable (and where FIAsp can be taken after completing the meal). It also obviates the need for a 3+3 meal pattern that has been conventionally enjoined in basal bolus regimens.

The ability to inject fast- and ultrafast-acting insulins immediately before, or even after a meal, allows one to adjust insulin doses according to appetite or carbohydrate counting. This flexibility is especially advantageous in the very young and elderly, and in people with impaired appetite, nausea or risk of vomiting, such as those with renal, hepatic or upper gastrointestinal impairment. FIAsp has been reported to have faster kinetics if injected intradermally in in-vivo studies.22 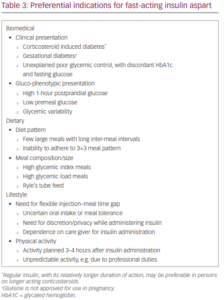 Insulin pump therapy is based on the use of short-acting or prandial insulin as a continuous subcutaneous infusion, to maintain basal insulin levels. Prandial dosing is provided by pressing the pump buttons at meal times based on predetermined insulin-to-mealtime carbohydrate ratios. This insulin delivery vehicle adjusts basal insulin rates and bolus insulin rates in a more precise fashion, especially in type 1 diabetics and brittle diabetics. Newer technologies, such as continuous glucose monitoring systems are paired with newer pumps (for example the MiniMed™ 670G, Medtronic, Dublin, Ireland) and can adjust basal rates in these pumps automatically based on the patient’s blood-glucose levels, using self-learning cloud linked algorithms (IBM Watson cloud used by Medtronic 670G closed loop hybrid system).

The physicochemical dissimilarities between various insulins lead to differences in stability, compatibility and utility in insulin pump or infusion systems. In studies, insulin aspart was found to be more stable than insulin glulisine during continuous subcutaneous insulin infusion in terms of physical stability against formation of insoluble insulin fibrils, as well as chemical stability in terms of soluble high-molecular-weight proteins formation.23,24

In patient-centered management of diabetes, one should try to provide effective, safe glycemic control, with minimal intrusion into the patient’s lifestyle. The pharmacodynamic and pharmacokinetic properties of a prandial insulin should allow it to offer flexibility in route and timing of administration, dosage, choice of meal pattern; and ability to plan physical activity, exercise or leisure activity. This additional feature may improve patient adherence to insulin therapy also.20 Modern ultrafast-acting prandial insulins can offer this flexibility. If availability, access and affordability are not a concern, such insulin preparations should be preferred for use in the management of diabetes. Clinical situations which are preferential indications for FIAsp are listed in Table 3.

We reiterate that, irrespective of the insulin preparation used, correct injection technique must be followed. There is no substitute for proper insulin technique, which ensures that the correct dose of insulin is administered, in a comfortable manner, into healthy subcutaneous tissue, at the appropriate time.25

This brief review offers a patient-centered approach and clinically-oriented insight into the use of various prandial insulins. It classifies and describes these preparations, and shares suggestions regarding their rational use as intravenous and transitional subcutaneous insulin. This article underscores the flexibility that ultrafast-acting insulin allows in diabetes care today.

Sanjay Kalra, Nikhil Gupta and AG Unnikrishnan have received speaker fees from Eli Lilly, Novo Nordisk and Sanofi. Vishal Bhatia and Feroz Amin have no conflicts of interest to declare in relation to this article.

The named authors meet the International Committee of Medical Journal Editors (ICMJE) criteria for authorship of this manuscript, take responsibility for the integrity of the work, and have given final approval for the version to be published.