Abnormal eating behaviors involve deliberately adjusting food intake to the point of it being insufficient or excessive, which tends to harm the physical and mental health of an individual.1 The concern often exists amongst students regarding their body image, specifically around being overweight and obese. This ideology may be influenced by societal pressures as a slim body is widely considered to be physically attractive.2,3 An expansive range of techniques to lose weight have been promoted to capitalize on this mindset, including hypocaloric diets, restrictive eating habits, nutritional compounds, pharmaceutical products, and extreme measures to reduce calorie intake, such as skipping meals entirely.4–6 Studies have shown clear associations between the perception of body weight, body image, and the appearance of disturbed eating behaviors among undergraduate universities’ students. 2,3,6,7 The body mass index (BMI) is an anthropometric tool calculated using the height and weight of an individual. It is an easy screening method to identify those who are overweight or obese and thus at greater risk of health problems.

The target population comprised students enrolled at MAHSA University in Malaysia studying a range of different academic disciplines. A convenient sample of 300 participants was included in this study.

Students who agreed to participate in the study were given a set of questionnaires that included a participant information sheet outlining the objectives of the study, study design, methodology, expected outcome, significance of the study, and a statement confirming confidentiality of the collected data , a consent form, a socio-demographic questionnaire, and the Eating Attitude Test 26 (EAT-26) questionnaire. A total of 300 copies of the self-administered questionnaire sets were distributed among students with a 100% response rate. Anthropometric measurements including height, weight, and waist circumference were taken. Using the obtained measurements, the BMI of the respondents was calculated as weight divided by height squared (kg/m2). Waist-to-height ratio was also calculated.

The socio-demographic questionnaire included information about the demographic characteristics of the students such as their age, gender, university course they study, year of study, and faculty.

The EAT-26 tool (English version) was used to screen for eating-disorder characteristics and behaviors among students. The EAT-26 is widely used and was designed to provide a standardized measure of symptoms and characteristics of abnormal eating behaviors.12 The validity and reliability of the scale items showed internal consistency, and a Cronbach’s alpha of 0.82.

The EAT-26 consists of 26 items. Each item (except the 25th item) has six response options ranging in value from 0 to 3 (“always” = 3; “almost always” = 2; “often” = 1; and “seldom”, “hardly ever”, and “never” = 0). Item 25 has a reversed score (“always”, “nearly always” and “often” = 0; “seldom” = 1; “almost never” = 2; and “never” = 3). The total score of EAT-26 equals the sum of scores for the 26 items. A score of ≥ 20 is defined as being characteristic of a “disordered eating attitude”. The EAT-26 questionnaire also includes five behavioral questions that are used to assist in determining eating behavior over the past 6 months, given before answering the questionnaire. These questions investigate eating “binges”, defined as eating much more than most people would under the same circumstances and the feeling that eating is out of control. It also includes questions to investigate whether a person has made themselves sick (self-induced vomiting) or used laxatives, diet pills, or diuretics to assist in controlling their weight. The behavioral questions investigated whether a person exercised for more than 60 minutes per day to lose or to control his/her weight and whether there had been a weight loss of 10 kg or more in the past 6 months.12

Data entry and analysis were performed utilizing the Statistical Package for the Social Sciences (SPSS), Version 24. Basic descriptive statistics were run for all variables to establish means and standard deviations for variables measured on continuous scales, and frequencies and percentages for categorically measured variables. Correlation analysis was conducted to examine the association between eating behaviors and the BMI of the study participants and an independent t-test was used to determine the association between abnormal eating behaviors and gender; p<0.05 indicates a significant result.

The ethics committee of MAHSA University approved the study (approval number: RMC/EC50/2019). Participants signed an informed consent form after the purpose of the study had been explained and were assured about the confidentiality of their responses.

According to ANOVA test, there was insignificant difference between the groups in the mean score of EAT-26 (Table 3).

The independent t-test revealed that female respondents have a significantly lower waist–height ratio as compared with male respondents (p=0.01), and they scored significantly higher than males in the EAT-26 score (p=0.04). There was no gender difference in BMI of the study sample (Figure 1). 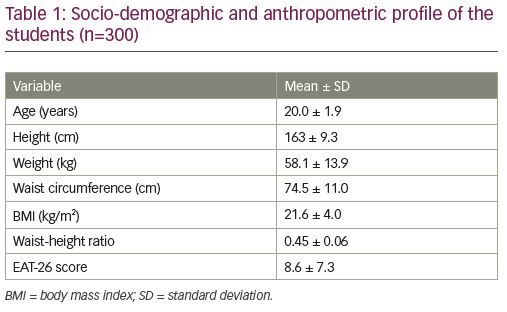 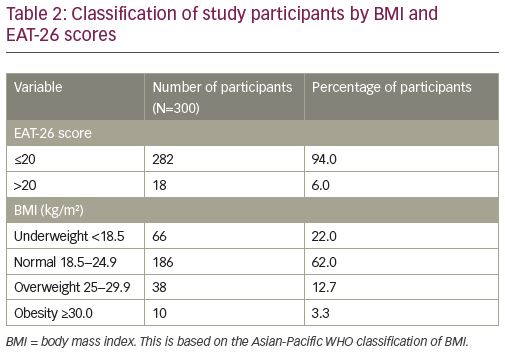 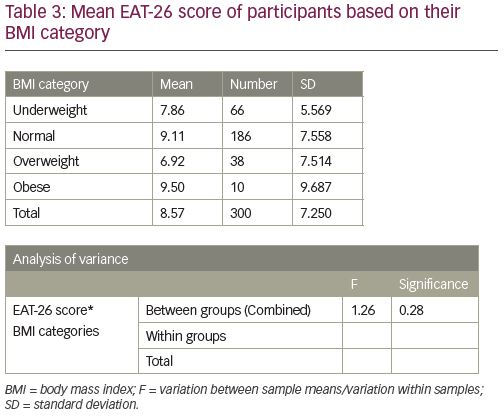 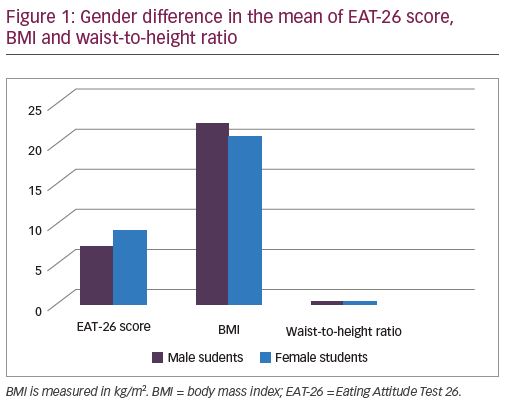 The eating behavior section of the EAT-26 scale indicated that out of the 300 students, 57.8% (n=173) felt that they were eating much more than most people would under the same circumstances and felt that their eating was out of their control. A total of 13.0% (n=39) and 13.3% (n=40) of the students induced vomiting or used laxatives, diet pills or diuretics, at least once within the previous 6 months to control their weight. It was also found that 65.3% of the students (n=196) exercised for more than 60 minutes per day to lose or to control their weight. Only 8.7% (n=26) had lost more than 10 kg in the past 6 months.

The present study reported a 6% prevalence of abnormal eating behaviors among students at MAHSA University. The majority of students (around 79.3% of the study sample) were from medical professional courses such as health and sports sciences, medicine and biomedical sciences, dentistry, pharmacy, nursing, and midwifery. The study findings showed a higher prevalence of abnormal eating behaviors among female students, which could be due to increasing societal pressure for females to maintain a low body weight. The body type many aspire to is to be thinner than ever before, yet the average weight of young women has increased, resulting in a discrepancy between the ideal body image and the actual body size of females, as shown in a study conducted among 657 female university students located in Seoul, Busan, Ulsan, Daejon, Chungcheongnam-do, and Gangwon-do, South Korea.11,12 This study reported lower BMIs in female Korean students than in female European and American Caucasian students; however, the dissatisfaction of female Korean students with their appearance was greater than that of the European and American students, indicating that more female Korean university students were suffering from an eating disorder.12 This is in agreement with another study conducted in an Indian medical school, which reported a 4.7% prevalence of eating disorders, all among females.13 In addition, a study conducted in the USA found a significantly higher prevalence of eating disorder symptoms, such as loss of control over eating, fasting, body avoidance, body checking, and binge eating, among women aged 18–35 years.14 A review of research concluded that although women seem to be at greater risk of developing eating disorders, the prevalence of such a problem is increasing among males, highlighting the importance of evaluating eating disorders among males as well.15,16

In terms of predicting the consequences of being overweight or obese, measuring waist circumference and calculating waist-to-height ratio has been demonstrated to be of greater value than assessing BMI.22 The association between abnormal eating behaviors and waist-to-height ratio reported in our study is in agreement with the findings of a study conducted in Croatia among adults aged between 18 and 93 years, which reported that waist-to-height ratio is the most important anthropometric measure in terms of predicting lifestyle and psychological risks for obesity.23 Lifestyle factors such as the availability of convenience and fast food, study time patterns, and staying alone and away from home might contribute to abnormal eating attitudes. Lack of physical activity can also contribute to an increase in body weight and a resulting change in eating habits.24 A study conducted among the adult population in the UK has proved that waist-to-height ratio was able to identify more people at an early risk of the health consequences of obesity than other measures of obesity, such as waist circumference and BMI.25 Many studies have shown that obesity in adult age could be caused by various psychological risk factors during childhood, such as maltreatment, separation of parents or their death, and mental disorders, e.g., early onset major depressive syndrome, binge-eating disorders, and tobacco use.26–36

Limitations of the study and future research

The present study was conducted in one institution, MAHSA University. Future research conducted in a larger sample size that includes students from other institutions and fields of study are recommended to strengthen our conclusions and enable greater generalizability. Carrying out a longitudinal study, whereby the same study sample is observed repeatedly to obtain an accurate result, may also be of value to understand eating behaviors among students. The present study results showed an association between abnormal eating behaviors with BMI and waist-to-height ratio, but not causation; future research is encouraged to examine the causation of abnormal eating behaviors among students. Implementing nutrition and health awareness programs may benefit those who exhibit abnormal eating behaviors. Another limitation of the study is the use of the convenient sampling method; it is recommended to use random sampling in future studies.

The study was approved by the ethics committee of MAHSA University (approval No. RMC/EC50/2019). Informed consent was received from the participants involved in the study.

Special thanks to all participants and the Faculty of Medicine Research Committee at MAHSA University. 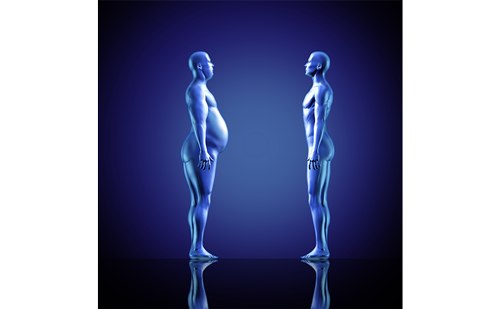